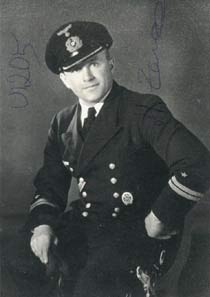 The assessment of convoy attacks, particularly at night, always proved difficult and the first assessments made after the war were often based only on the basic information available back then. In the case of convoy HG-73 the lack of suitable information at the time led to preliminary conclusions by Dr. Jürgen Rohwer, the leading authority on U-boat successes that will be reassessed in this article.

Usually the primary sources used for the assessment of U-boat attacks are the war diaries (KTB) and the torpedo firing reports of the attacking U-boats for the German viewpoint of the events and the report of the convoy commodore and the senior officer of the escort (SOE) for the Allied side. The Allied reports for convoy HG-73 are sketchy because the convoy commodore’s ship was one of the first ships hit in the U-boat attacks and due to the confusion resulting from the attacks occurring at night.

Two U-boats reported successful attacks on convoy HG-73 during the night of 25/26 September 1941. The first was made by U-203 (Mützelburg) at 00.31 hours. The U-boat fired a spread of four torpedoes at two of the biggest ships in the convoy but could not observe the results because they had to crash-dive after the attack. They did however hear four detonations. U-203 avoided a depth charge attack, reloaded the torpedo tubes and resurfaced after three hours. They then saw an escort lying close to a stopped tanker, apparently to rescue survivors from the torpedoed ship as Mützelburg thought. At 04.01 hours and 04.04 hours, the U-boat attacked the destroyer with one and two torpedoes respectively, but missed and left at full speed to reload the torpedo tubes again. Returning to the area they found the stopped tanker again and hit it amidships with one torpedo at 06.34 hours, observing the ship sink within 3 minutes.

The incomplete Allied reports mention the Varangberg and Avoceta (the convoy commodore’s ship) being hit in the first attack and the Cortes, Petrel and Lapwing in the second, but U-124 could not have hit more than two ships in her attack as she only fired two torpedoes. Earlier assessments credited U-203 with damaging Cortes and assumed that she was the ship finished off at 06.34 hours.

The following assessments were made in “Axis Submarine Successes”:

But according to the survivor’s report, the Lapwing had not been hit at the same time. Being in station #13 they observed how the Cortes in station #12 and then Petrel in station #11 were hit and sunk and stopped to pick up survivors. Just before the rescue work was finished, Lapwing was herself torpedoed about 4 hours after the other ships had been hit. The conclusion from this and the survivor’s reports of the other ships is that the first attack of U-203 hit two ships: Varangberg (2 hits) and Avoceta (1 hit). The attack by U-124 sank Cortes and Petrel, while Lapwing stopped to rescue survivors and was located in this vulnerable situation by U-203. Mützelburg mistook the small coaster with its engine aft as tanker and wrongly assumed that the ship had stopped because it has been torpedoed in an earlier attack.

Our reassessment for “Axis Submarine Successes”:

During the next night of 26/27 September 1941, again two U-boats reported successful attacks on convoy HG-73. This time the first attack was made by U-124 (Mohr) at 23.35 hours. The U-boat fired one torpedo at a steamer which sank fast after being hit aft.

At 02.08 hours, U-201 (Schnee) fired a spread of two torpedoes at a steamer of 5000 tons and a corvette, observed a bright flash close to the escort and a steamer sinking immediately. Turning around the U-boat then fired the stern torpedo at steamer of 3000 tons but missed. At 02.11 hours, they attacked the missed steamer with a spread of two torpedoes and observed two hits.

The following assessments were made in “Axis Submarine Successes”:

The Allied reports are incomplete for this night, but the report of the commander of the fighter catapult ship HMS Springbank provides some new information that makes a reassessment necessary. According to his report the first ship hit was on the port side of the convoy and to avoid an attack moved his ship between column 4 and 6 on the starboard side. At 00.13 GMT, the Leadgate in station #41 ahead of his ship was torpedoed, then a torpedo passed between the ships and shortly afterwards HMS Springbank was hit by two torpedoes.

The Admiralty convoy report states that Siremalm was torpedoed at 21.35 GMT, so she was the ship hit first. This is also confirmed by her position in the convoy, the station #23 being on the port side as observed by the commander of HMS Springbank. Contrary to the above mentioned report the British steam merchant Leadgate was in fact not torpedoed, but it is quite possible that the bright flash observed by U-201 was a premature torpedo detonation close to Leadgate. The stern torpedo and the second spread of two torpedoes were then aimed at HMS Springbank. This only leaves the question: when was Cervantes torpedoed? Judging from her position in the convoy Cervantes in station #53 was apparently the ship observed to sink after U-201 had fired the first spread of two torpedoes.

Our reassessment for “Axis Submarine Successes”:

Note: This analysis was sent to Dr. Jürgen Rohwer for review and he confirmed our findings.

Thanks to Mark McShane for assistance in obtaining the survivors reports.