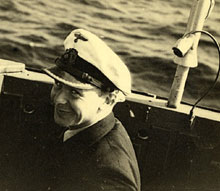 Underwater sound detector is a hydro acoustic device intended to separate target's sound waves from sound waves of environment. In this case, the target is a surface ship or a submarine, and the environment is an ocean. The ultimate intention is to detect being of any object (a ship or a submarine) in the vicinity of the underwater sound detector and, if that is possible, direction and range of the object.

There aren't two ships (or two submarines) with same noise. There are some characteristics ship's noises:

The first underwater sound detectors functioned by principle of "sound shadow". Two hydro-phones were mounted on underwater part of a ship's bow, each hydro-phone on each side of the bow.

Captured underwater noise was transmitted directly from the hydro-phone to operator's ear-phones. The each ear-phone was connected with the one hydro-phone. By strength of noise in particular ear-phone, the operator detected from which side (starboard or port side) the noise coming. The ship turned round until the noise was now same in booth operator's ear-phones. When the noise was same in the both ear-phones the ship's crew knew that the ship is on course to the source of the noise, i.e. to the submarine. Range of that first underwater sound detectors was up to 4 nautical miles, accuracy was from 15 to 20 degrees.

The first hydro-phones functioned on principle of magnetostriction or piezoelectricity. Mechanical vibrations of membrane, evolved from underwater noises, were converted into electric voltage, which was brought to the ear-phones. Underwater sound detectors based on binaural method (binaural- "for both ears") were installed in 1917. Their hydro-phones were mounted on a both ends of special handle, which was mounted on underwater part of a ship's bow. Distance between the hydro-phones had to be at least 0.95 metres. The underwater sound detector operator turned round the handle, around the handle's centre, until a detected noise was not same in both ear-phones. Range of detecting was enlarged. Accuracy was from 3 to 4 degrees. Underwater sound detectors based on binaural method were also used in WW2.

acoustic system: group of piezoelectric hydro-phones (up to 24 hydro-phones) who changed sound vibrations into electric energy,

Some underwater sound detectors had also a filter for choice of wave (i.e. noise's) band, mostly to avoid own noises.

5. Definitions of some technical expressions mentioned in the article

Cavitation. The rapid formation and collapse of vapor pockets in a flowing liquid in regions of very low pressure, often a frequent cause of structural damage to propellers, pumps, etc.

Electrodynamic. Pertaining to the force of electricity in motion.

Hydrophone. A device for locating sources of sound under water, as for detecting submarines by the noise of their engines.

Magnetostriction. A change in dimensions exhibited by ferromagnetic materials when subjected to a magnetic field.

Heterodyne. Noting or pertaining to a method of changing the frequency of an incoming radio signal by adding it to a signal generated within the receiver to produce fluctuations or beats of a frequency equal to the difference between the two signals.

And, don't forget that the first task of any submarine is to stay undetected.