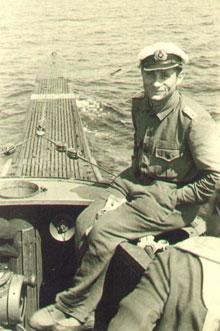 Since this article was posted, U-534 has moved to the Woodside Ferry Terminal, Birkenhead. See www.uboatstory.co.uk for details.

Guided tours on the boat are available by priot appointment. These cost 12.50 British Pounds per person and include a tour of the U-boat itself, a short video on the salvaging of the boat, and an entry to the U-boat museum containing artefacts salvaged from the U-534. Children under 16 are not allowed and no photographs can be taken within the U-boat.

The first time you see U-534 is when you approach over the many bridges interconnecting the massive dock complex at Birkenhead.

She is hard to see at first as her red oxide colour, after decades under the Sea, is similar to the brick masonry of the massive warehouse behind her. This effect, from this first vantage point, makes the boat look proportionally smaller than she really is. However, as you drive into the car park of the Historic Warships Society it seems that you pass under the bows and it is only then that you can really appreciate her size

U-534 is now housed in a secure compound and is sitting upon a framework of iron blocks and girders the latter of which are slightly bowed due to the tremendous weight above. This set-up gives access to the underside of the hull, the inspection of which, showing the damage caused by the depth charges, is saved until the last moments of the tour.

The boat is two storeys high on her mountings and so a covered staircase has been built for safe access which tops out onto a platform to the rear of the re-constructed conning tower. From this position our Guide pointed out the various parts of the infrastructure, such as the rechargeable air bottles, that usually lie hidden from view under the original wood deck planking long since eaten away.

Passing down the side of the conning tower we descended into the boat via the 22 inch forward torpedo hatch, where my first impressions once inside were that it was cosy and surprisingly spacious, but as the inventory of what would originally have been found in this compartment was revealed by our guide such as ' a floor ' , bunks, torpedoes, fifteen men and stacks of provisions it soon takes on a different aspect.

Looking around, everything was a shade of orange and stalactites of iron oxide were hanging from every valve and pipe, here or there the odd white label with its German script was visible. Further to this a strong smell of diesel and dampness pervades throughout the boat and provides an additional sensation.

We moved through the various compartments with restrained excitement, it was as though we had just discovered her for ourselves. Wires were still hanging from the ceiling and ceramic fuses lay around the floor of the wireless room, the Commanders safe door lies open, bent by the salvage crew searching for clues to her secret mission. On the seabed an airlock preserved parts of the original ceiling and the sky blue colour can clearly be seen, some of the wooden fitments are still intact and the tiles on the floor of the galley, once black and white are now orange and brown.

Passing through the control room, engine room and motor room we enter the stern torpedo room. Here the depth charge dropped by the Liberator on the deck, rolled over the side and set to 10 feet, blew in the side of the pressure hull.

Rich evidence can be seen of what a depth-charge can do, and it is frightening. The side is stoved in and light from the outside was shining through, the bulkhead door and floor were buckled and a large piece of machinery displaced during that fateful day was still lying where it fell. It is easy to see why so many of these boats went down with all hands once the vital pressure hull was breached.

Our party spent some time here, and tales were told. We talked of the Liberator aviator rescued by the Germans in their lifeboat but dead on reaching shore, the young German crewman who didn't exhale and perished, the possible reasons why an Argentinean civilian would be on board, salvage crewmen scratching machinery to see if it was gold, batteries still working, and of the reasons why a Danish media executive would spend millions of pounds on lifting her from the bottom of the sea. But, the internal tour was over, it was time to disembark, and our exit was slow, eleven persons only, yet it took a few minutes for the tour party to climb onto the deck via the stern torpedo hatch, and this was without any injuries, the enveloping sea and of course withering enemy fire.

Once outside and back on ground level, inspection can be made of the aerial attack, the strafing and subsequent external depth charge damage. There is evidence of the salvage operation and as a bonus one of the original 20mm anti-aircraft guns, restored and elevated skyward.

On departure many of the visitors, some senior citizens were sharing stories, one had been on convoy runs, another a South African told of ex-submarine MAN diesels in his mine, but sadly we all had to go and made our exit, passing underneath U-534, reaching out and running our hands along the hull as a final gesture of parting.