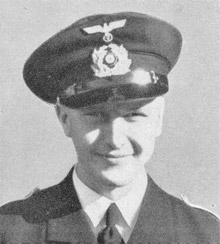 It left Germany on its first operational patrol on 20 February 1943, returning to its base at Lorient, France on 30 March. Thereafter it made a total of six operational cruises into the Atlantic before surrendering on the last of these to the Royal Canadian Navy on 11 May 1945.

U-190 does not appear to have been all that successful, in that during the first five of its cruises, under Kapitänleutnant Max Wintermeyer, it sank only one allied vessel - the 7015 ton cargo ship Empire Lakeland on 8 March 1943. It fired torpedoes on a number of other occasions, but without result. It was to have one other success on the last of its cruises, and this was to bring it firmly within the context of Canadian naval history.

U-190 after its surrender in Canada

Under a new commander, Oberleutnant zur See Hans-Edwin Reith, U-190 left a base in Norway on its sixth and final mission on 22 February 1945. Equipped with a schnorkel and armed with 6 contact torpedoes and eight T-5 Gnat acoustic Torpedoes, it mission was to interdict allied shipping off Sable Island and the approaches to Halifax harbour. It was in fact part of new strategy on the part of the commander-in-chief of the German Navy, Admiral Karl Dönitz, initiated in the dying days of the Nazi regime, to increase pressure on shipping in North American waters in an attempt to ease allied naval pressure in waters closer to home.

Early on the morning of April 16 the Boat was sitting in a favourite spot off the Sambro light ship when a pinging on the hull indicated that her position was being picked up by ASDIC signals from a vessel on the surface. The ASDIC was in fact aboard the Canadian Bangor class minesweeper, HMCS Esquimault, engaged in carrying out a routine patrol of the area. Perhaps lulled into a sense of ease by the news of the imminent German collapse in Europe, she was observing none of the standard security measures that were mandatory for vessels operating in these waters. She was not zig zagging as required, she was not streaming her Canadian-designed Cat gear, developed specifically to deflect attacks from German Gnat Torpedoes, and she had even turned off her (admittedly obsolete) radar. And no-one on board seemed aware that the ASDIC had in fact picked up a contact. Below the waters the crew of U-190 was sure that they had been located. And when the Esquimault suddenly turned towards them and headed directly towards their periscope they were convinced that an attack was being made. Reith swung about and fired off one Gnat torpedo from a stern tube, expecting that it was fired too close to have any effect, as he desperately attempted to get clear of the perceived danger.

The torpedo in fact hit home, tearing into the Esquimault's starboard side. She immediately began to list to starboard and sank within four minutes. She was the last Canadian vessel to be lost due to enemy action in the Second World War. 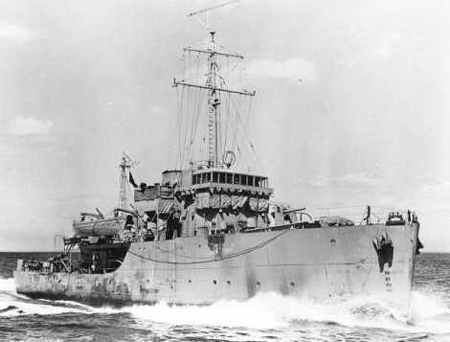 While eight of Esquimault's crew probably went down with her, the remainder escaped and managed to get into Carley floats on the water. Its sinking was so rapid, however, that there was no time to send out distress signals, with the result that it was hours before anyone realized what had happened and not until eight hours later that HMCS Sarnia first came across any survivors. During this period a total of 44 had died of exposure, and only 26 remained alive. Reith's report to U-Boat headquarters recorded that the minesweeper had gone down at the map sighting of 44°.28' N / 63°.10' W. This accords with the subsequent findings of insurance investigators, who located the hulk at 44°.26' N / 63°.10' W.

After its encounter with the Esquimault, U-190 successfully escaped the area and remained on patrol off the Canadian coast until instructions were received from Dönitz to surrender on 8 May. Reith and his boat were finally intercepted by Canadian corvettes 500 miles of Cape Race in Newfoundland on 11 May. Within hours her captain had signed a document of unconditional surrender. With the white ensign flying from her masthead, she sailed under Canadian escort into Bay Bulls, Newfoundland, on 14 May. The crew were then taken as prisoners to Halifax.

In June 1945 U-190 and another U-Boat that also surrendered at Bay Bulls, U-889, were officially commissioned into the Royal Canadian Navy. At the end of the year a tri-partite commission consisting of the United States, Britain, and the Soviet Union, agreed that each of the three power would be able to retain 10 U-Boats each; all others were to be destroyed. U-889 was ceded to the United States and was sailed by a Canadian crew to Portsmouth, New Hampshire, in January 1946. U-190 was ceded to Great Britain, which in turn agreed that it should be retained by Canada.

One of U-190s first duties as a vessel of the Royal Canadian Navy was to undertake, in the summer of 1945, a ceremonial tour of communities along the St. Lawrence River and Gulf of St. Lawrence, with stops in Montreal, Trois Reviéres, Quebec City, Gaspé, Pictou, and Sydney. Back in Halifax it commenced duties as an anti-submarine training vessel, which role it continued to fulfill until paid off on 24 July 1947.

On 21 October 1947 occurred "Operation Scuttled" when, in an event with distinctly Wagnerian overtones, U-190 was at last sent to the bottom. I can do no better than to quote the description of its end in Michael Hadley's indispensable book, U-Boats Against Canada:

"Operation Scuttled" marked paid to U-190s account. Touted on two occasions in the press as an exercise designed to train inexperienced post-war recruits in the art of combined operations, it was in fact a final touch of rather raffish theatre. Painted in bright red and yellow longitudinal stripes, U-190 was towed to the spot where it had sunk HMCS Esquimault, and where at precisely 1100 hours on 21 October 1947 the tradition-bound RCN intended to celebrate Nelson's "glorious" Trafalgar Day victory over the French fleet in 1805 by pounding the empty hulk into the depths. While the hapless "enemy" drifted, the "friendly" forces gathered for the kill: Tribal Class destroyers HMCS Nootka ..., HMCS Haida ..., and the Algerine minesweeper New Kiskeard [sic] .... The Naval Air Arm provided a collection of "string bag" aircraft: eight Seafires, eight Fireflies, two Ansons, and two Swordfish. The scenario, staged for twenty-four representatives of press and radio, called for a carefully choreographed sequence of battle escalating from airborne rocket attack to the grand finale of destroyer bombardment with 4.7 inch guns and a death blow with Hedgehog. The RCN's final sally against a German U-Boat ended on much the same comic operatic note as its first foray against suspected invaders off Quebec City in 1939 .... Almost before the ships had a chance to enter the act, U-190 pointed its bows into the air after the first rocket attack and slipped silently beneath the sea. And thus, the RCN press release announced with inflated pathos, "the once deadly sea raider came to a swift and ignominious end" - just 19 minutes after "Operation Scuttled" had begun.

Thus the hulk of U-190 indeed lies on the ocean floor off the approaches to Halifax Harbour, somewhere near the hulk of its former prey, HMCS Esquimault. The latter is known to lie at the location 44°.26| N / 63°.10| W (which is near the Sambro Light Vessel). Somewhere near here is likely to be found the rusting hulk of U-190, doubtless still bearing some signs of the red and yellow painted longitudinal stripes that the Canadians had applied shortly before its end, its hull spotted with the damage caused by the aircraft-fired rockets that had sent it to the bottom, and doubtless stripped by the RCN of any useful or interesting interior appurtenances. An unfortunate end for a vessel that had played such a significant part in the story of the great contest between German U-Boats and the Royal Canadian Navy off our east coast in the Second World War.