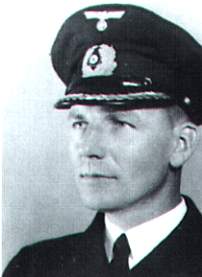 Paul Hartwig joined the U-boat force in July 1940 and after five months of training he completed two patrols on the successful U-125.

In March 1942 he commissioned the type IXC boat U-517 and on the boat's first patrol in Canadian waters during the summer of 1942 he sank nine ships.

BdU Admiral Dönitz commented on the patrol: "Outstanding first patrol of commander with a new boat." Unfortunately U-517 was sunk just four days after leaving Lorient on her second patrol (Niestlé, 1998). Paul Hartwig spent the time from November 1942 to the end of the war in Allied captivity.

After the war Hartwig joined the newly formed Bundesmarine and during the 1970s rose to the rank of Vice Admiral.

He passed away on 9 March 2014 at the age of 98. His obituary contained these words: "He was blessed in that he could look back on his life as a success."