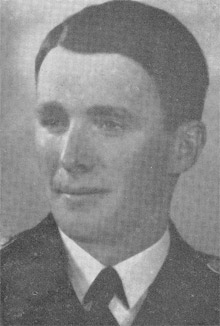 Erich Würdemann began his naval career in April 1933. Later he served on the destroyer Paul Jacoby, where he made 11 patrols in the first year of the war. In November 1940 he transferred to the U-boat force. After the usual training he served for one patrol on U-43 under Kptlt. Wolfgang Lüth.

In September 1941 he commissioned the ocean-going U-boat U-506 and operated on his first patrol in the North Atlantic. On his second patrol he sank no less than nine ships. On the third patrol U-506 was involved in the famous Laconia incident. Later the boat operated as a Monsun boat in the Indian Ocean.

Six days after leaving base on her fifth patrol, U-506 was bombed in the Atlantic west of Vigo, Spain by a USAAF aircraft on 12 July 1943. Kptlt. Erich Würdemann and all but 6 of his crew perished (Niestlé, 1998).