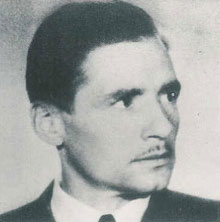 Shortly after the sinking the crew of U-156 was amazed to hear Italian voices in the sea amongst the people both in lifeboats and also struggling in the water itself. Hartenstein immediately began rescue operations and radioed for assistance, both from nearby U-boats and also sent out un coded messages to every vessel around to assist, promising to cease hostilities.

If any ship will assist the ship-wrecked 'Laconia'-crew, I will not attack providing I am not being attacked by ship or air forces. I picked up 193 men. 4, 53 South, 11, 26 West. - German submarine. 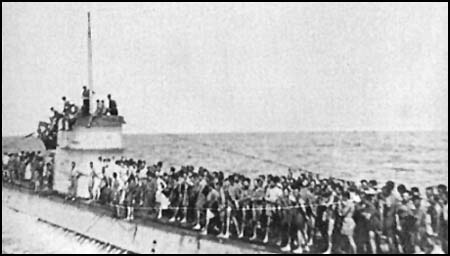 Hartenstein's U 156 loaded with Laconia survivors

In the next days U-156 saved some 400 survivors, hold 200 on board and the other 200 in lifeboats. On Sept 15, at 1130 hours U-506 under Kptlt Erich Würdemann arrived at the scene and continued to rescue the survivors. A few hours later U-507 under Korvkpt. Harro Schacht and the Italian submarine Cappellini also arrived. The boats headed for shore, towing the lifeboats behind them and hundreds of survivors were both in and inside the U-boats themselves.

On Sept 16, at 1125 hours an American B-24 Liberator bomber operating from the Ascension Island arrived at the scene where its pilot spotted the boats (which at that time flew the Red Cross flag and were clearly not hostile to anyone). The pilot radioed back to his base asking for instructions and was told to attack at once which he did at 1232 hours, forcing the U-boats to cut the lines to the life boats and submerge immediately, leaving hundreds of people again struggling in the water.

Thankfully this US intervention caused not as much loss of life as it could have as shortly afterwards some neutral French warships from Dakar arrived at the scene and started picking up survivors. Also many had been taken into the U-boats themselves and were safe there (only because the bomber failed to sink them though). Roughly 1500 survived the sinking.

This incident prompted one of the most controversial order Dönitz ever issued, usually known as the Laconia order today, it made it absolutely clear that no U-boats were to take part in any rescue operations from that date and leave any survivors in the sea. Up until that time U-boats had on very many occasions helped the survivors of their victims with supplies, water, directions to nearest land and so on.

This order was used as an excuse for the controversial conviction of Dönitz for war crimes at Nüremberg in 1946. Most sensible people agree that the German U-boats fought hard but fair considering the situation and the US submarine force fought with the same aggressiveness against japanese shipping (and if anything the US subs were more unforgiving). Thus many say that Dönitz was simply punished for being too efficient at his job and his U-boats having been to much of a threat to allied shipping and the outcome of the war. Dönitz served 11 years and 6 months in prison.