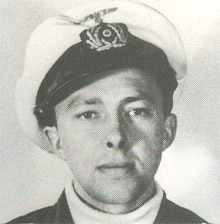 8 Dec 1939
The boat was attacked by an aircraft at 09.31 hrs, suffering severe damage. This was the third attack during this patrol. U-43 reached base at Wilhelmshaven 6 days later. (Sources: KTB)

22 Apr 1940
U-43 was bombed by two Hudson bombers in the North Sea, suffering slight damage.

28 May 1940
SW of Lands End, Cornwall: The boat missed the British steam merchant Alca with a torpedo and then opened fire with the deck gun. The steamer returned fire, but neither side scored any hits and the boat soon broke off the attack. (Sources: Ritschel)

30 Nov 1941
After sinking two British merchantmen from convoy OS 12, the boat was driven under and depth charged for several hours, but managed to escape unharmed. (Sources: Blair, vol 1, page 409)

19 Jul 1943
21.25 hrs, Bay of Biscay, outbound: U-43 and U-403 were attacked by British Liberator Mk.V BZ772 (RAF Sqdn 86/J, pilot F/L W. Roxburgh, DFC). U-403 immediately began to dive, covered by U-43, which fought off a first attack and then dived too. The aircraft suffered some damage and one of the crew was wounded, but the pilot nevertheless dropped two Fido homing torpedoes into the wash and observed a possible hit. Both boats were unharmed, and apparently misinterpreted the sounds of detonation as a crashing aircraft. The Germans claimed to have shot down the aircraft, but it in fact returned to base. (Sources: Franks/Zimmerman)

4 Feb 1941. The boat flooded through an open valve and sank while docked at Lorient, and was subsequently out of action for three months.

31 Mar 1940
U-43 lost a man overboard in the Atlantic. [I WO Oberleutnant zur See Hans-Wilhelm Behrens]

There was another U-43 in World War One
That boat was launched from its shipyard on 26 Sep 1914 and commissioned into the Imperial Navy on 30 Apr 1915. The Naval war in WWI was brought to an end with the Armistice signed on 11 Nov, 1918. Read about SM U 43 during WWI.