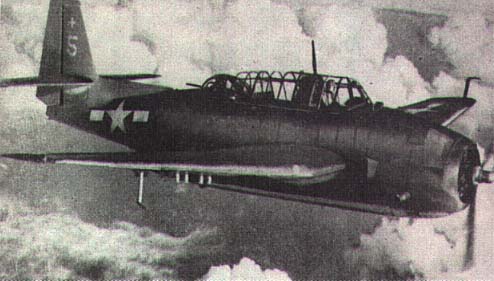 The US Navy ordered the prototype of the world's first monoplane torpedo bomber, the Douglas TBD Devastator, in 1934. First flown the following year, production delivery of this advanced aircraft started in 1937. Powered by an early 850 hp Pratt & Whitney R-1830 Twin Wasp, the TBD-1 was capable of 206 mph. However, aviation technology was changing quickly, and by 1939 the Navy recognized that improved performance was needed. On 25 March of that year the Navy asked contractors to respond to a requirement for an advanced torpedo plane. This decision was fortunate, as by 1942 the TBD would be obsolete.

The 25 March requirements included a maximum speed of 300 mph, a range of at least 1,000 miles while carrying a torpedo, a ceiling of at least 30,000 feet, a take off run in combat trim of not more than 325 feet into a 25-knot wind, and a stalling speed with a torpedo of no more than 70 mph. Additionally, it was required that the torpedo, or bombs, must be carried internally. In response, the Navy received 13 design proposals from six manufacturers. By 3 November, 1939, the Navy had focused on two of these designs; one from Vought powered by the Pratt & Whitney R-2800 Double Wasp, and one from Grumman powered by the Wright R-2600. Although the Navy announced its intention to order each design, it took six months for the contracts to be awarded. 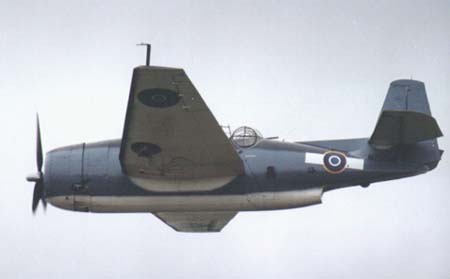 Grumman received the order for two examples of the XTBF-1 on 8 April, 1940. This was a mid-wing cantilever design with a crew of three. Externally, it looked like Grumman's F4F Wildcat, but with a bigger belly. The TBF was designed from the start with folding wings, with the folding mechanism patterned after that developed for the Martlet II and F4F-4 Wildcat. Armament consisted of one synchronized "50 caliber" (12.7mm) Browning machine gun in the upper engine cowling firing through the propeller, another 50 caliber weapon firing from a small turret at the aft end of the long canopy, and a ventral flexible 30 caliber (7.62mm) machine gun firing rearwards from a position just aft of the long weapons bay. The weapons bay was large enough to hold four 500-pound bombs, or one 22.4-inch 2,000 pound Mark 13 torpedo. Provision was made for carrying the Norden bombsight, but Avenger pilots found this to be less accurate than other aiming techniques.

The prototype flew on 7 August, 1941. Several significant problems were identified, but were quickly solved. Development of the TBF was not greatly affected when the first prototype crashed after catching fire in flight on 28 November, 1941, as the second prototype was nearly ready by that time.

Grumman assembled 1,524 examples of the TBF-1, while the Eastern Aircraft Division of General Motors built 550 of the virtually identical TBM-1. 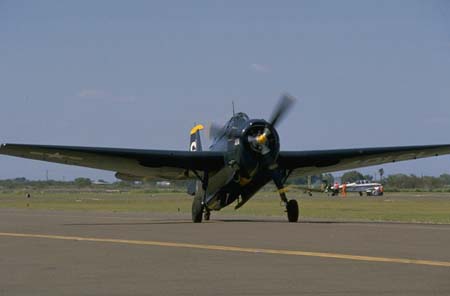 The designation TBF-1B applied to 402 aircraft built for the Royal Navy, which the British initially called Tarpon T.R. Mark I, but later called Avenger T.R. Mark I. British Avengers were sometimes modified to British specification by Blackburn Aircraft, including the installation British oxygen systems and gunsights.

The TBF-1C deleted the nose-mounted machine gun and, instead, mounted one 50 caliber weapon in each wing. This variant was plumbed to carry up to 391 gallons of additional fuel in auxiliary fuel tanks. Grumman built 764, while GM built 2,332 of their virtually identical TBM-1C.

The TBF-1D was a modification of the TBF-1 fitting the ASD or ASB radar for locating surfaced submarines or surface ships.

The first of two XTBF-3 prototypes flew on 20 June, 1943. This aircraft featured the 1,900 hp Wright R-2600-20 engine in an attempt to restore performance lost through increased operational weight in later TBF-1 variants. However, no production TBF-3 was built by Grumman. To allow Grumman's factory to focus on production of the critically important F6F Hellcat, production of Avengers was completely in the hands of the Eastern Aircraft Division of General Motors, which fabricated portions of the aircraft in several cities, and performed final assembly in Trenton, New Jersey. GM built 4,657 of this variant, called the TBM-3, between April 1944 and August 1945.

There were at least 15 variants of the TBM-3, including many modified to carry various types of surface search radar or airborne early warning radar.

In its first combat action at Midway on 4 June, 1942, the TBF faired badly. Six TBF-1 aircraft attacked the Japanese Kido Butai (Striking force) of four fleet aircraft carriers with a powerful screen. Five Avengers were shot down, and the sixth, badly damaged, barely made it back to Midway Island. This attack, like most that day, achieved nothing. However, Douglas SBD Dauntless dive bombers made successful attacks later that day, inflicting fatal damage on all four Japanese carriers.

In subsequent clashes with the Japanese Navy, the Avenger was hampered by the ineffectiveness of its primary weapon, the Mark 13 torpedo. The generally poor manufacture of this weapon was a serious problem, but was overshadowed by its many design flaws.  It was slow, and too fragile for release speeds greater than 130mph (increased later in the war).  While this slow release speed made the TBF vulnerable to antiaircraft fire, pilots were thankful that the Avenger was a tough aircraft, like all Grumman aircraft of that era. This, and poor Japanese antiaircraft gunnery, saved many American pilots. Later, the Mark 13 torpedo was improved by installing a "pickle barrel" housing around the nose of the torpedo to allow much faster drops. The warhead, initially 401 pounds of TNT, was increased to 600 pounds of the much more potent Torpex in 1943.  With the later, more effective, variants of the Mark 13, Avengers played the primary role in sinking the huge battleships Yamato and Musashi, and several Japanese aircraft carriers, cruisers, destroyers, and other warships.

Service in the Atlantic Ocean

In the Atlantic, the Avenger was the obvious choice for use aboard British and American escort carriers in screening convoys and hunting down U-boats. Avengers would sight surfaced U-boats, and swoop down on them in a glide bombing approach, releasing multiple 250-pound, 325-pound, or (most often) 500-pound depth bombs. If the U-boat put up accurate flak, the Avenger pilot might choose to circle out of range wait for other aircraft to assist. Grumman Wildcat fighters, with either four or six heavy machine guns, were often effective at subduing the U-boat's flak battery so that the Avengers could more safely make their attacks. Later the Avenger's arsenal included rockets for use on surfaced U-boats and, after mid-1943, a super-secret anti-submarine homing torpedo known as the Mark 24 Fido (also called Zombie). Various versions of the Avenger were fitted with radar for finding submarines or surface ships, with sonobuoys to track submerged submarines, and with flares and searchlights for illuminating potential targets at night. Avengers were known to carry combinations of these devices, such as two 500-pound depth bombs, one Fido, radar, flares, and sonobuoys.

American escort carrier air groups sank, or assisted in sinking, 35 submarines in the Atlantic. Most, perhaps all, of these kills must have been made by Avengers. To this total must be added the achievements of British Avengers. Additionally, Avengers flew anti-submarine patrols from land bases, and laid mines.

In all, 9,839 Avengers were assembled, including 2,293 TBFs built by Grumman and 7,546 TBMs built by Eastern Aircraft (General Motors). After the war, they faded from service more gradually than most aircraft of the era, serving useful roles into mid-1950s.

35 U-boats lost to Avenger aircraft. + means that the Avenger shared the credit for the sinking.