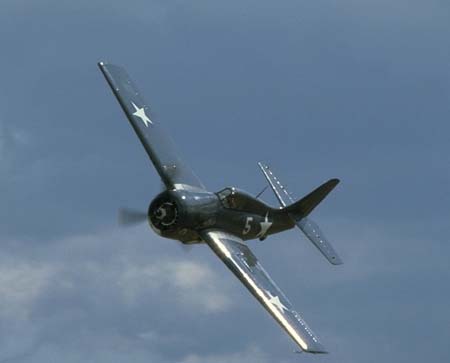 During the 1930s, Grumman produced a successful series of biplane fighters designed for operation from US Navy aircraft carriers. These included the FF, F2F, and F3F. Each featured an enclosed cockpit, radial engine, and retracting landing gear which folded against the lower sides of the fuselage just forward of the wing.

With such experience behind them, in 1935 Leroy Grumman's team set out to develop an improved biplane fighter for the Navy's forthcoming fighter competition. Called Design 16 by Grumman, it lost to Brewster's Model B-139, which eventually became the Navy's first monoplane fighter. However, the Navy ordered the XF4F-1 prototype from Grumman. Convinced that monoplanes were the way of the future, Grumman persuaded the Navy to abandon development of the XF4F-1 before it was completed (it never flew), and instead embarked on the monoplane Model 18, known to the Navy as the XF4F-2. This aircraft first flew in September, 1937, powered by a 1,050 horsepower fourteen-cylinder Pratt & Whitney R-1830-66 Twin Wasp, and proved itself capable of 288 mph at 10,000 ft. This was faster than the fighters proposed by Brewster and Seversky, and the Grumman aircraft was found to be more maneuverable as well. Still, the Navy wished to diversify its base of contractors and, because Grumman already held other development and production contracts, the Navy placed an order for 54 Brewster F2A-1s on 11 June, 1938.

Grumman then redesigned their aircraft, which became the Model 36. Only the landing gear and portions of the fuselage were retained from the earlier model, and the wings were lengthened (span increasing from 34 ft to 38 ft) and given square tips. The most important change was the use of the new Pratt & Whitney R-1830-76, with two-stage two-speed supercharger. First flown on 12 February, 1939, the XF4F-3 soon demonstrated a top speed of 335 mph at 21,300 ft. The importance of the advanced supercharger cannot be overstated, and the high-altitude performance it provided would make the Wildcat America's most effective fighter opposing Japanese naval aggression for months after the Pearl Harbor attack.

The US Navy ordered the F4F-3 into production on 8 August, 1939, with an order for 54 aircraft. The F4F-3 was capable of 328 mph at 21,000 ft. It had self-sealing fuel tanks and a plate of armor glass in front of the pilot. Early production Wildcats lacked armor behind the seat, but such armor was usually added before they saw combat. The F4F-3 also lacked folding wings. The short range was a significant handicap, limiting escort missions to a radius of about 200 miles. Many Wildcat pilots were saved by the Wildcat's ZB homing device, which allowed the pilots find their ships in poor visibility, provided they could get within the 30-mile range of the homing beacon. The four "50 caliber" (12.7mm) Browning machine guns of the F4F-3 carried 400 rounds per gun. Poor design of the installation caused these otherwise reliable guns to frequently jam (a problem common to the wing mounted weapons of many American fighters early in the war).

It was an F4F-3 flown by Lt. Edward H. "Butch" O'Hare that in a few minutes single-handedly shot down five out of nine Mitsubishi G4M "Betty" twin engine bombers attacking USS Lexington off Bougainville on 20 February, 1942. O'Hare's attacks were high side diving attacks employing accurate deflection shooting into the bombers' engines. His shooting was so accurate (even with only the four guns of an F4F-3) that some of the engines were shot completely off of the aircraft. O'Hare was given the Medal of Honor for this action. Contrasting with O'Hare's performance, his wingman was unable to participate because his guns would not function.

The French Aeronavale ordered 100 similar aircraft, known to Grumman as the G-36A. Armed with six French 7.5mm machine guns and powered by a 1,200 hp nine-cylinder Wright R-1820 Cyclone engine, it was capable of 306 mph at 15,000 ft. Its reduced performance was due to use of a single-stage supercharger and the greater frontal area of the engine, which increased drag. First flown on 10 May, 1940, none could be delivered before France surrendered on 23 June. The British Purchasing Commission assumed the order and 91 such aircraft, designated Martlet I, were provided to the Royal Navy. Before delivery in Canada, these aircraft were revised to British specification, including a change of armament to four 50 caliber machine guns. Only 81 survived shipment to Britain, as 10 were lost en route to U-boat attack.

The British Purchasing Commission also placed an original order with Grumman for 100 aircraft of British specification. Production of these had only started when the British learned that Grumman was designing a folding wing for the Wildcat. The British quickly revised their contract, so that the first 10 were delivered without folding wings (but later modified), and the remaining 90 were equipped with folding wings. For a powerplant, the British chose a Twin Wasp with a single-stage supercharger, which reduced high-altitude performance below that of the F4F-3. Six 50 caliber (12.7mm) Browning machine guns were installed in these aircraft, known as Martlet II.

A shortage of two-stage superchargers lead to development of the F4F-3A, which was basically the F4F-3 but with a 1,200 hp Pratt & Whitney R-1830-90 engine with a more primitive single-stage two-speed supercharger. The F4F-3A, which was capable of 312 mph at 16,000 ft, was used side by side with the F4F-3, but its poorer performance made it unpopular. Thirty of these aircraft, ordered by Greece, were in shipment when Greece was conquered by the Nazis, and were thus assumed by Britain as the Martlet III.

The XF4F-4 was first flown on 15 April, 1941, and the resulting F4F-4 replaced the F4F-3 in production in the Spring of 1942. This aircraft used the folding wing and six-gun armament developed for the Martlet II. However, with only 240 rounds per gun, many US Navy pilots were concerned that all ammunition could be expended in less than 20 seconds of shooting. Initially unpopular with pilots because of the extra weight and reduced performance, the F4F-4 was capable of only about 318 mph at 19,400 ft. However, its folding wing was intended to allow five F4F-4s to be stowed in the space required by two F4F-3s. In practice, the folding wing allowed an increase of about 50% in the number of fighters carried aboard American fleet carriers.

The F4F-4 was the first Wildcat plumbed for carrying droppable, auxiliary fuel tanks. Although two 58-gallon tanks could be carried, a more typical arrangement in combat conditions was a single 42-gallon unit. This small volume represented a noticeable addition to the F4F-4's 144-gallon internal capacity. Due to the extra weight of the folding wings and revised armament, the practical escort radius of the F4F-4 was only about 150 to 175 miles without the auxiliary fuel tank, and somewhat more than 200 miles with the 42-gallon unit.

The rate of climb, never spectacular in early Wildcats, was noticeably worse in the F4F-4. While Grumman optimistically claimed the F4F-4 could climb at a modest 1,950 feet per minute, in combat conditions at combat altitudes pilots found their mounts capable of ascending at only 500 to 1,000 feet per minute. This was greatly inferior to the Wildcat's principal opponent in the Pacific, the Mitsubishi A6M, commonly known as the "Zero", but officially called "Zeke" by the Allies. The Zeke could outmaneuver the Wildcat at moderate speeds, had a slight speed advantage at most altitudes, and could range at least twice as far as a Wildcat. The Wildcat was, however, the tougher aircraft, and could outdive the Zeke and could even outmaneuver the Zeke at very high speeds. Unable to dogfight on even terms, Wildcat pilots at Midway and Guadalcanal were forced to develop tactics suited to the performance limitations of the F4F-4, emphasizing weaving to protect each other's tails, diving away in emergencies, and hit and run attacks using the deflection shooting techniques that were emphasized in naval fighter pilot gunnery training.

Officially, production of the F4F-4 ended on the last day of 1942 after Grumman had delivered 1,168 of these aircraft. Production was switched to a contract with General Motors, which produced a very similar aircraft known as the FM-1 Wildcat. A significant difference between the F4F-4 and the FM-1 was that the latter carried only four 50 caliber machine guns, with a generous 430 rounds per gun. The transfer of production of the F4F and TBF to General Motors freed up Grumman's factory space so that they could concentrate on producing the vitally important F6F Hellcat. 312 FM-1s used by the Fleet Air Arm were known as Martlet V, and 748 were delivered to the US Navy.

Grumman first flew the XF4F-8 prototype on 8 November, 1942. This was specifically designed for operation from the small decks of escort carriers. It featured a Wright Cyclone engine rated at 1,350 hp. This prototype lead to the FM-2 series, built by General Motors.

The FM-2 was the last and most numerous major production variant of the Wildcat series. This variant reverted to the Wright Cyclone engine, in this case the R-1820-56 series of 1,350 hp with single-stage two-speed supercharger. Maximum speed was 332 mph at 28,800 ft. The rate of climb was greatly improved over that of all previous Wildcat versions. The FM-2 was about 450 pounds lighter than the F4F-4 empty and, with 150 additional horsepower, was well-suited to operation from the short decks of escort carriers. The FM-2 was virtually never operated from fleet carriers, as Hellcats and, later, Corsairs filled that role in the last 2 years of the war. Strengthened wing racks allowed the FM-2 to carry a 250 pound bomb under each wing. The first of 4,777 examples of the FM-2 was delivered in September, 1943, and production continued until end of the war. 370 were provided to the Fleet Air Arm, which knew them as the Wildcat VI. Several modifications were added during the production run, including water injection, zero-length rails for 5-inch rockets, and increased internal fuel capacity.

Service in the Atlantic Ocean

Best known for their contributions in the Pacific, the Wildcats and Martlets also gave reputable service in the Atlantic. This usually took the form of operating from an escort carrier attached to a convoy or a hunter-killer group. These Wildcats were responsible for intercepting German bombers and, in conjunction with other types, finding and attacking U-boats. The six-gun armaments of the F4F-4, Martlet II, and Martlet IV were particularly effective in suppressing the anti-aircraft guns of the U-boats so that larger, slower bombers could more safely attack with depth bombs or homing torpedoes. The threat of strafing by a Wildcat would often persuade a U-boat to submerge, reducing the chance of catching a convoy. Additionally, the Wildcats could summon bombers and surface escorts to engage U-boats. Known to be rugged and forgiving, the Wildcat's performance limitations were not a significant handicap in the Atlantic, where there were no enemy fighters to contend with.

At the end of the war, the Wildcat was just beginning to be replaced aboard escort carriers by the impressive Grumman F8F-1 Bearcat.

(When fighting U-boat Wildcat normally shielded her larger sister the Avenger while the latter dropped depth charges or acoustic torpedoes. Both planes were given credit in such cases.).

27 U-boats lost to Wildcat aircraft. + means that the Wildcat shared the credit for the sinking.