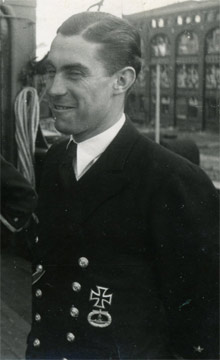 U-1059 was en route to the Far East with a cargo of torpedoes for the Monsun boats.

The sinking of U-1059At 07.26 hours, the boat was attacked by an Avenger/Wildcat team from USS Block Island operating on ULTRA reports southwest of the Cape Verde Islands. The aircraft completely suprised U-1059, as she was not underway and men were seen swimming in the water. While the Wildcat (Lt (jg) W.H. Cole) made a strafing run, the Avenger dropped three depth charges that straddled the boat perfectly. U-1059 began to sink, but the AA gunners scored hits on the Avenger during its second attack run and it crashed into the sea, killing the pilot and one the crew. The mortally wounded pilot had nevertheless dropped two depth charges that sent the boat to the bottom. Ensign M.E. Fitzgerald survived the aircraft crash and found himself on a dinghy amidst German survivors. He helped a wounded survivor but kept the others at a distance with his pistol until USS Corry arrived and rescued him and eight German survivors, including the badly-wounded commander, Oblt Günther Leupold. (Sources: Franks/Zimmerman)

Unlike many other U-boats, which during their service lost men due to accidents and various other causes, U-1059 did not suffer any casualties (we know of) until the time of her loss.