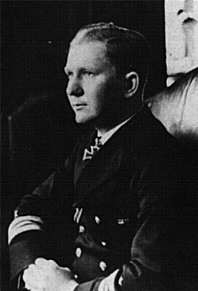 The sinking of U-487 19.21 hrs, SW of the Azores: the milch cow boat was attacked by USN carrier aircraft of VC-13 from USS Core after a refuelling meeting was reported by ULTRA. An Avenger/Wildcat team (pilots Lt R.P. Williams and Lt (jg) E.H. Steiger) completely surprised U-487 - crew were seen sun-bathing on deck and AA guns were unmanned during the first attack run. Four depth charges straddled the boat, which came to a stop in a large oil patch. The Wildcat attempted a second strafing run, but was hit by flak and crashed off the port bow, killing the pilot. Two more Wildcats (Lt Cdr C.W. Brewer and Lt J.R. Brownstein) then arrived, and their strafing attacks allowed a second Avenger (Lt (jg) J.F. Schoby) to drop four depth charges direct on target. The detonations lifted U-487 out of the water and broke her back, sinking her in a matter of seconds. 33 survivors were later rescued by USS Barker.

Unlike many other U-boats, which during their service lost men due to accidents and various other causes, U-487 did not suffer any casualties (we know of) until the time of her loss.