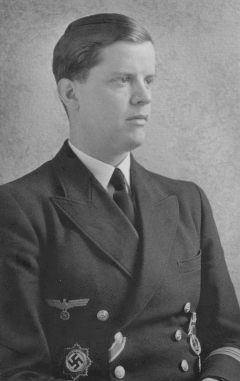 Attacks on U-158 during this patrol

30 Jun 1942
The sinking of U-158:
U-158 had captured several confidential documents during the sinking of the Everalda SSW of Bermuda on 29 June. Rostin reported information from them to the BdU and his lengthy wireless signals were picked up by Allied stations, allowing them to pinpoint the position of the U-boat by radio direction finding. In the afternoon of 30 June a PBM-3C Mariner flying boat (VP-74 USN/P-1, pilot Lt Richard E. Schreder) on anti-submarine patrol from Bermuda was redirected to the area, picked up a radar contact while flying in low cloud, and completely surprised the U-boat on the surface by diving out of the sun, dropping two depth charges that detonated directly underneath the stern and caused her to sink immediately, leaving behind a large field of wreckage and oil. All 54 U-boat crew and two prisoners taken from Everalda were lost.