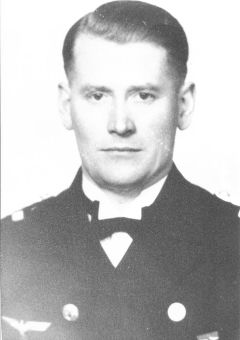 The location of this most famous of U-boats was one of the key expedition targets, and today, we believe we achieved it. To be the first to dive on Adolf Piening's U-boat was a great treat for the team and a just reward for the efforts all of us have put in, especially to keep diving during this period of marginal weather.

In stunning visibility at 73 metres the unmistakable giant shape of the Type IXC U-boat was found sitting bolt upright on the seabed. Her forward hydroplanes and torpedo tubes have fallen off to one side, revealing the bow end of her pressure hull, apart from this damage, the wreck was entirely intact. This included all of the outer cladding attached to the pressure hull, which gave this wreck the 'beamy' shape of the Type IX.

Some observations about the wreck include the schnorchel on the starboard side of the foredeck (with round dipole), the heavily reinforced support for the wintergarden still in place (like the one on U869), conning tower hatch open (allowing the divers to see clear into the control room via the opened lower hatch), aft dingy recess on the deck was empty, both external torpedo doors were shut. All of the external torpedo containers have been removed.

There was no evidence of life raft canisters having been fitted to this U-boat.

This was undoubtedly one of the most impressive dives we have done during the course of the expedition. The video footage of this wreck is some of the most mind-blowing taken so far. Extensive stills photographs were also taken.

Comments:
What of U2506? Well, we have dived every submarine wreck that has been found during admiralty surveys over the last 20 years, which lie within five miles of where she supposedly foundered. She will be here somewhere and the search continues. It is becoming apparent that the 1946 disposals have the least accurate sinking positions and that generally the Loch Ryan disposals are more accurate than the Lisahally ones, although in the long-run this may not turn out to be the case.

We may find U2506 tomorrow, when we examine a position, which like many others in these waters has no obvious identity.