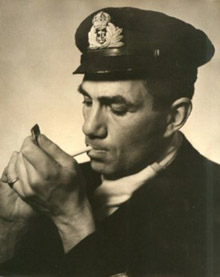 He briefly served in WWI as a naval cadet. He graduated from McGill University in Mining Engineering and worked as an engineer and then later a manufacturer’s agent until the outbreak of war. He joined the RCNVR on Sept 2, 1939.

Because of his age (38), he was made a paymaster lieutenant. However, he repeatedly requested that he be sent to sea, and so was transferred to the executive branch in June, 1940. He served as second Lieutenant onboard the corvette the HMCS Bittersweet (1940-1942).

He was discharged on medical grounds in June 1945, having contracted TB at sea, and was placed on the retired list. He died April 27, 1949, after battling the illness for almost four years.

No events found for this officer. This may be due to unknown dates of command (we pull ship events to their respective commander pages).

You can help improve officers Walter Juchereau Kingsmill's page
Click here to Submit events/comments/updates for this officer.
Please use this if you spot mistakes or want to improve his page.