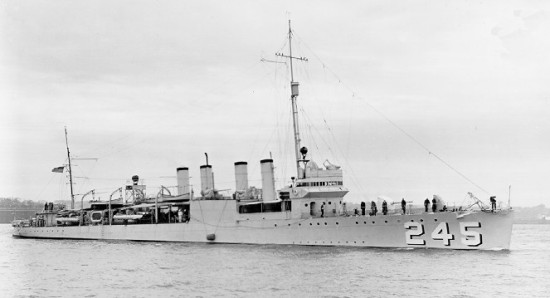 "Flush Deck" was the term used to differentiate United States destroyers mass produced during the first world war from destroyers built between the wars. In addition to those listed here, several had been converted to various auxilliaries. Another fifty had been given to England in exchange for military bases in British colonies. The Royal Navy identified their acquisitions as the TOWN class.

By 1941 United States flush deck destoyers escorted convoys through the western Atlantic "Neutrality Zone" and identical Royal Navy Town class destroyers escorted the convoy through the eastern Atlantic to England. A ship's silhouette viewed through a U-boat periscope (or against the aurora borealis of the night sky) was of little use to determine the destroyer's nationality. Under these circumstances, U-652 and USS Greer ineffectually exchanged torpedoes and depth charges on 4 September 1941, 3 months prior to declaration of war.

This group of ships formed the destroyer squadron of the United States Asiatic Fleet based at Manila. These destroyers fought a retreating action during Japanese conquest of the Philippines and the Dutch East Indies. The names of destroyers lost in the defense of Java were given to destroyer escorts launched a few months later, and may confuse historians.

Most of the flush deck destroyers on the remainder of this page were rearmed during overhaul. The aftermost of the original "four stacks" was removed, and the remaining three were shortened to generate this profile from a US Navy recognition card produced by the USN Bureau of Aeronautics: 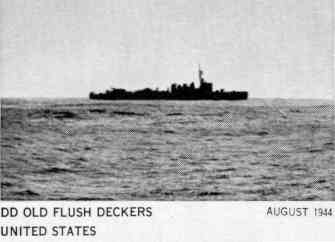