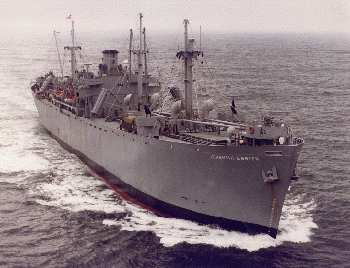 On January 3, 1941, President Roosevelt announced a $350 million shipbuilding program. In September 1941 United States launched an emergency ship construction program that would involve building, for the next 3 years, the equivalent of more than half of the pre-war merchant shipping of the world, while during the same time period building the greatest fleet of fighting ships the world had ever seen. This need for new cargo ships came at a time when most of the available facilities were already straining under the naval expansion program.

In 1940, the British Merchant Shipbuilding Mission had approached the United States with an order for 60 cargo ships with a deadweight capacity of some 633,000 tons to replace some of their losses. The cost was about $96 million, paid in cash.

The names of all these vessels were to be prefixed with the word "OCEAN". The keel for the first West Coast vessel, the Ocean Vanguard was laid April 14th 1941, and the ship was launched 156 days later, on August 16th 1941. The final delivery of the thirtieth West Coast vessel was made five months ahead of schedule, in July 1942. The keel for the first east coast vessel, the Ocean Liberty, was laid on May 24th, 1941, the 30th and last one being delivered one month ahead of schedule in November 1942.

The basic hull model for the vessels was based on the SS Dorington Court, a British steamer built in the 30's with raked stem, cruiser stern, single screw and balanced rudder. The main propulsion unit was a three cylinder, triple expansion, reciprocating steam engine whose design dated back to 1896.

Because Britain had no domestic oil at the time, it was to be powered by coal-fired scotch or Fire-tube boilers. It was 441 feet long, with a beam of 57 feet and displaced about 7,500 tons. It could carry 9,150 tons of cargo in its five holds. The cruising range would be 8,000 miles at 11 knots.

The United States Maritime Commission made a number of alterations to the Ocean class design. Some were made to conform to American manufacturing and shipbuilding standards, others to accommodate the scarcity of certain materials, and then some to meet the need to build as rapidly and as cheaply as possible. This resulted in the designation EC2-S-C1, originally referred to as 'emergency ships'.

One of the more common nicknames was Ugly Duckling inspired by their utilitarian appearance, but in 1941, after President Franklin D Roosevelt told the country that these ships would bring liberty to Europe, they became known as Liberty Ship.

The man tasked with building this fleet of utility cargo ships was a California industrialist, Henry J. Kaiser. He had completed the dams at Boulder, Bonneville and Grand Coulee ahead of schedule. He had, however, never built ships before.

By 1943 the Maritime Commission was planning the production of a number of new types of ships, including a fast type of cargo ship which eventually became known as the Victory Ship. The initial designation was EC2-S-AP1. Designed to use either the Lentz engine, turbines or diesel, its expected speed would be 15-17 knots compared to the Liberty ships at 11 knots. The hull lines were changed to accommodate the higher speeds, design features were added to prevent hull fractures and the auxiliary equipment would be electric powered instead of steam. In April 1944 the prefix was changed to VC2 and the general title Victory Ship was adopted.

SAM ships were a group of Liberty ships loaned to Britain during the war on lend lease terms, and consisted entirely of vessels of the EC2-S-Cl type. The terms were those of the Defense Aid Supplemental Appropriation Act, approved by Congress on 27 March, 1941, which provided for the transfer of merchant ships and other forms of aid to Britain under a lease lend formula.

For a time after the war the surviving lease lend vessels continued to trade under the British flag, thus playing an important role in the economy of the country at a time when the merchant fleet still had insufficient tonnage to meet all its requirements.