The Hedgehog was a projector-type weapon that throws 24 small projectiles several hundred feet ahead of the attacking vessel. Immediately after entering the water the 32-pound projectiles arm and explode on contact with the U-boat or not until they reach the bottom of the ocean. 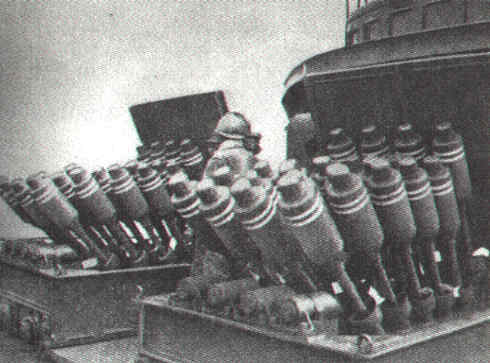 The main drawback of the depth charge was that the attacking vessel usually threw the charges blind as the ASDIC done could not detect a U-boat directly underneath. With the Hedgehog the vessel could very often maintain contact until the moment of attack.

The benefits of this type of weapon is that the position of the U-boat is more accurately known and the projectiles do not explode unless they hit something meaning that ASDIC contact is not lost due to massive underwater explosions unless the attack is successful. 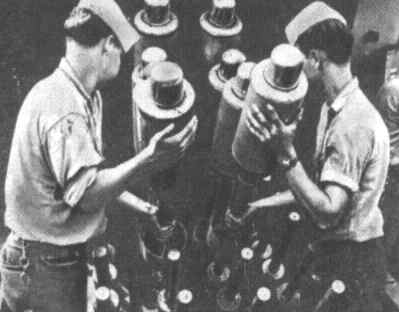 Re-loading of a Hedgehog platform

Normally the U-boat did not survive 1-2 direct hits by the Hedgehog, although there are such cases.

The Hedgehog was an effective weapon but was not as thrilling as the escort rushing in dropping depth charges onto the suspected U-boat's position.

Development of the Hedgehog

The Hedgehog was developed by Royal Navy's Directorate of Miscellaneous Weapons Development, DMWD (known as The Wheezers and Dodgers) under the leadership of Sir Charles Goodeve. The new weapon met furious resistance among certain establishment within the Royal Navy right from the start. it was only the determination of Goodeve's people that managed to push the weapon through obstacle after obstacle.

There were several problems in creating the weapon including;

The projectile sank 3-times faster than a depth charge, making evasivion much harder for the U-boat.

In May 1941 the weapon was finally installed onto the destroyer HMS Westcott and test was conducted in Liverpool Bay against a known wreck. The test was extremely successful and the weapon entered production 9 months later (Pawle, 2009).

Example of the Hedgehog against a Type IXC U-boat (a 30m circle against a 76m long boat)
In this case 4 Hedgehogs have direct contact and would destroy the boat.

Initially the successes were only about 5%, mainly due to experience of the operators and in some cases low confidence in the weapon (Pawle, 2009). With better training and advocacy among the crews the successes started coming in.

So successful have the forward throwing projectiles and acoustic torpedoes become that they are the mainstream anti-submarine weapons to this date.

Pawle, G. (2009). The Wheezer and Dodgers. The inside story of clandestine weapon development in World War II