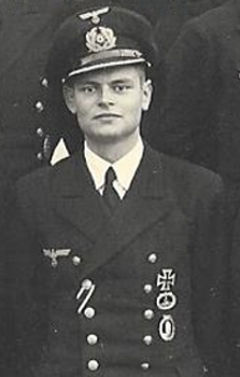 This information is based on 2 e-mails I have had on this vessel.

The U-309 is known to have been sunk in the Moray Firth after being depth-charged by a Canadian frigate HMCS St John in 1944, there is a position approximate on the chart 58.09N, 02.23W, but the exact location was unknown.

The sub is lying on her port side at an angle of about 45 degrees. The conning tower is fairly intact, the hatch appears to be open. The railings at the back are missing. There are two periscopes lying on the seabed.

The bow of the sub has been blown off and is missing. Four torpedo loading tubes are visible inside.

The stern torpedo loading hatch (aft of the conning tower) is open and the hatch door is lying beside it. There are racks visible inside.

The stern is well damaged with the outer shell shattered and holes in the pressure hull. There are two four-bladed props with bullet ends, though one of the props is quite well buried. There is a large hydroplane (rudder) behind the props

We have identified her as a type VIIC on 2 dives by the location of the schnorkel and liferaft containers. There are two areas of significant damage at the bow and the starboard hull adjacent to the electric motor room/rear torpedo room. The bow plating forward of the pressure hull is badly damaged exposing the forward torpedo tubes. How was this damage caused? As most of the debris is lying by the bow it is probable the bow was damaged as the sub hit the bottom and the natural process of corrosion has taken its toll over the years. The large split in the rear pressure hull is almost certainly what caused her loss. There is a deep depression around the split almost certainly caused by depth charges.

The open hatch referred to as the rear torpedo loading hatch lies just aft of the conning tower in the area of the diesel motor room so certainly not for torpedo loading. The conning tower lies in fairly good condition with the debris of its outer covering lying below it on the seabed. The two periscopes are still on the sub although both retracted. The DF aerial is clearly visible.

There was no identifying feature to confirm that this is U309, but she fits the description of that class of sub and is reasonably close to the charted position given by the hydrographic office. The damage to the sub is consistent with that caused by depth charges, so we assume she is the U309."