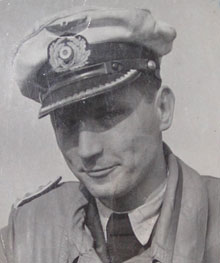 On May 21, 1917, a few miles north of Ushant, the French steamer Moliere sighted a submerged U-boat just ahead of it maneuvering to fire a torpedo against a different ship in its convoy. The Moliere proceeded to ram the U-boat, suffering damage in the process that forced her to return to port for repairs. Modern sources list the U-boat sunk as being the UB 36 under Oblt.z.S. Harald von Keyserlingk. A careful examination of historical documents, however, suggests this attribution is incorrect and the U-boat sunk was, in fact, Kplt. Gustav Buch’s UC 36.

Flanders-based boats into the Channel

From the spring of 1915 on, the Kaiserliche Marine based submarines in occupied Belgium (U-boats had made some use of these ports as early as November 1914). For the next year or so, Flanders-based U-boats were mainly an annoyance to the Royal Navy. Though they sank a quantity of ships, the offensive potential and range of these original Flanders-based boats, UCIs and UBIs, was quite limited.

Things would change though in 1916, with the introduction of more powerful U-boats to the U-Flottille Flandern: UBII torpedo-attack boats and UCII minelayers, which actually had even better torpedo attack capability than the UBIIs. These classes had the capacity to conduct two week or longer patrols from Flanders through the Straits of Dover into the English Channel, Bristol Channel, and Bay of Biscay. From August 1917, a pure torpedo-attack adaptation of the UCII, the UBIII, also operated out of the Flanders ports.

Flanders-based U-boats were both exceptionally successful and suffered exceptionally heavy losses in the process. Determining the fate of many Flanders-based U-boats though has proven to be a challenge for the past 90 years. In the case of two boats that disappeared in May 1917, wartime Royal Navy sinking attributions, as published in the 1919 edition of Jane’s Fighting Ships, offered no satisfying answers. The loss of UC 36 was tied by the Royal Navy to an aircraft attack in the North Sea 20 miles ENE of the Noord Hinder Light Vessel in the southern North Sea on May 20 — a date and location that made no sense, given that UC 36 was assigned to operate in the English Channel. UB 36 was simply listed as missing in June 1917. More recent assessments for these two boats by Admiral Arno Spindler in the German official history and others are:

UB 36: sailed on the evening of May 9, 1917. Credited with sinking three ships on May 20 (the British sailing vessels Dana and Mientje and the Brazilian steamer Tijuca), and one more on May 21 (Ferdinand A) before being rammed and sunk by the French steamer Moliere while attacking a convoy north of Ushant.

UC 36: sailed 8:20pm (German time) May 16, 1917, missing after laying mines near the Nab LV, also assigned to lay mines near the Needles and then operate against (shell) the Channel Islands and operate in the western English Channel. The inference from this is that UC 36 may have been lost near the Isle of Wight, possible while minelaying.

UC 36’s mines near the Nab accounted for three vessels on May 18, the steamers Camberwell and Elford and the Royal Navy trawler Lucknow. The mines accounted for a fourth ship, the steamer Corbet Woodall, on May 30.

Though superficially plausible, a closer analysis reveals that UC 36 must have been the boat rammed and that UB 36 should be classified as missing, and was likely lost soon after sailing. The sheets with operating orders issued to Flanders-based U-boats generally survive, including those for UB 36 and UC 36’s final patrols.

UB 36's orders state in part: “Ruckkehr nach Maßgabe der Leistungsfähigkeit und das Munitionsverbrauchs, spätestens nach 8 Tagen” — “Return in accordance with condition of efficiency and ammunition consumption, at the latest after 8 days.”(Emphasis added.) UB 36's assigned patrol area was E. III and F. III (Western entrance, English Channel, both English and French sides). Significantly, no sinkings are attributed by Spindler to UB 36 until the 11th and 12th days after she sailed and after she should have been, per orders, back home or, at minimum, on her way back home. There also aren’t any unexplained cases of ships sunk or damaged anywhere near UB 36’s patrol area at this time. May 1917 was near the absolute peak of U-boat sinkings in either war. Simply put, U-boats sank ships. For Flanders-based boats operating in the English Channel, the figures are:

The lack of sinkings attributable to UB 36 during her assigned time on station suggests that she was lost before she had on station for very long. It is possible, but not certain, that an unidentified UBII wreck found by divers off the Belgian coast is UB 36 but other possibilities for the wreck’s identity exist.

Per her order sheet, UC 36’s patrol area was F. III — western entrance of the Channel, French side. Patrol length up to 14 days, minelaying as given above. There's also a reference to a special operation, details not included. Per Spindler, this was against the Channel Islands. Additional details are available in the KTB of UC 70, which was also issued instructions in the same set of orders as UC 36. UC 70 rendezvoused with UB 31 and UB 40 at 3:40am on May 18. The planned operation to shell the Channel Islands was cancelled as too few boats had met up. Given when UC 36 sailed her failure to make the rendezvous is not surprising. In the official statement given by their masters, the Dana and Mientje were sunk are at about 0630 or slightly earlier on the 20th... 25 miles north or so of Hanois, in the Channel Islands. (The two sailing vessels sailed on the 19th — the statement found in certain sources that they sailed on the 20th is incorrect.)

Tijuca was sunk at 2240 on the 20th 5 miles SW of Pierres Noires. Her captain described the U-boat involved as being like U 46, however an examination of the KTBs of U-series boats at sea shows none near this area. Ferdinand A is torpedoed out of a convoy and sunk at 0615 on the 21st, 15 miles north of Ushant. The submarine then conducts a second attack against the same convoy. At 0655, the steamer Moliere sights the periscope of submarine just ahead, with the U-boat attempting to cross in front of the bows of the steamer. The Moliere alters course and rams the U-boat. A shock was felt and torpedo was observed heading toward a steamer in the convoy (it missed). Soon thereafter a rush of bubbles were observed. Moliere was forced to return to Brest for repairs, where a large whole was found, along with several dents.

The Royal Navy ’s liaison officer report notes: “The false maneuvre of the submarine may be explained as follows: She seems to have endeauvoured to get between the 2 columns of the convoy & use her after torpedo tube to torpedo one of the vessels in the line when she was surprised by the ‘MOLIERE’ who was out of line. In manoeuvering to ram her MOLIERE did the rest.” UCII-class submarines, such as UC 36, had a stern tube. The UBII-class, of which UB 36 was an example, did not. There are no unexplained cases of ships sunk or damaged in UC 36’s patrol area after Moliere rammed the submarine. The statement also contain a remark by an intelligence officer that reveals why the action was initially classified by the Royal Navy as an “improbable” sinking of a submarine, and thus not included in wartime U-boat loss attributions. Based upon the information available as of June 9, 1917, Royal Navy thought the submarine involved to not have been seriously damaged and to have proceeded to on to operate off the French west coat. In pencil, it even identifies the submarine thought to have been rammed by Moliere: UC 21. UC 21 did indeed operate along the French Atlantic coast in late May 1917. UC 21’s KTB, however, makes no mention of this incident — or sinking Dana, Mientje, Tijuca and Ferdinand A.

Thanks to Oliver Lörscher for assistance in obtaining files from The National Archives at Kew.