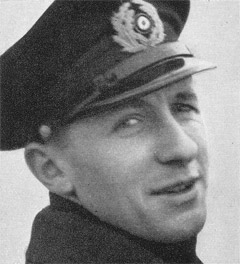 26 Feb 1943
On the fifth day outbound from France through the Bay of Biscay the boat was attacked by a British B-24 Liberator bomber (RAF Sqdn 224, pilot Peter J. Cundy) and seriously damaged. Left unable to dive, KL Staats ran west to get out of Allied range and asked for help. U-508 made port on 15 March 1943. (Sources: Blair, vol 2, page 200)

At 01.16 hrs the last message from the aircraft reported they were attacking a U-boat 95 miles (153 km) north of Cape Penas, Spain. A search later found two oil slicks in the area, one larger than the other, about five miles (8.5 km) apart. The aircraft's attack on the outbound U-508 apparently resulted in their mutual destruction, leaving no survivors. Losses were 57 from the U-boat, ten from the plane. (Sources: Franks/Zimmerman)

Unlike many other U-boats, which during their service lost men due to accidents and various other causes, U-508 did not suffer any casualties (we know of) until the time of her loss.