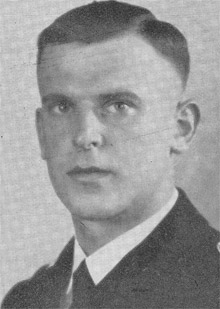 U-556 and battleship Bismarck
U-556 and the famous battleship Bismarck shared a special connection. Both were built by Blohm & Voss in Hamburg and during the summer of 1940 they often shared berth there. When the time came for U-556 to be commissioned in late Jan 1941 Kptlt. Wohlfarth felt he must have a band to celebrate but U-boats did not have such novelties. He then contacted his friend Kpt. Ernst Lindemann on the Bismarck and borrowed his band for the occation. In return Wohlfarth drew up a document promising to have U-556 protect his larger sister (Bismarck) and on this paper the U-boat is seen stopping aircraft and torpedoes going for the Bismarck and U-556 is then seen towing the Bismarck to safety. How Bismarck could have used such help in May 1941.

It was then on May 27, 1941 that U-556 got the order to run for Bismarck, then sinking, and collect its war diary. On the way to the site the U-boat saw aircraft carrier Ark Royal and the battlecruiser Renown pass directly in front of the U-boat but unfortunately she had expended all ther torpedoes and was unable to help her bigger sister. The boat actually saw Ark Royal launch the aircraft that doomed the Bismarck.

Unlike many other U-boats, which during their service lost men due to accidents and various other causes, U-556 did not suffer any casualties (we know of) until the time of her loss.