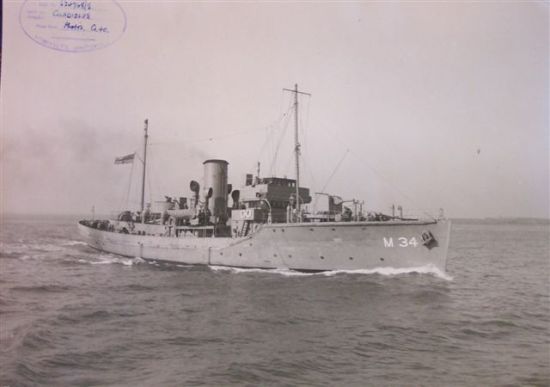 HMS Gladiolus shortly after being commissioned

1 Jul 1940
German U-boat U-26 was scuttled south-west of Ireland, in position 48°03'N, 11°30'W after being heavily damaged by depth charges from the British corvette HMS Gladiolus (Lt.Cdr. H.M.C. Sanders, RNR) and bombs from an Australian Sunderland aircraft (10 Sqn RAAF/H).

This convoy departed Bermuda on 21 January 1941 for the U.K. It was to proceed direct from Bermuda to the U.K. unlike all the other BHX convoys which merged with HX convoys. The convoy arrived in U.K. waters on 9 February 1941.

On departure from Bermuda the convoy was escorted by the armed merchant cruiser HMS Alaunia (Capt.(Retd.) H.J. Woodward, DSO and Bar, RN).

At 1240Q/24, the merchant vessel Oakworth was ordered to proceed to Halifax as she had developed a serious leak in no.1 hold.

The merchant vessel Treworlas arrived at St. Johns, Newfoundland on 30 January 1941 with weather damage. She had most likely detached from the convoy on 27 or 28 January 1941 after the convoy had encountered heavy weather near Greenland.

At 1900N/3, the tanker Athelempress was detached to Reykjavik, Iceland where she arrived on 5 February.

At 0815N/4, HMS Alaunia parted company with the convoy.

3 Mar 1941
At 0045 hours (zone +1), HMS Taku (Lt. J.F.B. Brown, RN), is joined by the British sloop HMS Enchantress (Lt.Cdr. A.E.T. Christie, RN). At 1130 hours the British corvette HMS Gladiolus (Lt.Cdr. H.M.C. Sanders, DSC, RNR) and the British rescue tug HMRT Salvonia also joined. Attempts were now undertaken to take Taku in tow but these failed. A connection between Salvonia and Taku was established only at 0808 hours the following morning. Taku was now towed to Londonderry. During passage the tow parted once. (2)

In the morning of March 25, HMS Mauritius is ordered to proceed to position 07°24'N, 24°35'W and investigate a raider report.

At 1359/25, the battlecruiser HMS Repulse (Capt. W.G. Tennant, CB, MVO, RN) was ordered to complete with fuel and then depart Freetown to overtake the convoy to join the escort. HMS Repulse arrived near the convoy around 1700/27 and then started to provide 'distant' cover.

At 1941/25, the aircraft carrier HMS Furious (Capt. A.G. Talbot, DSO, RN and the destroyers HMS Duncan (Lt.Cdr. A.N. Rowell, RN) and HMS Foxhound (Cdr. G.H. Peters, DSC, RN) were ordered to leave Freetown at 0700/26 and to overtake and join the convoy as well. This order was cancelled at 0301/26 but at 1121/26 the ships were ordered to sail as soon as possible to overtake the convoy wich they did around 2300/27 after which the destroyers returned to Freetown.

On 26 March 1941 the convoy was joined by the armed merchant cruiser HMS Bulolo (Capt.(Retd.) R.L. Hamer, RN). She remained with the convoy until March, 29th as did the corvettes HMS Clematis and HMS Cyclamen.

On 29 March, HMS Repulse, HMS Furious, HMS Duncan, HMS Foxhound parted company with the convoy escorting the troopship Narkunda to Gibraltar where they arrived on 3 April.

HMS Mauritius had been ordered to rejoin the convoy when Repulse would leave it. She remained with the convoy until 5 April 1941 when she was relieved by the light cruiser HMS Edinburgh (Capt. C.M. Blackman, DSO, RN, flying the flag of Vice-Admiral L.E. Holland, CB, RN).

HMS Revenge parted company with the convoy around 2245ON(+1.5)/23 to return to Halifax.

Around 0930Z/27, HMS California parted company with the convoy to proceed to Iceland escorted by HMS Malcolm.

Also on 28 April 1941, German submarines attacked the convoy. The tanker Capulet was torpedoed and damaged by U-552. Later on the 28th, the tankers Caledonia, Oilfield and transport Port Hardy were torpedoed and sunk by U-96.

On 2 May 1941, the drifting wreck of the abandoned Capulet was finshed off by the German submarine U-201.

The convoy arrived in British waters on 3 May 1941.