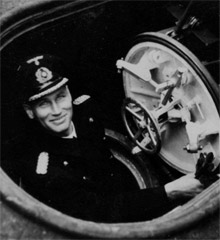 On these pages we'll collect interesting U-boat related Myths & Stories. Please submit more stories if you have them. This section will grow as time goes by.

U-505 captured on the Great Lakes?

This is about the funnies myth I've seen so far but many, many people swear it's true. It claims that the commander decided on his own to "slip in there" and sink some tonnage. Such passage was of course impossible.

U-505 was captured west of Africa in 1944 and then brought to the United states where she ended up in Chicago in 1954 as museum ship.

U-boat sunk by a toilet?

In great many sources it is stated that U-120 was sunk by "a toilet" supposedly the only U-boat to suffer that ungraceful fate.

This story is not as false as might be believed and it relates to the U-1206 and her loss on 14 April 1945. A series of events related to her very complex deep-water toilet led to her emergency surfacing just miles off the British coastline where she was immediately bombed by aircraft.

There is a persistent rumor that one or more (usually more) U-boats used Ireland as a refuel base in the war. Ireland was neutral for the duration of the war, but tilting somewhat to the Allied side.

There is no evidence of this to have taken place, in fact most data counters this. After so many years a crew member from one of those boats would have spoken up if true.

Another neutral nation did allow U-boats refuel in at least the port of Vigo, Spain. This was all done very clandestine at night from interned German merchant vessels there.

On 17 Sep 2011 Mr. Robert Fisk wrote an article called German U-boats refuelled in Ireland? Surely not in the Independent On Sunday that deals with this recurring myth.

The story often surfaces that this or that U-boat had mercury ballast (as much as 200 tons). The upshot would be that using Mercury would enable the engineers to stabilize the boat in an instant.

The story often surfaces that this or that U-boat had mercury ballast (as much as 200 tons). The upshot would be that using Mercury would enable the engineers to stabilize the boat in an instant.

First the maximum amount of mercury ever carried by a U-boat was about 100 tons on U-861.

Lead was normally used for U-boat ballast. Mercury was only stored in the keel as cargo in place of the normal ballast. However, at least nine U-boats did in fact carry mercury in place of at least part of its ballast, the U-234 that surrendered to the US in May, 1945 with approximately 24 tons of mercury worth roughly $70,000 to $80,000 at the time being one of them. Another was the U-859 that had approximately 77 tons of mercury on board when it was sunk in 1944 near Penang. The mercury was for Japan and was salvaged in the sixties. U-864 recently discovered off Norway is also loaded with approximately 70 tons of mercury and is of great concern to the Norwegian authorities who are working on raising or sealing the boat. U-234 was actually a replacement for U-864 after she was sunk.

Going ashore in the US buying groceries

There is one myth that constantly floats around claiming that U-boat was located of the shore of the US and inside it discovered packaging of US-made bread and so on. Thus it claimed the U-boat men on that boat (and perhaps other boats as well) went ashore shopping.

We've found no information to support this claim and it's extremely doubtful to say the least. Men from U-boats did indeed land in North America but those were espionage/saboteur (USA - all captured) or weather patrol missions (Canada).

Adolf Hitler and Martin Bormannn both died in Berlin at the end of the war. Both have been verified beyond doubt, the latter with very recent DNA testing. Thus neither of them escaped via U-boats to South America.

The book "Aftermath: Martin Bormann and the Fourth Reich" by Ladislas Farago (1974) describes how Martin Bormann arrived to Argentina on the steamer Giovani carrying a Vatican passport in the name of Reverend Juan Gomez. He was apparently welcomed at the pier by by Ludwig Freude and General Juan Batista Sosa Molina, the Minister of War, representing President Peron.

There is a site that has a claimed Martin Bormann story. You can download it as a PDF document from this page.

Wolfgang Eisenmenger, a forensic science professor at Munich University, conducted the DNA testing of Bormann's remains. He seems to have done the work for the Frankfurt justice officials. He also had Bormann's dental, medical, and fingerprint records. Bormann's children (or a distant family member, details a bit fuzzy) provided the blood for the DNA match which was proven conclusive, i.e. that the body was of Martin Bormann. The cause of death was deemed to be self inflicted poisoning.

This is cute myth has been attributed to the crew of U-862 (Kptlt. Heinrich Timm) which was the only German U-boat to operate in the Pacific for a short time. According to the book U-boat Far from Home the commander, Timm, jokingly made the cow-milking reference to Air Vice Marshal Sir Rochford Hughes in the late 50s and presumably that's the origin of this interesting story.

This story is not true.

There is a story floating around that this said U-boat commander worked on some highly classified US National Secrets after the war. I believe he is reported to have been a commander of a VIIC or IXC U-boat in the Atlantic during the war.

The simple answer to this one is that there was no U-boat commander in WWII with that name. Only 2 commanders with that last name in the war; Herbert Schneider died while in command of U-522 and Manfred Schneider only commander the small XXIII boat U-4706 for the last 3 months of the war, never on patrol. This story is just that, a story.

There is a persistent rumor that the U-boats penetrated the Antarctica before or during the war.

One of those stories even has a German U-boat stopping an Icelandic whaler named Juliana there in 1947 and insisting that its captain, Hekla, sells the U-boat crew supplies. In exchange for the supplies (which had been paid for in cash or gold) the U-boat commander told the whaler where a large school of whales were to be found. The whaler then found said whales in that exact position claimed by the U-boat commander.

No U-boats ever penetrated the Antarctica as far as we can see, after all why on earth would they?

To address that 1947 story. To this day there has never been any Icelandic whaler in the South Atlantic, let alone in the Antarctica. No Icelandic ship has ever been named Juliana and Hekla is an active volcano in Iceland, not a last name. 99% of all Icelandic last names for males are like mine, ending in -son.
- I am Icelandic, trust me on this one! :)

According to an article from 1996 U-133's last mission was to travel up the Colorado River from Baja, California and destroy the Hoover Dam. The article is from the USS Shaw's newsletter. The article states that U-133, piloted by Captain Peter Pfau along with 54 sailors made it to as far as Laughlin, Nevada before sandbars made them abort their mission and scuttle the sub.

This is only a cute story, U-133 would never have made it that far (see map showing its approximate path from St. Nazaire, a suitable base, to the target) as its fuel supply would never have allowed this (not even close, the type VIIC could make it to the US east coast by filling up part of its water tanks with fuel but even then it was stretching it). There was also no U-boat commander named Pfau.

Had such an unusual and daring raid been attempted during the war, people would talk and we would know about it by now.

Follow up: A reader pointed out that "... would also have been impossible for the fact that they would have had to somehow bypass the Parker and Imperial Dams (both of which opened in 1938), would have to traverse the entire length of the Colorado River without being detected (I assume that they would have to be surfaced for the duration of the journey to aid in navigation), and would arrive in the Gulf of California only to discover that the Colorado River is not as traversable as one might think."

Not seeing a good story listed here?
If you know of any good U-boat myths or bizarre stories then I'd love to hear about them for possible entry here. Please provide as much info as possible.