Light cruiser of the Carlisle class 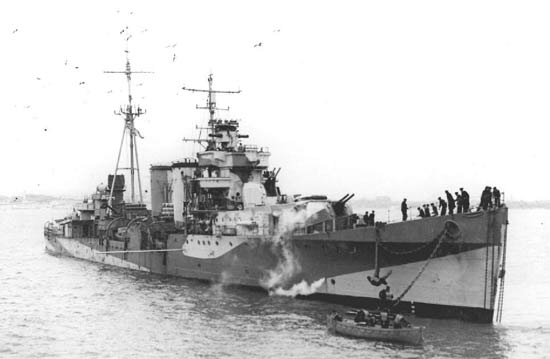 Just after 1500 hours on 23 November the British armed merchant cruiser HMS Rawalpindi (Capt.(Retd.) E.C. Kennedy, RN) sighted the Scharnhorst. Rawalpindi was part of the British Northern Patrol and was stationed south-east of Iceland in the Iceland-Faroe gap. Captain Kennedy at first tried to outrun the German ship, to report to the Admiralty that he sighted the German pocket battleship Deutschland, still believed to be operating in the North Atlantic, and to buy time so that other ships of the Northern patrol could come to his assistance. Just after 1600 hours, Rawalpindi came within range of the Scharnhorst and was quickly reduced to a flaming wreck. During this engagement Scharnhorst was hit by a 6in shell from Rawalpindi causing only light damage. Scharnhorst and Gneisenau together picked up 27 survivors from the Rawalpindi which finally sank around 2000 hours.

Nothing happened and the convoy arrived safely in the Clyde on 17 December 1939. (1)

The Ormonde was not ready to depart on the 19th and she departed one day later with orders to overtake the convoy. Until she made rendez-vous with the convoy she was escorted by the armed merchant cruiser HMS Antenor (Capt.(Retd.) D.I. McGillewie, RN).

Light cruiser HMNZS Leander (Capt. H.E. Horan, RN) had also been with the convoy (briefly) but parted company on 26 September 1940.

On 27 September the southbound convoy SW 1 was sighted and the destroyers HMS Kandahar, HMS Kimberley and sloop HMS Flamingo joined that convoy as escorts. The convoy then continued northwards escorted by HMS Ajax and HMS Coventry.

23 Dec 1941
In the morning, the US troop transport Mount Vernon (24289 GRT, built 1932) was detached to meet with the Britsh light cruiser HMS Colombo (Capt. C.C.A. Allen, RN) and then to proceed to Aden. The cruiser however failed to show up on the rendez-vous and the Mount Vernon then proceeded to Mombasa.

[Part from Durban to their final destinations.]

This convoy departed Durban on 24 December 1941 and was split into three sections near Mombasa on 2 January 1942.

The convoy was escorted by the battleship HMS Royal Sovereign (Capt. R.H. Portal, DSC, RN) until it was split up on 30 / 31 December 1941 into convoy's WS 12ZA, WS 12ZB and DM 1. HMS Royal Sovereign then proceeded to Port Victoria, Seychelles where she arrived on 2 January 1942.

Convoy WS 12ZA was formed on 31 December 1941 and was made up of troopships / transports; Aronda, Eastern Prince, Nieuw Amsterdam and Orduna. They were escorted by the light cruiser HMS Colombo (Capt. C.C.A. Allen, RN) which had brought out the US troop transport USS Oziraba (6937 GRT, built 1918) from Mombasa.

Convoy WS 12ZB was formed on 31 December 1941 and was made up of troopships / transports; Adrastus, Capetown Castle, Deucalion, Duchess of Bedford, Empire Star, Empress of Asia, Empress of Japan, Indrapoera and USS Oziraba. They were escorted by the heavy cruiser HMS Cornwall (Capt. P.C.W. Manwaring, RN).

Convoy DM 1 split off from convoy WS 12Z on 30 January 1942 and was made up of troopships / transports; Abbekerk, Aorangi, USS Mount Vernon, Narkunda and Sussex. They were escorted by the light cruiser HMS Emerald (Capt. F.C. Flynn, RN) which had brought out the US troop transport Mount Vernon (24289 GRT, built 1932) from Mombasa.

Convoy DM 1 arrived at Addu Atoll (Port T) on 4 January 1942. It departed from there, with a strengthened escort, for Singapore on 5 January 1942.