Frigate of the River class 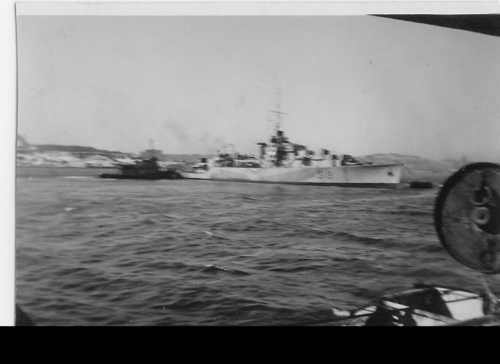 The battleship HMS Nelson (Capt. C. Caslon, CBE, RN) was also taking passage to the U.K. in this convoy having completed her refit in the U.S.A.

Around 0915Q/19, the Boston Section of four ships joined. [We have been unable to find out which ships sailed from Boston, the four ships in question are therefore included in the New York Section.]

At 0818Q/20, the Marine Devil parted company with the convoy with engine trouble. She returned to the U.S.A. escorted by USS Rhinehart. They arrived off New York on 23 January. USS Rhinehart then proceeded to the U.K. independently arriving at Liverpool on 31 January 1945.

Around 1015N/25, the convoy was divided into two sections in approximate position 47°00'N, 26°00'W. This was earlier then scheduled due to reported enemy submarine activity in U.K. waters.

HMS Nelson was also with this section.

The straggling Fisher's Hill and her escort, USS Thornhill was to overtake the English Channel Section.

Around 1315A/28, HMS Nelson was detached to proceed to Portsmouth escorted by HMS Spragge.

Around 1340A/28, the Southend Section was detached. These were the , , and . They were escorted by USS Garfield Thomas and USS Earl K. Olsen.

Around 0915A/28, the Clyde Section was detached escorted by USS Cates.

Around 1445A/28, the Bristol Channel Section was detached escorted by USS Wingfield and USS Gandy.

Around 1620A/28, HMS Duckworth and USS Rowley parted company.

Around 2000A/28, the remaining ships arrived off the Bar Light Vessel near Liverpool.