Destroyer of the Benson / Gleaves class 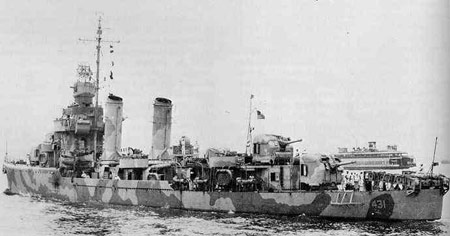 HMS Inglefield, HMS Echo, HMS Ithuriel, HMS Partridge, USS Lang and USS Madison arrived at Gibraltar around 1500/18. After fuelling they departed to conduct an A/S patrol to the east of Gibraltar and then rejoin ' Force W '.

Around 0700/19 the original screen rejoined from Gibraltar as did the cruisers HMS Cairo (A/Capt. C.C. Hardy, DSO, RN) and HMS Charybdis (Capt. L.D. Mackintosh, DSC, RN) also coming from Gibraltar. The cruisers had departed from Gibraltar at 0145/19 and joined with the destroyers that were on A/S patrol at 0230/19. HMS Antelope, HMS Westcott, HMS Wishart and HMS Wrestler were detached around 0630/19 to return to Gibraltar where they arrived at 1100/19. HMS Vidette for now remained with ' Force W '. She left the formation at 1900/19 and proceeded to Gibraltar independently.

At 0500/20, in position 37°30'N, 03°20'E, USS Wasp commenced flying off 11 F4F Wildcat fighters to provide a combat air patrol whilst the Spitfires were launched. At 0545/20 the flying off of 47 Spitfires commenced. All were successfully launched and the combat air patrol landed on around 0715/20 when ' Force W ' reversed course and steered for Gibraltar.

At 0250/21, HMS Cairo, HMS Inglefield, HMS Echo, USS Lang and USS Madison arrived at Gibraltar. After fuelling they departed again at 0625/21 to rejoin the USS Wasp at sea.