Submarine of the K XIV class 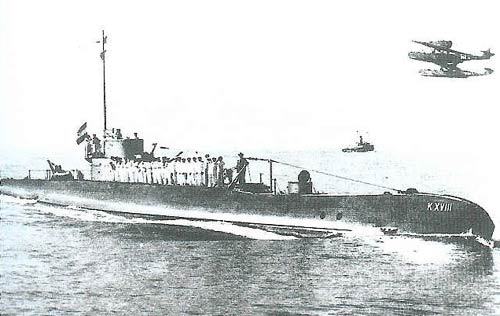 The page for this submarine was last updated in December 2013.

21 Jan 1942
HrMs K XVIII (Lt.Cdr. C.A.J. van Well Groeneveld, RNN) sank the Balikpapan light vessel with gunfire so that it could not act as a beacon to the expected Japanese landing force.

The Japanese light cruiser Naka (offsite link) was missed during this attack.

K XVIII then retired from the scene.

24 Jan 1942
In the early moring HrMs K XVIII (Lt.Cdr. C.A.J. van Well Groeneveld, RNN) closed the Japanese landing force again. She fired a torpedo at what was thought to be a cruiser of minelayer but in fact was the Japanese the Japanese submarine chaser Ch-12 (offsite link). The torpedo ran under the submarine chaser that then started a counter attack with depth charges which caused major damage to K XVIII.

K XVIII was bottomed and repairs were carried out. She surfaced during the evening and managed to sneak out of the area and set course to Surabaya. The electric motors were both damaged and could not be used. K XVIII was able to dive but could not be propelled under water.