Submarine of the Gato class 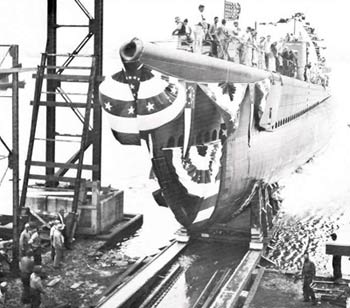 10 Jan 1944
USS Angler (Lt.Cdr. R.I. Olsen) departed from Pearl Harbor for her 1st war patrol. She was ordered to patrol in the Mariana Islands area.

29 Jan 1944
At about 0200 hrs, USS Angler (Lt.Cdr. R.I. Olsen) attacked a Japanese convoy between Japan and the Mariana islands, claiming the sinking of an 8500-ton oiler and damage to a 5000-ton oiler as well as to a 4000-ton freighter in position 27°03'N, 142°27'E. While original post-war assessments credited Angler with sinking the auxiliary net tender Shuko Maru (889 GRT), it is now known that Shuko maru was in Wakasa Bay on 23 July 1945 and could thus not have been sunk here. No confirmation of any hits has been found in Japanese records for this attack.

15 Feb 1944
USS Angler (Lt.Cdr. R.I. Olsen) departed from Midway for her 2nd war patrol. She was ordered to patrol in the South China and Sulu Sea.

3 May 1944
USS Angler (Lt.Cdr. R.I. Olsen) departed from Fremantle for her 3rd war patrol. She was ordered to patrol in the Java and South China Sea.

Carrier raid against Surabaya by the Eastern Fleet.

On 10 May 1944, the Dutch light cruiser Tromp and the destroyers were fuelled at sea by the capital ships and the cruisers. During fuelling from HMS Valiant the Dutch destroyer HrMs Van Galen sustained some minor damage (fractured hull plate on her port side) but the crew of the Van Galen was able to effect emergency repairs.

On 15 May 1944, task forces 65 and 66 were fuelled at Exmouth Gulf, Australia by Task Force 67 which was made up of of six Royal Fleet Auxiliary tankers; Eaglesdale (8032 GRT, built 1942), Echodale (8150 GRT, built 1941), Easedale (8032 GRT, built 1942), Arndale (8296 GRT, built 1937), Pearleaf (5911 GRT, built 1917), Appleleaf (5891 GRT, built 1917) and supplyship (used as distilling ship) Bacchus (3154 GRT, built 1936). This force had already left Trincomalee on 30 April and was escorted by the heavy cruisers HMS London (Capt. R.V. Symonds-Tayler, DSC, RN), HMS Suffolk (A/Capt. W.F.H.C. Rutherford, RN). They had also been escorted near Ceylon by a local escort for A/S purposes, this local escort had been made up of the destroyers HMS Rotherham, HrMs Van Galen and the frigate HMS Findhorn (Lt.Cdr. J.C. Dawson, RD, RNR). The local escort returned to Ceylon on 5 May 1944. The two cruisers mentioned above now joined Task Force 66. Later this day Task Forces 65 and 66 went to sea again for the actual attack on Surabaya. On leaving Exmouth Gulf the fleet was spotted by the merchant vessel Aroona. This ship was now instructed to put into Exmouth Gulf and was held there by HMAS Adelaide (A/Capt. J.C.D. Esdale, OBE, RAN) for 24 hours and to impress on the master and crew of this vessel the necessity of not disclosing any information concerning the Fleet on the arrival of their ship at Fremantle (their next port of call).

In the early morning hours of the 17th the carriers launched 45 dive bombers and 40 fighters for an attack on the harbour and oil installations (Wonokromo oil refeniry) of Surabaya, Netherlands East Indies. (USS Saratoga: 12 Avengers (1 had to return with engine trouble shortly after being launched), 18 Dauntless, 24 Hellcats; HMS Illustrious: 18 Avengers (2 of which force landed in the sea shortly after being launched), 16 Corsairs). On the ground they destroyed 12 enemy aircraft (20 were claimed). The damage to the harbour and shipping were over estimated (10 ships were thought to have been hit) as in fact only the small transport ship Shinrei Maru (987 GRT, built 1918) was sunk and patrol vessel P 36, auxiliary submarine chasers CHa-107 and CHa-108, tanker Yosei Maru (2594 GRT, built 1928, former Dutch Josefina) and cargo ships Choka Maru (???? GRT, built ????) and Tencho Maru (2716 GRT, built 1919) were damaged.

On the 18th the US ships were released. The other ships then proceeded to Exmouth Gulf where they arrived to fuel the next day before starting on the return trip to Ceylon less destroyer HMAS Quiberon which was to refit in Australia and was sent to Fremantle.

On 23 May 1944, the Dutch light cruiser Tromp and the destroyers were fuelled at sea by the capital ships and the cruisers.

The ships of Task Force 65 and 66 arrived back at Colombo or Trincomalee on the 26 or 27th.

During this operation several US Submarine guarded the passages to the Indian Ocean to spot a possible Japanese counter attack. The submarines deployed for this purpose were the following; In the Sunda Strait from 12 to 23 May 1944; USS Angler (Cdr. R. I. Olsen, USN) and USS Gunnel (Cdr. J.S. McCain, Jr., USN). South of Lombok Strait from 13 to 20 May 1944; USS Cabrilla (Cdr. W.C. Thompson, Jr., USN) and also the USS Bluefish (Cdr. C.M. Henderson, USN) from 13 May until the night of the 16th. South of Bali Strait from 17 to 20 May; USS Bluefish. North of Bali Strait; USS Puffer (Cdr. F.G. Selby, USN) during the night of 16/17 May.

20 May 1944
USS Angler (Lt.Cdr. R.I. Olsen) torpedoed and sank a Japanese transport east of Malaya, in position 05°57'N, 105°12'E. There is controversy over the target's identity: she was likely the transport Otori maru, 2105 tgr, ex Panamanian Boyac?, as reported by the Japanese owners, but IJN sources place the loss of the vessel on the same day at 05°57'N, 127°11'E, placing her 40 nautical miles south-east of Cabo San Augustin, Davao Gulf, Mindanao island, which would not correspond to any US sub's claim.
It appears there is some confusion in the Japanese records and this writer believes the correct identification of the attacker is USS Angler.

21 May 1944
Almost the entire crew of USS Angler (Lt.Cdr. R.I. Olsen) fell ill, possibly due to contaminated drinking water. She was ordered to return to Fremantle at once.

21 Jun 1944
USS Angler (Lt.Cdr. Franklin Grant Hess) departed from Fremantle for her 4th war patrol. She was ordered to patrol in the South China Sea.

24 Jun 1944
While berthing alongside a barge at Exmouth Gulf to F.G. Hess) hit an uncharted "obstacle". Due to the damage sustained Angler was forced to return to Fremantle to make repairs.

26 Jul 1944
The US submarines USS Angler (Lt.Cdr. Franklin Grant Hess), USS Flasher (Cmdr Reuben Thornton Whitaker) and USS Crevalle (Lt.Cdr. Francis David Walker, jr.), attack a convoy in the South China Sea, east of Luzon. Based on the firing sequences of the 3 subs, it is believed Angler scored a torpedo hit on the seaplane carrier Kiyokawa Maru (6863 GRT, offsite link), in position 18°30'N, 117°57'E. The ship made port with moderate damage. The matter is conjectural, since there is no possible way of determining actual hits obtained.

18 Sep 1944
USS Angler (Lt.Cdr. F.G. Hess) departed from Fremantle for her 5th war patrol. She was ordered to patrol in the Sulu Sea.

4 Dec 1944
USS Angler (Lt.Cdr. Howard Bissell, Jr.) departed from Fremantle for her 6th war patrol. She was ordered to patrol in the Java Sea.

12 Jun 1945
With her overhaul completed USS Angler (Lt.Cdr. H. Bissell, Jr.) departed from Pearl Harbor for her 7th war patrol. She was ordered to patrol east of Honshu, Japan.

21 Jul 1961
Angler was damaged in a minor collision with freighter Export Adventurer during manoeuvres with a destroyer, 15 nautical miles south of Block Island, RI.