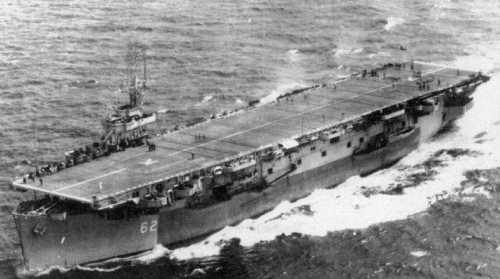 Photographic reconnaissance of the west coast of Sumatra and air attacks on northern Sumatra.

The original intention was to carry out the planned photographic reconnaissance, beginning on 12th April from a flying off position west of Padang. Anti-shipping strikes would follow later.

This programme unfortunately had to be re-cast when HMS Emperor's catapult broke down, necessitating the postponement of the photographic reconnaissance for two days.

Accordingly, on 11 April 1945, HMS Queen Elizabeth, Richelieu and HMS London bombarded Sabang, while HMS Saumarez HMS Verulam and HMS Vigilant bombarded Ulee Lhoe. No shipping was present at Sabang, but the destroyers damaged a small coaster, which was already beached.

' Force 63 ' was subsequently attacked by a force of ten enemy aircraft, two of which were shot down by the Combat Air Patrol.

On 12 April 1945, ships from ' Force 63 ' refuelled from ' Force 70 ' (RFA tanker Easedale (8032 GRT, built 1942) escorted by the frigate HMS Lossie (Lt.Cdr. A.F. MacFie, OBE, RNR)) and HMS London was detached to proceed to Simonstown, South Africa where it had been arranged for her to refit. She was first to return to Trincomalee though.

' Force 63 ' then proceeded to operate off the west coast of Sumatra, and photographic reconnaissance was carried out as planned on 14th and 15th April with almost complete success. One of our aircraft was lost. One enemy aircraft was shot down by the Combat Air Patrol.

An air strike was made on Emmahaven on 16 April, hits being scored on a 4000 ton merchant ship and workshops in the harbour. Our fighters shot down one more enemy aircraft and three were claimed to have been damaged on the ground. Destroyers HMS Venus and HMS Virago, meanwhile made a sweep between the outlying islands and the mainland, from Ayerbangis Bay to Natal Road. A total of six junks were sunk.

The British destroyer HMS Verulam (Lt.Cdr. D.H.R. Bromley, DSC, RN) sailed at 1700 hours to overtake and then join the Task Force. She was joined by HMS Tartar (Capt. B. Jones, DSO and Bar, DSC, RN) as substitute for HMS Penn whose defects could not be repaired in time. HMS Verulam and HMS Tartar eventually joined the Task Force at 1505/11.

During the 13th all destroyers of the Task Force fueled from HMS Emperor, HMS Hunter and HMS Shah. Besides that Task Force 62 was sent out from Trincomalee. This Task Force was made up of the British light cruiser HMS Nigeria (Capt. H.A. King, DSO, RN) and the British destroyers HMS Roebuck (Cdr. C.D. Bonham-Carter, RN), HMS Racehorse (Cdr. J.J. Casement, DSC, RN), HMS Redoubt (Lt.Cdr. F.W.M. Carter, DSC, RN) and HMS Rocket (Lt.Cdr. H.B. Acworth, OBE, RN), which was escorting a convoy, was ordered to leave her convoy and then join this Task Force. Also sailed was Task Force 67, made up of Royal Fleet Auxiliary oiler Olwen escorted by HMS Penn, which by now had completed repairs on her defects.

1740 hours, the 26th Destroyer Flotilla was also detached to return to Trincomalee where they arrived late in the afternoon on the 18th. By this time all the destroyers of this flotilla had fueled from Force 70.

The remaining ships were ordered to return to Trincomalee at 2130/19. They arrived back at Trincomalee on 21 May. (2)

Photographic reconnaissance of Southern Malaya and fighter strikes on airfields in Northern Sumatra.

From flying off position in the northern approaches to the Malacca Straits, aircraft of 888 Squadron, from HMS Ameer made successful photographic reconnaissance flights over southern Malaya from 18 to 20 June.

On 20 June, fighter strikes against the airfields at Lhoksemawe, Medan, and Binjai (all in Northern Sumatra) were made by aircraft of 804, 808 and 809 Squadrons. The runways at Medan and Binjai were put out of action. Attacks on grounded enemy aircraft resulted in three being destroyed, seven left burning and probably destroyed and nine was claimed to have been damaged. Aerodrome buildings, locomotives, and rolling stock were also effectively strafed. Off Medan two junks, one of which was obviously carrying oil, were attacked and set on fire.

Own losses were only one Hellcat shot down by enemy AA fire.

It looked like that ' Force 63 ' had not been detected by the enemy throughout the operation.

At 1340GH/21, HMS Ameer, HMS Stalker, HMS Rotherham and HMS Relentless parted company with the remainder of the force.

HMS Rotherham and HMS Relentless arrived at Trincomalee at 0700FG/23.