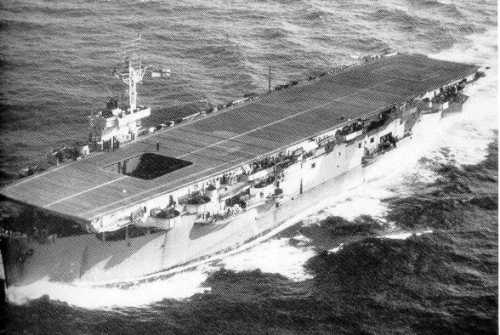 The object of this operation was to achieve any of the following objectives;
a) Bomb and destroyer U-boat depot ships, b) Mining of Stoff, Meloysund or Ramsoyund, c) A fighter attack on Bardenfoss airfield,
d) Bombing of the ferry service between Banaasjoen and Rorvik, e) Attack shipping along the coast between Lodingen and Rorvik.

Heavy weather was encountered and ' Force 8 ' abandoned the operation and returned to Scapa Flow on 25 November 1944.

On 27 November 1944 shipping was attacked successfully by aircraft from HMS Indefatigable, the German transports Rigel (3828 GRT, built 1924, former Norwegian) and Korsnes (1795 GRT, built 1936) were sunk between Rosoya and Tjotta. Heavy loss of live occured on board the Rigel was was transporting troops and POW's (mostly Soviet). Over 2500 men lost their lives in this sinking. These ships had been in convoy and had departed Bodo on 26 November. They were escorted by the patrol vessels V 6308 and NT 04.

The object of this operation was to lay air laid mines in either; a) Ramsoyund, b) Aaramsund or c) Skatestrommen.

The mines were laid in Ramsoyund on 14 December 1944. Also a number of targets in the area were strafed. Three night counter attacks were made on the force by JU 88 torpedo bombers, one of which was shot down.

Operation Spellbinder was carried out in two parts, part I was an anti-shipping raid in the Egersund area and part II was a minelay near Utsira Island.

Operation Gratis was the laying of an air laid minefield in Karm Sund.

They proceeded in company until 1100A/11 when they split up to the north of the Shetlands. ' Force 2 ' remained in that vicinity until 1508A/11 when course and speed were adjusted so as to arrive in the laying position at midnight. ' Force 1 ' set course for the Egersund area, aiming to arrive off the coast at about 2215A/11.

HMS Apollo, HMS Zealous and HMS Carron approached the Norwegian coast from the north-westward at 30 knots, in fine clear weather, making use of the beam of the enemy consol beacon situated in position 58°37'5"N, 05°37'8"E. Course was altered to 090° at 2336A/11 and Utsira light was seen shortly afterwards.

Starshell from ' Force 1 ', engaged 100 miles to the southward, was observed at 2343A/11. Five minutes later ' Force 2 ' reduced speed to 20 knots and HMS Zealous and HMS Carron proceeded ahead to make a smokescreen between the laying position and them mainland.

On completion of this unobserved lay ' Force 2 ' retired at high speed to the northward and then set course to return to Scapa Flow where they arrived around 1450A/12.

' Force 1 ' had picked up Utsira Island by radar at 1940A/11 and an hour later course was altered to close the convoy route south of Stavanger. The ships were positioned in line ahead.

At 2215A/11, ' Force 1 ' altered course to starboard to run down the coast, keeping 10 miles to seaward and parallel to the shipping route. At the same time they were picked up and held by enemy shore radar.

At 2312A/11, when opposite Egersund, radar contact was made with a convoy close inshore and apparently making for Egersund. Course was altered towards the target and fire was opened with starshell at 2341A/11. The appearance of a radar echo on the starboard bow, which was classified as a U-boat, somewhat complicated the movements of ' Force 1 '.

During the ensuing engagement the enemy shore batteries joined in, but although they registered several straddles and near misses they achieved no hits. Rear-Admiral McGrigor reported that out of eight ships which made up the convoy, including escorts, one, probably an escort, escaped into Egersund after being hit. Of the remaining seven, one large merchant vessel was sunk and another one was left blazing to the waterline. One small merchant vessel, or escort, was seen to turn turtle. One M-class minesweeper blew up after running itself ashore in flames. The other three ships were left on fire of which one was seen to blow up when ' Force 1 ' was retiring.

' Force 1 ' withdrew to the west at 0027A/12, altering to the northward when well clear of enemy radar. They made rendezvous with ' Force 3 ' at 0800A/12. At 0910A/12, a shadowing JU 88 was shot down by fighters from HMS Trumpeter. One of the fighters was damaged and had to ditch the pilot being recovered by HMS Zodiac. The Combat Air Patrol was kept busy during the forenoon investigating bogeys, but no enemy attack developed and at 1400A/12, ' Force 3 ' was detached for operation Gratis. ' Force 1 ' then headed for Scapa Flow, passing east of the Shetlands, and arrived at 2205A/12.

Two MTB's from Lerwick had been detailed to rendezvous with ' Force 3 ', to act as Air Sea Rescue craft in the event of a ditching to the east the flying off position. They made rendezvous at 0915A/13, just short of the flying off position. In view of the good weather conditions, flying off commenced immediately and by 0930A/13, the strike, made up of six Avengers from 846 Squadron and eight Wildcats from HMS Trumpeter and six Avengers from 856 Squadron and eight Wildcats from HMS Premier, was airborne. Departure was taken at 0938A/13 and a good landfall was made on Utsira Island. At about 1130A/13 the 12 Avengers laid their mines in the channel between Salhus light and a position 500 yards to the northward. Only light flack was encountered and all aircraft returned safely to the carriers being landed on by 1150A/13. ' Force 3 ' then returned to Scapa Flow arriving there at 2100A/13.

When all aircraft of the strike had been recovered the combines fores retired to Scapa Flow, using the same route as on the outwards passage. HMS Norfolk and HMS Dido were detached at 1735A/12 to return at high speed unescorted. They arrived at Scapa Flow at 0330A/13. The remaining ships arrived around 1050A/13. (3)