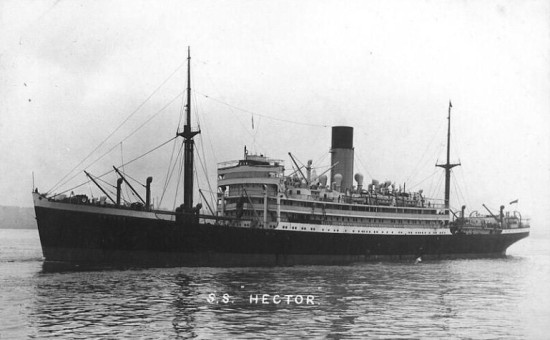 This convoy assembled in the Clyde area on 31 August 1941 for the far east.

ORP Piorun and ORP Garland parted company with the convoy shortly after noon on 3 September to assist a merchant vessel that was being bombed by German aircraft. By then HMS Winchelsea had also left the convoy.

HMS Furious was destined for Gibraltar and operated mainly a little away from the convoy. She left the convoy around 1100 hours on 4 September arrived at Gibraltar on 7 September escorted by HMS Cossack, HMS Zulu, HMS Legion and HMS Lively.

Shortly afterwards around 1300 hours on 4 September the convoy split into two sections, these were; WS 11F (Fast); This convoy was made up of the merchants Bhutan, City of Edinburgh, Duchess of York, Empress of Australia, Glenorchy, Kina II, Largs Bay, Mooltan, Orontes, Otranto, Scythia, Viceroy of India. HMS Guardian was also part of this convoy.

Escort for this part of the convoy was provided by; HMS Repulse, HMIS Sutlej (Later went to the escort of convoy WS 11S), HMS Highlander (detached to fuel at the Azores), HMAS Nestor (Cdr. A.S. Rosenthal, RAN) (joined around noon on 4 September coming from Gibraltar) and HMS Encounter (Lt.Cdr. E.V.St J. Morgan, RN) (joined around 0800 hours on 7 September coming from Gibraltar).

This part of the convoy arrived at Freetown on 13 September 1941.

The other section of the convoy was WS 11S (Slow); This convoy was made up of the merchants Abosso, Barrister, City of Manchester, Glaucus Manchester Progress and Northumberland.

Escort for this part of the convoy was provided by; HMS Derbyhire, HMS Sennen and HMS Totland.

This part of the convoy arrived at Freetown on 15 September 1941.

At Freetown the convoy (now called WS 11B) was re-grouped and departed from there on 18 September 1941 for the Cape.

Escort was provided by the battlecruiser HMS Renown and the armed merchant cruiser Derbyshire. A/S escort was provided until 1800 hours 20 September 1941 by the destroyers HMS Velox and HMS Wrestler after which these returned to Freetown.

The other ships; Barrister, Empress of Australia, Manchester Progress, Mooltan, Otranto and Scythia arrived at Durban on 3 October escorted by HMS Repulse.

The other ships continued with HMS Ceres towards Aden where they arrived on 19 October 1941.

The ships taken over by HMS Glasgow proceeded to Bombay where they arrived on 22 October 1941. Three ships taken over by HMS Glasgow however were destined for Basra. One of these, the Barrister was unable to keep up with the convoy and was detached on 18 October. This ship arrived at Basra on 25 October. The other two ships destined for Basra, City of Edinburgh and Glenorchy were detached on 19 October and both arrived at Basra on 23 October 1941.

They arrived at Colombo on 30 October 1941, minus the Kina II which was detached on 29 October and proceeded independently to Trincomalee.

On 31 October 1941 the convoy, now made up of Ellenga, Glaucus, Johan de Witt, Largs Bay, Nieuw Zeeland Orion and Rangitiki (16698 GRT, built 1929) departed Colombo for Singapore. The convoy was escorted by the light cruiser HMS Mauritius (Capt. W.D. Stephens, RN). They arrived at Singapore on 6 November 1941. (1)