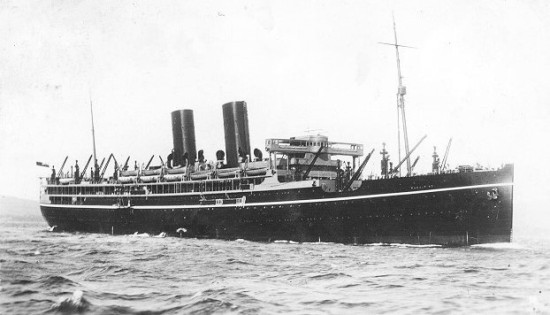 Just after 1500 hours on 23 November the British armed merchant cruiser HMS Rawalpindi (Capt.(Retd.) E.C. Kennedy, RN) sighted the Scharnhorst. Rawalpindi was part of the British Northern Patrol and was stationed south-east of Iceland in the Iceland-Faroe gap. Captain Kennedy at first tried to get away from the German ship and report to the Admiralty that he sighted the German pocket battleship Deutschland, still believed to be operating in the North Atlantic, and so as to buy time so that other ships of the Northern patrol could come to his assistance. Just after 1600 hours, Rawalpindi came within range of the Scharnhorst and was quickly reduced to a flaming wreck. During this engagement Scharnhorst was hit by a 6in shell from Rawalpindi causing only light damage. Scharnhorst and Gneisenau together picked up 27 survivors from the Rawalpindi which finally sank around 2000 hours.