Minesweeper of the Bathurst class 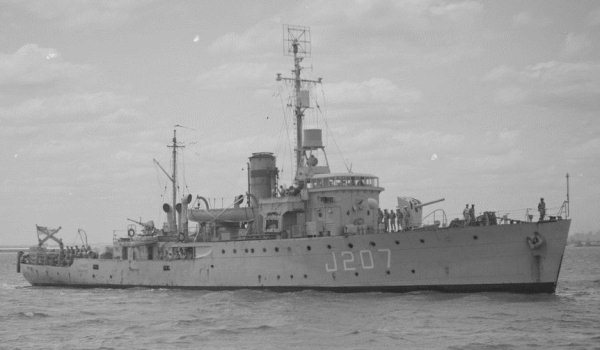 This convoy departed from Sydney and Newcastle on 3 April 1943.

On it's departure from Sydney, around 0900K/3, it was escorted by the minesweeper HMAS Bundaberg (Lt.Cdr. N.D. Pixley, RANR).

It was escorted by the destroyer HMAS Stuart (Lt.Cdr. N.A. Mackinnon, RAN) which had departed Sydney around 0400K/3, to proceed to Newcastle and then pick up the Newcastle section and escort it to a rendezvous with the Sydney section.

Around 1630K/3, rendezvous was effected but HMAS Bundaberg had to return to Sydney due to one of her engine being defective. Minesweeper HMAS Mildura (Lt. C.J.P. Guille, OBE, RANR(S)) was then ordered to take over. She joined the convoy around 0350K/4.

The convoy arrived at Melbourne later on the 6th.

This convoy departed from Melbourne 5 April 1943.

On departure from Melbourne the convoy was escorted by the destroyer FFS Le Triomphant (Cdr. P.A.P. Ortoli).

At Fremantle she was refitted by a relief crew from Submarine Division 262 and USS Anthedon. She was also docked twice for repairs.