Light cruiser of the Arethusa class 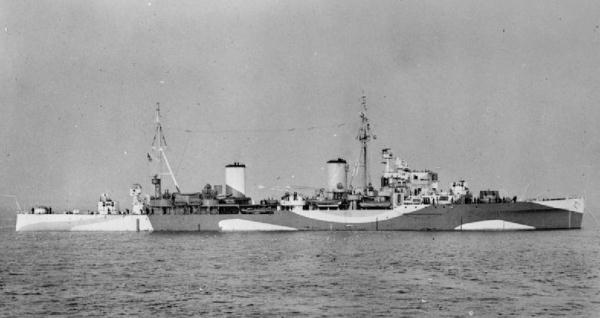 11 Apr 1940
HMS Penelope (Capt. G.D. Yates, RN) entered Vestfjord to support the attack of British destroyers against the German destroyer flotilla of Commodore Bonte at Narvik, but on the way in the cruiser ran aground on rocks off Fleinver and was badly damaged. She was towed clear by the British destroyer HMS Eskimo (Cdr. St.J.A. Micklethwait, DSO, RN). While executing temporary repairs, she was attacked by German bombers, which obtained 4 near-misses to port, within 13 metres of the hull, exacerbating the damage already sustained by hitting the rocks. Penelope eventually reached the Tyne but was under repairs until 7 July 1941.

The two German transports in the convoy Maritza (2910 GRT) and Procida (1842 GRT) are both sunk by HMS Penelope and HMS Lively despite the presence of the Italian torpedo boats Lupo and Cassiopea.

Operation MF 1 and the resulting first Battle of Sirte.

At dark on the 16th HMS Carlisle, HMS Havock and HMS Kingston were detached to make a W/T diversion to the eastward at midnight of the night of 16/17 and then to proceed to Alexandria. They were later joined by HMS Griffin (Capt. H.St.L. Nicolson, DSO and Bar, RN).

Enemy heavy forces were reported at sea at 2230/16 by the submarines HMS Unbeaten (Lt. Cdr. E.A. Woodward, RN) and HMS Utmost (Lt.Cdr. R.D. Cayley, DSO, RN) in the Gulf of Taranto area. Neither submarine was able to attack. The Italians were at sea to cover an imported Axis convoy to North Africa.

Cover was provided by two groups of warships. One group was made up of the battleship Caio Dulio, the light cruisers Emanuele Filiberto Duca D’Aosta, Muzio Attendolo, Raimondo Montecuccoli and the destroyers Aviere, Ascari and Camicia Nera. The other, and larger group, was made up of the battleships Littorio, Andrea Doria, Guilio Cesare, heavy cruisers Gorizia, Trento and the destroyers Granatiere, Bersagliere, Fuciliere, Alpino, Corazziere, Carabiniere, Antoniotto Usodimare, Maestrale, Alfredo Oriani and Vincenzo Gioberti.

The enemy heavy forces were reported by reconnaissance aircraft at 0825/17 and again at 1525/17 when they were with their convoy and only about 60 nautical miles from the Allied convoy. Very few Allied aircraft were available for reconnaissance and shadowing was therefore not carried out at all. At 1745/17 the Allied convoy unexpectedly ran into the larger of the Italian cover forces. The Italian battleships opened fire but drew off to the northward when the Allied convoy escorts closed to attack. Contact was lost in the dark. When both forces made contact HMS Breconshire was detached with HMS Havock and HMS Decoy as escorts. They later made rendez-vous with ‘Force K’.

The original convoy escorts meanwhile retired to the eastward and then proceeded to the north of Benghazi to try to intercept the enemy convoy but as it was bound for Tripoli they made no contact. They therefore retired eastwards and arrived at Alexandria during the night of 18/10 December.

HMS Breconshire and her escorts arrived safely at Malta during the night of 17/18 December 1941. (5)

Both convoys were to converge later but they were delayed by heavy weather.

Cover for the convoy was provided by ‘Force B’ made up of the light cruisers HMS Naiad (Capt. M.A.H. Kelsey, DSC, RN flying the flag of Rear-Admiral P.L. Vian, DSO and 2 Bars, RN), HMS Euryalus (Capt. E.W. Bush, DSO, DSC, RN), HMS Dido (Capt. H.W.U. McCall, RN) and the destroyers HMS Kelvin (Cdr. J.H. Alliston, DSO, RN), HMS Kipling (Cdr. A. St.Clair Ford, RN), HMS Kingston (Cdr. P. Sommerville, DSO, DSC, RN), HMS Foxhound (Cdr. G.H. Peters, DSC, RN), HMS Hotspur (Lt. T.D. Herrick, DSC, RN) and HMS Havock (Lt. G.R.G. Watkins, DSC, RN). This force was due to sail at 2359/16. However when they left the harbour Alexandria was struck suddenly by very bad weather resulting in HMS Kingston and HMS Foxhound colliding with each other causing serious damage to both ships and they were unable to proceed. HMS Hotspur then fouled a propeller and was also unable to proceed. HMS Dido was delayed for a few hours and sailed only at 0545/17 while the remaining ships had departed at 0240/17.

HMS Gurkha, escorting convoy MW 8B, was torpedoed at 0740/17 by the German U-boat U-133 in position 31°50'N, 26°15'E. She was towed clear of the burning oil by HrMs Isaac Sweers which managed to rescue 240 survivors. Only 9 of the crew of the Gurkha lost their lives. While rescueing the crew of the Gurkha, HMS Maori screened them and hunted the attacker but she was unable to obtain contact. HMS Gurkha sank at 0917/17. HrMs Isaac Sweers and HMS Maori then rejoined convoy MW 8B at 1125 hours. HrMs Isaac Sweers was detached at 1540/17 to land the survivors at Tobruk where she arrived at 1745/17 and already left again at 1830/17. She rejoined the convoy the following day at 0200/18.

Both convoy and ’Force B’ eventually joined up at 1100/18. ‘Force K’ made contact at 1315/18 and the convoy then proceeded westwards. There were a number of attacks by single German Ju-88 aircraft during the day but without damage to any of the ships.

Before ‘Force K ‘had joined the transport Thermopylae was detached at 1130/18 due to engine defects and was ordered to proceed to Benghazi escorted by HMS Carlisle, HMS Arrow and HMS Havock. She was later able to make 13 knots and was then ordered to return to Alexandria.

At 1930 hours on the 18th, air reconnaissance had not sighted any enemy warships so HMS Naiad, HMS Euryalus, HMS Dido, HMS Griffin, Kelvin, HMS Kipling, HMS Hero, HMS Hasty, HrMs Isaac Sweers and HMS Jaguar set course to return to Alexandria. HMS Maori joined ‘Force K’ vice HMS Jaguar and HMS Legion also proceeded to Malta as she was to dock there. At daylight on the 19th HMS Hero and HMS Hasty were detached to join the ships escorting the Thermopylae.

However at 0945/19 the Thermopylae was hit by two bombs in the engine room during a bombing attack by a single German JU-88 pressed right home. The ship caught fire and could not be saved. She was eventually scuttled at 1153/19 in position 33°02'N, 24°16'E by a torpedo from HMS Havock.

The remaining ships of the convoy arrived safely at Malta at 1530/19. Heavy enemy air attacks having been held off by effective fighter protection.

’Force B’ had also been attacked on the way back to Alexandria by single German JU-88’s. The only damage done was to HMS Naiad by a near-miss. In the afternoon of the 19th, HMS Kelvin was detached and ordered to proceed to Tobruk to pick up the survivors from HMS Gurkha and take them to Alexandria.

The first ships to return to Alexandria were the ones from ‘Force B’. They arrived around 0830/20. HMS Carlisle, HMS Arrow, HMS Havock, HMS Hasty and HMS Hero arrived shortly afterwards as did HMS Kelvin later on the day with the survivors of HMS Gurkha. (6)

On the 25th HMS Breconshire and ‘Force B’ were shadowed by enemy aircraft. They were attacked by eight German JU-88 bombers between 1445 and 1520 hours. No ships were seriously damaged. HrMs Isaac Sweers sustained six near misses causing the Asdic and Gyro compass to be out of action for a few hours. Two JU-88’s are thought to have been shot down during the attacks. The enemy aircraft are thought to have been damaged.

At noon on the 26h both forces made rendez-vous. ‘Force B’ then turned back with the ships of convoy ME 9 while ‘Force K’ took over HMS Breconshire. Also HMS Lance joined ‘Force B’ vice HMS Kingston.

’Force K’ and HMS Breconshire arrived at Malta around 1000 hours.

19 Mar 1942
In the aftermath of the Battle of the Syrte, attempted towing the damaged Breconshire (9776 GRT) into port, but the freighter sank before reaching safe waters.

20 Mar 1942
In the period between 20-30 March 1942, Axis air attacks on Malta were extremely heavy. Ammunition expenditure by Penelope during the 10-day period amounted to 6.500 rounds of 102 mm (4") and over 75.000 rounds of small calibre. She sustained so much splinter damage to earn the nickname "Pepperpot. Folowing a particularly heavy attack on 26 March, it was decided to send her to the US for repairs. She sailed from Malta on 8 April for New York Navy yard and was under repairs until 1 September. Returned to the Med in early 1943 and was assigned to Force "Q", operating out of Bone, Algeria.

Jun 1943
During the first week of June bombarded Pantelleria and Lampedusa islands, in the Sicilian Channel, on 11 June supported the Pantelleria landings.

Aug 1943
Deployed in support of Operation "Husky", the Sicilian landings.

9 Sep 1943
Deployed in support of the Salerno landings, after the announcement of the Italian Armistice ferried troops to Taranto and in October moved to operate in the Aegean.

Dec 1943
Left the Med for a short period of time to hunt down blockade runners in the Bay of Biscay.

Jan 1944
Deployed in support of the Anzio landings.

18 Feb 1944
My father William C. Moen was a member of PT Boat squadron 216 off the coast of Anzio. My father jumped in the water and helped save several of Penelopes crew just after the Penelope was sunk. He received the Navy and Marine Corps Medal for valor. (7)