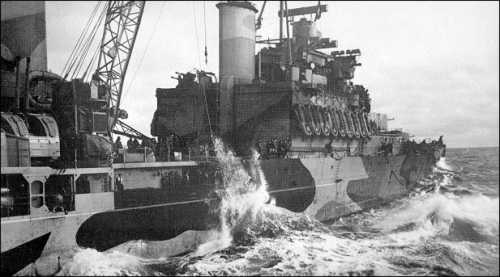 30 Apr 1941
During the night of 29/30 April Trinidad was damaged when she received a direct hit during a German air raid. She was however not seriously damaged.

HMS Liverpool then fuelled HMS Punjabi and HMS Trinidad fuelled HMS Fury. Owning to the bad weather HMS Echo could not be fuelled.

HMS Liverpool then fuelled HMS Punjabi and HMS Trinidad fuelled HMS Fury. Owning to the bad weather HMS Echo could not be fuelled.

Earlier this day, in the early morning, HMS Norfolk (Capt. E.G.H. Bellars, RN) had departed Hvalfiord, Iceland to join the other cruisers at sea which she did shortly after midnight the following morning.

Around 0730 hours, HMS Trinidad, was spotted by enemy aircraft. She was shadowed from then on and Soviet air support, that had been promised failed to show up. At 2200 hours she was attacked by JU 88's dive bombers. After about 25 attacks the force did not sustain serious damage although many ships had been near-missed. About ten torpedo aircraft then attacked at 2237 hours. Then at 2245 hours a lone Ju 88 attacked from the clouds and released a bomb from the height of 400 feet which hit HMS Trinidad right in the area where her previous damage had been starting a serious fire. She was able to avoid the torpedoes that had been fired at her by the torpedo bombers. Trinidad soon took on a 14 degree list to starboard but was still able to make 20 knots.

Shortly before midnight HMS Inglefield and HMS Escapade were detached by the cruiser cover force and set course to proceed to the Kola Inlet to reinforce the escort of the upcoming convoy QP 12.

15 May 1942. In the early morning however the fire in HMS Trinidad got out of control. In the end the ship had to be abandoned and was scuttled at 0120 hours by three torpedoes from HMS Matchless in position 73°35'N, 22°53'E.

The cruiser cover force was attacked by German aircraft (about 25 Ju 88's) for over an hour in the early evening. Many near misses were obtained but none of the ships was hit. By this time the cruiser force had been joined by HMS Punjabi, HMS Matchless, HMS Foresight and HMS Forester.

HMS Inglefield and HMS Escapade arrived at the Kola Inlet.

Both the cruiser cover force as the battlefleet were sighted and reported by enemy aircraft on this day but no attacks followed.

HMS Somali, HMS Matchless, HMS Foresight and HMS Forester, which all had survivors from Trinidad on board, were detached by the cruiser cover force with orders to proceed to Seidisfiord, Iceland to fuel and then to proceed to the Clyde.

HMS Somali, HMS Matchless, HMS Foresight and HMS Forester all arrived at Seidisfiord to fuel. After doing so they departed for the Clyde A.M. HMS Forester which had some wounded survivors from Trinidad on board that required immediate surgery was later diverted to Scapa Flow where she arrived on the 18th. The other three destroyers arrived at the Clyde on the 19th.