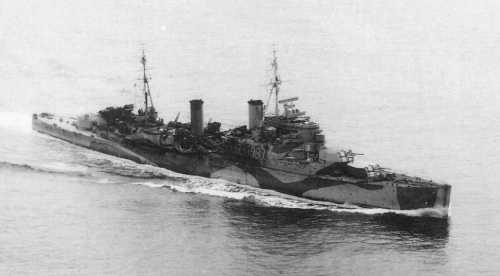 They made rendezvous on 3 April 1942 after which HMS Gambia and HMS Frobisher parted company to proceed to the Clyde.

During the night these ships conducted exercises on completion of which HMS Gambia returned to Kilindini.

All the other ships set course for Aden.

It departed Freetown on 6 July 1940 for Capetown / Durban.

On 24 June HMS Georgetown and HMS Salisbury were detached.

At 1620/27, HMS Vansittart parted company with the convoy to proceed to Ponta Delgada, Azores to fuel and to proceed to Gibraltar afterwards.

Between 0946 and 1023/28, HMS Brilliant fuelled from HMS Malaya. HMS Blackmore was fuelled by HMS Malaya late in the afternoon of the 28th.

At 0800/1, the destroyers HMS Boreas (Lt.Cdr. E.L. Jones, DSC, RN) and HMS Wivern (Cdr. M.D.C. Meyrick, RN) joined the convoy. The were to have joined the day before but were unable to find the convoy due to the bad visibility and the convoy, poor fixes and the convoy being a bit ahead of shedule. HMS Vimy parted company with the convoy shortly after these two destroyer had joined.

The convoy arrived safely at Freetown on 2 July 1942.

On departure from Freetown on 6 July the convoy, in the same composition as in which it had arrived, was escorted by HMS Malaya, HMS Brilliant, HMS Velox, HMS Wivern and HMS Blackmore.

At 1130/7, the troopship Batory parted company with the convoyto proceed to Takoradi escorted by HMS Blackmore. They arrived at Takoradi on 11 July. HMS Blackmore then departed Takoradi, after fuelling, later the same day to rejoin convoy WS 20.

At 1845/8, HMS Wivern was detached to fuel at Pointe Noire to fuel, then proceed to Walvis Bay to fuel there and then rejoin convoy WS 20.

At 0650/9, HMS Brilliant was detached to fuel at Pointe Noire.

At 1815/9, HMS Boreas joined the convoy coming from Takoradi. HMS Velox was then detached to Lagos.

At 0705/17, HMS Brilliant and HMS Wivern were detached to Simonstown.

At 0800/17, heavy cruiser HMS Shropshire (Capt. J.T. Borrett, OBE, RN) joined the convoy to take care of the Durban section. The Capetown section then split off escorted by HMS Malaya and HMS Blackmore. The Capetown section arrived at Capetown later the same day. It was made up of the troopships / transports; Abosso, Adrastus, Banfora, Bergensfjord, Cuba, Duchess of Richmond, Empire Pride, Empress of Australia, Esperance Bay, Leopoldville and Palma.

At 0830/18 (GMT), HMS Brilliant and HMS Wivern departed Simonstown to join the Durban section of the convoy that was being escorted by HMS Shropshire.

The Durban section arrived at Durban in the moning of July, 20th. HMS Shropshire parted company to proceed to Simonstown. HMS Brilliant and HMS Wivern then patrolled off Durban until the last ships of the convoy had entered the harbour. The Durban section had been made up of the troopships / transports; Arundel Castle, Awatea, Durban Castle, Empress of Russia, Nigerstroom, Orion, Stratheden and Strathmore.

In the morning of 21 July 1941 the troopships / transports Abosso, Adrastus, Bergensfjord, Cuba, Duchess of Richmond, Empire Pride, Empress of Australia, Leopoldville and Palma departed Capetown to the rendez-vous point near Durban. They were escorted by the escort destroyer HMS Blackmore. Around 1600/21 they were joined by the battleship HMS Malaya which had departed Simonstown at 1215/21.

Around 0930/26 the convoy arrived off Durban where it merged with the Durban section.

The Durban section was made up of the troopships / transports; Arundel Castle, Orion, Stirling Castle and Stratheden. They wer escorted by the light cruiser HMS Gambia (Capt. M.J. Mansergh, CBE, RN) and the destroyers HMS Brilliant and HMS Wivern.

HMS Malaya split off from the Capetown section to proceed to Capetown escorted by HMS Brilliant and HMS Wivern. HMS Blackmore entered Durban.

The convoy was now made up of the troopships / transports; Abosso, Adrastus, Arundel Castle, Bergensfjord, Cuba, Duchess of Richmond, Empire Pride, Empress of Australia, Leopoldville, Orion, Palma, Stirling Castle and Stratheden and was being escorted by HMS Gambia.

At 0900/30, the convoy, now to the east of Madagascar, was joined by the heavy cruiser HMS Frobisher (Capt. J.F.W. Mudford, RN) and the armed merchant cruiser HMS Worcestershire (A/Capt.(Retd.) E.H. Hopkinson, RN). The troopship Stirling Castle then split off to proceed to Mauritius escorted by HMS Gambia.

At 1410/31, HMS Worcestershire parted company with the convoy. Her speed had proven to be be to low and she had difficulty keeping up.

From 29 August to 1 September 1942 a large exercise was carried out with landings at Tanga, Dar es Salaam, and Zanzibar by Royal Marines and at Kilindini by the 29th Brigade.

A/Vice-Admiral Willis was in command of the operation.

The convoy was joined on the 4th by the British heavy cruiser HMS Devonshire (Capt. D. Young-Jamieson, RN).

In the afternoon of the 18th the convoy arrived off Fremantle.

Around 1615 hours on the 24th the convoy was joined by the Australia (Capt. H.B. Farncomb, MVO, DSO, RAN) heavy cruiser HMAS Australia and the US destroyers USS Henley (Lt.Cdr. E.K. van Swearingen, USN) and USS Bagley (Lt.Cdr. T.E. Chambers, USN). The New Amsterdam escorted by HMAS Adelaide, HrMs Heemskerk and HrMs Tjerk Hiddes then departed the convoy and proceeded to Melbourne where they arrived arrived noon on the 25th. The other ships continued to Sydney.

In the afternoon of the 26th the Dutch light cruiser HrMs Heemskerck rejoined the convoy. Later in the afternoon the Free French destroyer Le Triomphant (Capt. Ortoli) also joined.

The convoy arrived at Sydney on the 27th.

Due to some missing pages in the ships log no map for the daily positions during the period of 3 March 1943 to 6 March 1943 can be displayed. (6)

All ships returned to the harbour in the morning of May 7th minus HMS Mauritius which returned in the afternoon. (9)