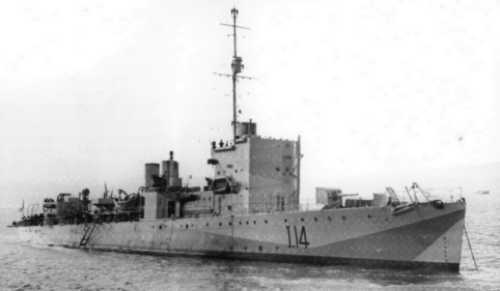 HMS Clare as seen in Plymouth Sound in October 1941 upon completion of her reconstruction to long range escort. World Ship Photo Library photograph with thanks to Jan Visser.

Commands listed for HMS Clare (I 14)

The escorts varied from time to time until their return to Gibraltar.

On 9 November, HMS Sheffield parted company to join the Force destinated for a landing at Bougie but as this landing was postponed due to unsuitable weather conditions she rejoined ' Force O ' temporarily. In the afternoon of the 10th she parted company again for this operation.

On the 10th ' Force O ' was about 20 miles north of Algiers, with the escorts fuelling in turn from ' Force R ', the tanker Force, but from dawn until about noon on the 11th, ' Force O ' was off Bougie after which it returned to the area of Algiers.

In the late afternoon of the 11th, ' Force O ', including HMS Sheffield which had rejoined in the early afternoon, was heavily attacked from the air by (13) Ju 88's and HMS Argus sustained some minor damage as a bomb hit the extreme edge of the flight deck. Shortly afterwards, the sloop HMS Ibis (Cdr. H.M. Darell-Brown, RN), which was screening HMS Argus and HMS Scylla at that moment was hit by a torpedo and sank very quickly. HMS Scylla rescued 5 officers and 102 ratings, the destroyer HMS Clare (Lt.Cdr. L.H. Landman, RN) later picked up another 3 ratings.

At 1855Z/12, the destroyer HMS Clare, attacked a submarine in position 37°41'N, 00°10'W and she considered to have destroyed it. It was later classified as probably destroyed. The submarine on the receiving end was the German U-596 who managed to escape without damage.

On 25 January 1943 the destroyer HMS Clare parted company to return to Londonderry. The escort destroyer RHS Miaoulis had lost touch with the convoy during the night of 24/25 January 1943. She was unable to regain touch and was also ordered to return to Londonderry. Her sister ship RHS Adrias had also lost touch but apparently was able to regain contact.

Around 1730A/26, the Antenor parted company with defects to return to the Clyde. It appears that she was escorted back to the Clyde by the sloop Savorgnan de Brazza.

Convoy KMF 8 continued on towards the Mediterranean and was made up of the transports Circassia, Duchess of York, Dunnottar Castle, Empire Pride, Letitia, Samaria, Strathnaver, Tawali and the aircraft carrier HMS Argus. They were escorted by HMS Egret, HMS Banff, HMS Fishguard and HMS Test.

Around 1630A/30, HMS Argus and the transport Letitia parted company with convoy KMF 8 to proceed to Gibraltar. They entered Gibraltar Bay around 0330A/31. Presumably they were escorted by the frigate HMS Test which also arrived at Gibraltar on this day.

The transport Strathnaver was detached to proceed to Oran escorted by HMCS Alberni, HMCS Baddeck, HMCS Luneburg and HMCS Summerside.

When the convoys split up, WS 26 continued on to Freetown. It was made up of the transports . They were escorted by the armed merchant cruisers HMS Canton, HMS Cilicia, destroyers HMS Quadrant, HMS Relentless and the escort destroyer RHS Adrias.

The destroyers HMS Quadrant, HMS Relentless and escort destroyer RHS Adrias parted company on 31 January to fuel at Casablanca from where they departed again on 1 February to rejoin the convoy.

On 4 February the transport Leopoldville parted company with the convoy escorted by the destroyer HMS Redoubt. They arrived at Bathurst on 5 February.

On 12 February HMS Corinthian and RHS Adrias parted company with the convoy.

At 1145AB(-1.5)/13, the destroyer HMS Relentless joined the convoy coming from Lagos having departed there on 12 February immediately after being undocked.

In the morning and early afternoon of the 14th, HMS Racehorse and HMAS Quickmatch fuelled from HMS Canton.

On the 15th the destroyers HMS Quality and HMAS Quiberon arrived at Porte Noire to fuel. After doing so they departed again to rejoin the convoy. Also on the 15th the Commandant d'Estienne d'Orves fuelled from HMS Canton.

On 22 February the Capetown section of the convoy, made up of Arundel Castle, California, Cheyebassa, Duchess of Richmond, Highland Chieftain, Orduna, Ruys, Sibajak and HMS Wayland arrived there with part of the escort, some of which then went to Simonstown.

On 26 February 1943 the Capetown section departed there to proceed towards Durban. It was now made up of the transports Arundel Castle, California, Cheybassa, Highland Chieftain, Orduna and HMS Wayland. The convoy was escorted by the armed merchant cruiser HMS Canton, destroyer HMS Relentless and the escort destroyers HMS Catterick (Lt. A. Tyson, RN) and HMS Blackmore.

At 0115C/1, HMS Relentless was detached to proceed ahead to Durban to fuel.

On completion of fuelling she returned from Durban together with the corvette HMS Freesia (T/A/Lt.Cdr. R.A. Cherry, RNR), and the minesweepers HMIS Carnatic (Lt. H.J.D. Hamilton, RIN) and Commandant Duboc.

HMS Canton parted company with the convoy and entered Durban.

Around 1500D/6, the Lancashire was detached to Tamatave escorted by the Commandant Duboc.

Around 0300C/8, HMS Ceres parted company with the convoy to proceed to Diego Suarez.

Around 0800CD(-3.5)/9, HMS Resource was detached from the convoy to proceed to Kilindini escorted by HMS Birmingham. The heavy cruiser HMS Hawkins (Capt. G.A. French, RN) had joined just before.

Around 0700D/11, the convoy split up into the Aden section and the Bombay section.

The Aden section was made up of the Arundel Castle, City of Paris, Highland Chieftain, Maloja, Orduna, Rembrandt and Selandia. They were escorted by HMS Frobisher. They arrived off Aden on 15 March 1943 where the convoy was dispersed.

The Bombay section was made up of the California, Chyebassa, Dempo, Dominion Monarch, Mooltan and Stratheden. They were escorted by HMS Hawkins. They arrived at Bombay on 17 March 1943.

On departure from Liverpool the convoy was escorted by the corvette HMS Oxlip (Lt. C.W. Leadbetter, RNR).

Cover for the convoy during part of its passage was provided by the AA cruiser HMS Charybdis (Capt. G.A.W. Voelcker, RN) and the destroyer ORP Orkan (Cdr. S. Hryniewiecki) which were on patrol off the Bay of Biscay having departed Plymouth on 23 May.

The convoy arrived at Gibraltar on 31 May 1943 minus the merchant vessels City of Lancaster, Greathope, Gullpool, Hallfried, Shetland and Volturno which had been detached to Lisbon on 29 May 1943.