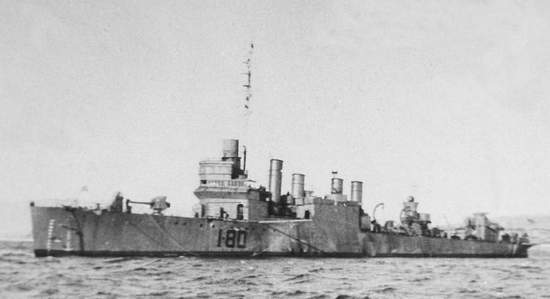 HMS Sherwood as modified during the war, note the radar installed on the bridge

Commands listed for HMS Sherwood (I 80)

In the morning of March 25, HMS Mauritius is ordered to proceed to position 07°24'N, 24°35'W and investigate a raider report.

At 1359/25, the battlecruiser HMS Repulse (Capt. W.G. Tennant, CB, MVO, RN) was ordered to complete with fuel and then depart Freetown to overtake the convoy to join the escort. HMS Repulse arrived near the convoy around 1700/27 and then started to provide 'distant' cover.

At 1941/25, the aircraft carrier HMS Furious (Capt. A.G. Talbot, DSO, RN and the destroyers HMS Duncan (Lt.Cdr. A.N. Rowell, RN) and HMS Foxhound (Cdr. G.H. Peters, DSC, RN) were ordered to leave Freetown at 0700/26 and to overtake and join the convoy as well. This order was cancelled at 0301/26 but at 1121/26 the ships were ordered to sail as soon as possible to overtake the convoy wich they did around 2300/27 after which the destroyers returned to Freetown.

On 26 March 1941 the convoy was joined by the armed merchant cruiser HMS Bulolo (Capt.(Retd.) R.L. Hamer, RN). She remained with the convoy until March, 29th as did the corvettes HMS Clematis and HMS Cyclamen.

On 29 March, HMS Repulse, HMS Furious, HMS Duncan, HMS Foxhound parted company with the convoy escorting the troopship Narkunda to Gibraltar where they arrived on 3 April.

HMS Mauritius had been ordered to rejoin the convoy when Repulse would leave it. She remained with the convoy until 5 April 1941 when she was relieved by the light cruiser HMS Edinburgh (Capt. C.M. Blackman, DSO, RN, flying the flag of Vice-Admiral L.E. Holland, CB, RN).

In the early evening HrMs O 10 was hit by a practice bomb that damaged the pressure hull. The exercise was then cancelled and O 10 proceeded to Londonderry for repairs. (1)

This convoy departed the Clyde on 31 May 1941 and arrived off Aden on 11 July 1941 after which the convoy was dispersed and the ship proceeded to Aden independently.

Around 1445B/2, ORP Piorun obtained an A/S contact in position 53°30'N, 16°46'W at a range of 1200 yards. She immediately attacked with depth charges. A total of 18 depth charges was dropped in four attack runs after which the contact was lost and Piorun rejoined the convoy around an hour later.

Around 1200B/3, in position 49°20'N, 20°30'W, HMS Esperance Bay was detached to search for enemy supply vessels operating in the North Atlantic.

Around 1845B/3, HMCS Sauguenay parted company to proceed to Canada.

At 1825B/4, in position 42°25'N, 23°39'E, HMS Neptune was detached to intercept a vessel reported by the Esperance Bay as well as aircraft from HMS Victorious.

Around 2100B/4, HMS Victorious was also detached to aid in the search of this suspected enemy supply vessel.

Around 2100B/5, HMS Victorious and HMS Neptune rejoined the convoy. The enemy vessel had been intercepted but had been scuttled by her crew and salvage was not possible. HMS Neptune had picked up the German crew.

Around 0100A/7, HMS Victorious and HMS Neptune parted company. They had been ordered to proceed to Gibraltar.

The corvette HMS Aster (Lt.Cdr. E. Hewitt, RD, RNR) was to have joined the convoy coming from Bathurst. She had arrived at Bathurst late and she did not manage to join the convoy.

The convoy arrived at Freetown on 11 June.

The convoy departed Freetown on 15 June 1941 escorted by HMS Neptune.

The convoy arrived at Capetown on 24 June 1941 after which HMS Neptune proceeded to Simonstown.

The convoy arrived at Kilindini on 6 July 1941. It departed later the same day for Aden.

The convoy was dispersed on 11 July 1941. HMS Neptune then proceeded to Aden arriving later the same day. (2)

Shortly after noon on the 24th, HMCS St. Laurent and HMS Skeena parted company with the convoy and proceeded to St. John's.

Around noon on the 27th, HMS Ramillies, HMS Harvester, HMS Havelock and HMCS Assiniboine parted company with the convoy and proceeded to Reykjavik, Iceland.

The convoy arrived in the Clyde in the morning of June, 30th.

This convoy was formed off Oversay on 9 December 1941.

In the afternoon of the 11th, HMS Newark parted company with the convoy due to damaged fuel tanks.

Bad weather was experienced on the 11th, and late in the evening, the Empire Oriole had to heave to in order to secure tanks that were carried as deck cargo. She did not rejoin the convoy and proceeded independently to Freetown arriving there on 23 December.

Also on 13 December (around 0500 hours) the Scythia left the convoy due to ' not being under control '. She did not rejoin the convoy and arrived independently at Freetown on 23 December.

At 2200Z/14, in approximate position, 36°07'N, 23°24'W, HMS Vanquisher was detached to fuel at Ponta Delgada, Azores. She was detached earlier then intended due to condenser trouble.

The convoy arrived at Freetown on 21 December 1941.

The convoy departed Freetown on 25 December 1941 for South Africa.

At 1800Z/26, in approximate position 03°02'N, 12°25'W, HMS Brilliant parted company with the convoy, taking the troopship Abosso with her. They were to proceed to Takoradi.

At 0400Z/27, the Orestes fell out of line with engine trouble. As by noon she was not in sight HMS Vimy was ordered to search for her. She reported at 1800Z/27 that she had found the Orestes which was now able to proceed at 14 knots. HMS Vimy was then ordered to return to Freetown. The Orestes then proceeded to Capetown unescorted.

At 0600Z/29, HMS Beaufort was detached to fuel from the Rapidol.

At 1100Z/30, HMS Hurworth was detached to fuel from the Rapidol but she could not find the tanker and rejoined the convoy at 1930Z/29. Fortunately the tanker was then sighted on the convoy's beam and she was able to fuel after all. On completion of fuelling she started a search for an unidentified ship that had been sighted earlier by the Rapidol.

At 1845A/31, HMS Hurworth rejoined the convoy. The ship reported by the Rapidol had not been sighted.

At 0100Z/3, the Andes was detached to proceed ahead of the convoy to Capetown where politicians were to be landed. She later joined the Durban section of the convoy.

At 1600Z/4, in approximate position, 33°12'S, 15°45'E, HMS Derbyshire parted company with the convoy taking the Durban section of the convoy with her. The Durban section was made up of the Andes, Athlone Castle, Cameronia, Duchess of Atholl, Durban Castle, Esperance Bay, Highland Princess, Oronsay, Reina del Pacifico, Scythia and Strathallan.

The Capetown section of the convoy, made up of the City of Pretoria, Clan Cameron, Empire Condor, Empire Curlew, Empire Egret, Empire Oriole, Empire Peregrine, Empire Pintail, Empire Widgeon, Empress of Australia, Highland Monarch, Orcades, Troilus and Warwick Castle arrived at Capetown early in the morning escorted by HMS Ramillies, HMS Beaufort and HMS Hurworth. The escort destroyers then proceeded to Simonstown. The Orestes arrived later in the morning.

In the morning of the 8th the convoy arrived at Durban in three sections in order to avoid congestion in the swept channel. Each of the escorts, HMS Ceres, HMS Bridgewater and HMS Derbyshire took one section under their orders.

The Orestes was also to have joined the convoy but she was delayed, probably due to repairs, and she sailed later with orders to overtake the convoy.

In the early morning of the 10th both corvettes parted company to return to Capetown.

Also the Orestes caught up with the convoy off Durban and joined.

The Orcades of the Capetown section parted company with the convoy and entered Durban.

The Duchess of Athol soon developed engine trouble and returned to Durban. Her troops were transferred to the Andes and this ship then departed Durban on 14 January 1942, escorted by HMS Ceres to overtake the convoy which Andes did early on the 16th. HMS Ceres then set course to return to Durban where she arrived on the 18th.

Early on the 19th, rendezvous was made with the battleship HMS Royal Sovereign (Capt. R.H. Portal, DSC, RN) which then took the ships of Singapore with her forming convoy DM 2. These were the City of Canterbury, City of Pretoria, Dunera, Empress of Australia, Malancha, Troilus and Warwick Castle. They then set course for Port T (Addu Atoll).

The convoy then split into two more sections; convoy WS 14A was to proceed to the Gulf of Aden where it was to disperse. It was made up of the Empire Egret, Empire Oriole, Empire Pintail, Highland Morarch, Mendoza, Orestes and Salween. HMS Colombo was escorting these ships. The convoy was dispersed on 26 January 1942 in the Gulf of Aden. The Thysville proceeded independently to Aden as she had straddled from the convoy not long after it had departed Durban due to bad coal having been supplied.

HMS Corfu took the remainder of the ships with her towards Bombay. This convoy was then known as convoy WS 14B and was made up of the Andes, Clan Cameron, Dilwara, Empire Condor, Empire Curlew, Empire Peregrine, Empire Widgeon, Esperance Bay and Nova Scotia.