Destroyer of the B class 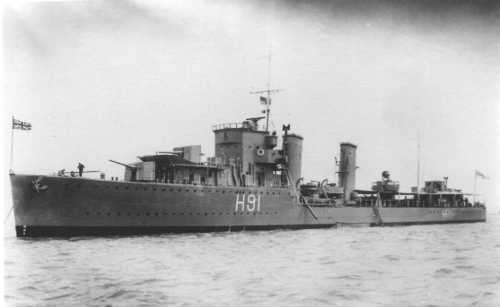 9 May 1940
During the night of 9/10 May, the destroyer was searching in the Skagerrak for German minelayers with other destroyers from Scapa Flow. During an attack by German MTBs at another Task Force with the same task, HMS Kelly was badly damaged by a torpedo and towed to Newcastle by HMS Bulldog.

For the daily and attack positions of HMS Clyde during this patrol see the map below.

The destroyers HMS Somali (Capt. C. Caslon, RN), HMS Matabele (Cdr. R.St.V. Sherbrooke, DSO, RN) and HMS Punjabi (Cdr. J.T. Lean, DSO, RN) had departed Sullom Voe on 22 October and were on patrol to the east of the Shetlands. They were ordered to intercept (operation DNU) a group of 20 'German' fishing vessels and a patrol vessel that were reported off Egersund.

These destroyers intercepted and sank the German weather ship WBS 5 / Adolf Vinnen (391 GRT, built 1929) west of Stadlandet in position 62°29'N, 04°23'E on 24 October 1940. This weather ship had been operating north of Iceland and was on the return trip back to Norway.

All ships arrived back at their bases on 24 October 1940. HMS Bonaventure had sustained some damage to her forecastle in the heavy weather conditions (4)

1941
During the summer of 1941 Dr. Edward Lee performed trials with Britain's first infrared spectrometer for infrared recognition aboard HMS Bulldog.

Dr. Lee built the detection system which proved crucial to the identification of enemy aircraft in the Second World War.

At the outbreak of war, Dr. Lee joined the Admiralty Research Laboratory in Teddington, working initially on radar; then, using the research from his work on the spectrometer, he worked on developing the type F infrared rays recognition system to help allied pilots distinguish enemy aircraft from their own planes at night. The system employed the transmission of intermittent infrared light beams from lamps attached to aircraft' tailfins. The beams were invisible to the naked eye, but could be detected by fellow pilots via a special receiver.

9 May 1941
HMS Bulldog was responsible for the capture of U-110, her Sub Lt David Balme finding the Enigma code machine ciphers and code books. U-110 was taken on tow and Bulldog kept her afloat for 17 hours then let the towline slip. The intention was to tow U-110 into Iceland but Admiralty realised this would have been a massive error of judgement. In the event, allegedly, U-110 resolved the matter herself by sinking. (6)

9 May 1941
German U-boat U-110 was captured on 9 May 1941 in the North Atlantic south of Iceland by the British destroyers HMS Bulldog (Lt.Cdr. A.J.B. Cresswell, RN) and HMS Broadway (Lt.Cdr. T. Taylor, RN) and the British corvette HMS Aubretia (Lt.Cdr. V.F. Smith, RNR). The U-boat was allowed to sink the day after to preserve the secret capture.

Convoy operation to and from northern Russia, convoy's PQ 14 and QP 10.

The close cover force for convoy PQ 14 departed Seidisfiord on this day, as stated before it was made up ofthe light cruiser HMS Edinburgh and the destroyers HMS Foresight and HMS Forester.

Also the heavy cruiser HMS Norfolk (Capt. E.G.H. Bellars, RN) departed Scapa Flow to patrol in an area about 130 nautical miles south-west of Bear Island from where she could support either convoy during this part of their passages.

From the initial close escort of convoy PQ 14, HMS Wilton, HMS Hebe, HMS Speedy and two of the A/S trawlers were damaged by ice and their Asdic gear was out of action as the convoy encountered thick ice during 11 and 12 April.

As stated above the light cruiser HMS Liverpool departed the Kola Inlet to provide close cover for convoy QP 10 and the destroyers HMS Bedouin, HMS Eskimo, HMS Punjabi and HMS Matchless departed Scapa Flow to fuel at Skaalefiord in the Faroe Islands.

All ships from the close cover and close escort force that had departed Seidisfiord on the 10th joined convoy PQ 14. HMS Wilton and one of the A/S trawlers left the convoy and proceeded to Seidisfiord where they arrived the next day. Also the RFA tanker Aldersdale left the convoy.

As stated above ships from the Home Fleet departed Scapa Flow on this day to provide cover for convoy's PQ 14 and QP 10. Later this day the destroyers that had departed Scapa Flow yesterday and that had fuelled at Skaalefiord in the Faroe Islands joined the fleet at sea after which the destroyers HMS Faulknor, HMS Escapade, HMS Onslow and HMS Offa left the fleet to also fuel at Skaalefiord.

Also around 1645 hours this day the German submarine U-435 reported being shelled by three destroyers. This was however most likely HMS Liverpoo which reported firing on a surfaced submarine at exactly this time.

HMS Speedy, which was damaged by ice, parted company with convoy PQ 14 and proceeded to Reykjavik.

HMS Hebe, which was also damaged by ice, also parted company with convoy PQ 14 and proceeded to Akureyri, providing escort for tanker Aldersdale for part of the way.

In the morning, HMS Faulknor, HMS Escapade, HMS Onslow and HMS Offa, rejoined the Home Fleet at sea after fuelling at Skaalefiord in the Faroe Islands. The four 'Hunt-class' destroyers then parted company with the Home Fleet and HMS Belvoir, HMS Ledbury and HMS Middleton proceeded to Scapa Flow while HMS Wheatland was to make rendez-vous with the RFA oiler Aldersdale and escort her to Seidisfiord, Iceland.

German aircraft were heard homing U-boats on convoy QP 10 which resulted in two of them attacking the convoy shortly after midnight.

At 0059 hours the German submarine U-436 torpedoed and sank the Russian merchant Kiev (cargo; chrome ore and timber) which sank with the loss of six of her crew. The survivors were picked up by HMS Blackfly.

Then at 0129 hours the German submarine U-435 torpedoed and sank the Panamanian merchant El Occidente (cargo; chrome ore,but only as ballast). 20 of her crew crew lost their lives and 21 survivors were picked up by HMS Speedwell. Following this attack U-435 was depth charged by the destroyer HMS Oribi but she sustained no damage.

Then at 1127 hours, U-435 attacked a destroyer with one torpedo which missed. This apparently was HMS Eclipse which then counter attacked with depth charges which slightly damaged U-435.

At 1530 hours, U-435 came across the abandoned wreck of the British merchant vessel Harpalion. This ship had been heavily damaged by German Ju 88 aircraft and had been abanadoned. A reported scuttling attempt by the convoy escort must have failed. Three torpedoes were fired at the wreck of which the third torpedo struck aft. The vessel was seen to sink slowly by the stern after about 20 minutes.

14 April 1942. Convoy PQ 14 was now finally clear from the ice. Only nine merchant vessels were left that were able to continue the passage to north Russia. Six more stagglers were unaccounted for and eventually joined convoy QP 10 and returned to Iceland.

HMS Hebe arrived at Akureyri from the escort of convoy PQ 14.

Also on this day the German submarine U-403 torpedoed and sank the ship of the convoy commodore of PQ 14, the British merchant Empire Howard in position 73°48'N, 21°50'E. Survivors from this ship were picked up by the A/S trawlers HMS Lord Middleton and Northern Wave.

Convoy QP 10 was again spotted by enemy and shadowed. HMS Kent left the Home Fleet and joined the close cover force for this convoy.

What remained of convoy PQ 14 was joined by a eastern local escort made up of the Russian destroyers Gremyashchiy, Sokrushitelny and the British minesweepers Gossamer, Harrier, Hussar and HMS Niger (Cdr.(ret.) A.J. Cubison, DSC and Bar, RN).

The destroyer HMS Eclipse from the close escort of convoy QP 10 left to fuel at Seidisfiord.

HMS Faulknor, HMS Somali, HMS Bedouin and HMS Matchless arrived at Seidisfiord to fuel. After doing so they left in the afternoon and rejoined the Home Fleet at sea later the same day.

Also HMS Ledbury, HMS Middleton, HMS Lamerton and HMS Hursley arrived at Skaalefiord where they fuelled and then departed to join the Home Fleet at sea.

HMS Eclipse arrived at Seidisfiord. After fuelling she departed for Scapa Flow in the afternoon.

HMS Eskimo, HMS Offa and HMS Escapade then parted company with the Home Fleet to fuel at Skaalefiord where the arrived in the afternoon. After fuelling they departed for Scapa Flow later the same day.

The two cruisers from the close cover force for convoy QP 10 left this convoy in position 67°43'N, 12°56'W. HMS Kent set course for Scapa Flow, HMS Liverpool for Seidisfiord, Iceland to fuel there.

HMS Liverpool arrived at Seidisfiord to fuel. After doing so she departed for Scapa Flow in the afternoon.

What remained of convoy PQ 14 arrived at Murmansk.

These were followed by exercises in which HMS Skate (Lt.Cdr.(Retd.) A.W. Preston, RN) served as target for HMS Universal. (15)

9 May 1945
The surrender of the Channel Islands was signed on board her.