Destroyer of the J class 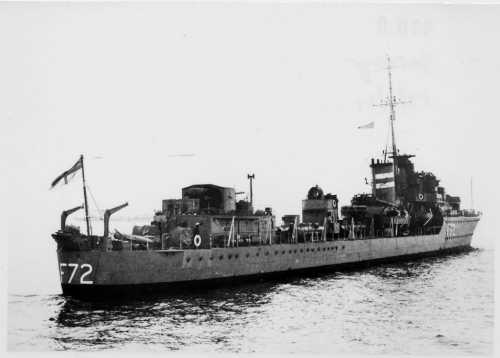 5 Sep 1939
HMS Southampton (Capt. F.W.H. Jeans, RN) intercepts the German merchant Johannes Molkenbuhr (5294 GRT) off Stadlandet, Norway in position 61°40'N, 03°51'E. The Germans scuttled their ship before it could be captured. The crew was taken off by HMS Jervis (Capt. P.J. Mack, RN). The ship was then finished off by HMS Jersey (Lt.Cdr. A.M. McKillop, RN).

6 Dec 1939
During the night of 6/7 December 1939 the German destroyer Z 12 escorted by her sister ship Z 10 was on an offensive mining operation off Cromer. At 0255hours, just 15 minutes after the lay had been completed, the German ships sighted the British destroyers HMS Juno (Cdr. W.E. Wilson, RN) and HMS Jersey (Lt.Cdr. A.M. McKillop, RN) about 8000m away. The Germans turned to a parallel course and by 0310hours had closed range to 4,600m while remaining undetected themselves. Z 10 fired three torpedoes at Juno, the lead British ship while Z 12 sent four more torpedoes at Jersey. Z 10's salvo missed, but Z 12 scored with one torpedo. The blow started a large fire and caused damage that required ten months to repair. Juno turned back to assist Jersey, making smoke; apparently the British believed a submarine had attacked them. The Germans still had the advantage of surprise and fired at least five more torpedoes, but then they decided to break off the action and return for home. HMS Jersey was under repair until 23 September 1940.

10 Oct 1940
HMS Jersey (Lt.Cdr. W. Evershed, RN) set off a mine when leaving the Humber and sustained some damage, repairs were carried out in the docks in London. Jersey arrived at Plymouth on the 13th October.

Upon completing these exercises H 43 departed Plymouth for Holyhead. She was escorted by HMS Troubadour (Cdr.(Retd.) D.H. Milward, DSC, RNR). (1)

29 Nov 1940
The 5th British destroyer flotilla (Capt. Lord Louis Mountbatten), HMS Javelin (flag), HMS Jupiter, HMS Kashmir, HMS Jackal and HMS Jersey encounters the German destroyers Karl Galster, Hans Lody and Richard Beitzen while these were conducting an anti-shipping raid off Plymouth. In the gun/torpedo battle that followed HMS Javelin was hit by two torpedoes, losing both her bow and stern. Only 155 feet of Javelin's original 353 foot length remained afloat and was towed back to harbour. Javelin was out of action for almost a year. (2)

8 Dec 1940
HMS Manchester (Capt. H.A. Packer, RN) departed Gibraltar for Scapa Flow. She was escorted by the destroyer HMS Jersey (Lt.Cdr. W. Evershed, DSO, RN) until 11 December when she was detached to Plymouth. (3)

On 8 February the Italian fleet left port and steamed south after they received reports of British carrier aircraft south of the Balearics. The Italians thought that there was another convoy to Malta.

Early in the morning of 9 February Renown, Malaya and Sheffield bombarded the Italian city of Genoa. In the harbour 4 ships were sunk and 18 were damaged. Also the city itself was damaged.

The Italian fleet turned around and tried to intercept the British ships but due to the bad weather this failed.

In the meantime Ark Royal's aircraft raided Livorno and mined the harbour of La Spezia.