Destroyer of the R class 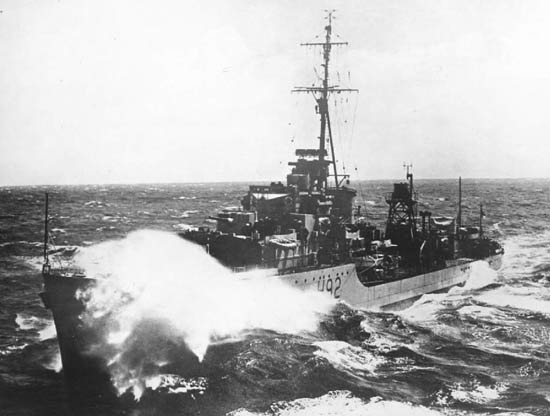 In the early hours of the 25th the carriers, HMS Illustrious and HMS Victorious, separated from the fleet under the escort of HMS Phoebe, HMS Roebuck and HMS Raider, and launched a total of 34 fighter aircraft to attack airfields in the area (18 Corsairs from HMS Illustrious and 16 Corsairs from HMS Victorious). One Corsair fighter was damaged by AA fire from the enemy and crashed into the sea, the pilot was picked up by HMS Nigeria. Five other Corsairs were damaged by AA fire but managed to return to the carriers. Two of these could be repaired on board, the other three were too badly damaged for effective repairs.

Then the Dutch cruiser HrMs Tromp entered Sabang Bay, her rightful waters, with the British destroyers HMS Quilliam, HMS Quality and the Australian destroyer HMAS Quickmatch. In all these four ships fired a total of 8 Torpedos and 208 - 6", 717 - 4.'7" and 668 x 4" shells. Japanese shore batteries obtained 4 hits on the Tromp while Quilliam and Quality were both hit once. The hit by what was thought to be a 3” shell on Quilliam caused minor structural damage but killed one petty officer and wounded four ratings. Quality was hit by what is thought to be a 5” shell which hit the tripod foremast and HA director. One war correspondent was killed and one officer and eight retings were wounded, some of them seriously. Tromp was hit by two 5” and two 3” shells but was lucky that none of these exploded !!!, she suffered only minor structural damage and no deaths or even wounded amongst her crew.

Later that day 13 fighters from the carriers intercepted a Japanese counter attack with 10 aircraft. 7 of these were shot down for no losses of their own. (3)

On the 24th the carriers launched aircraft to attack Padang. They claimed to have sunk a transport and to have damaged two more transports. (4)

The British destroyer HMS Verulam (Lt.Cdr. D.H.R. Bromley, DSC, RN) sailed at 1700 hours to overtake and then join the Task Force. She was joined by HMS Tartar (Capt. B. Jones, DSO and Bar, DSC, RN) as substitute for HMS Penn whose defects could not be repaired in time. Verulam and Tartar eventually joined the Task Force at 1505/11.

During the 13th all destroyers of the Task Force fueled from HMS Emperor, HMS Hunter and HMS Shah. Besides that Task Force 62 was sent out from Trincomalee. This Task Force was made up of the British light cruiser HMS Nigeria (Capt. H.A. King, DSO, RN) and the British destroyers HMS Roebuck (Cdr. C.D. Bonham-Carter, RN), HMS Racehorse (Cdr. J.J. Casement, DSC, RN) and HMS Redoubt (Lt.Cdr. F.W.M. Carter, DSC, RN). HMS Rocket (Lt.Cdr. H.B. Acworth, OBE, RN), which was escorting a convoy, was ordered to leave her convoy and then join this Task Force. Also sailed was Task Force 67, made up of Royal Fleet Auxiliary oiler Olwen escorted by HMS Penn, which by now had completed repairs on her defects.

1740 hours, the 26th Destroyer Flotilla was also detached to return to Trincomalee. By this time all the destroyers of this flotilla had fueled from Force 70.