Destroyer of the Grom class 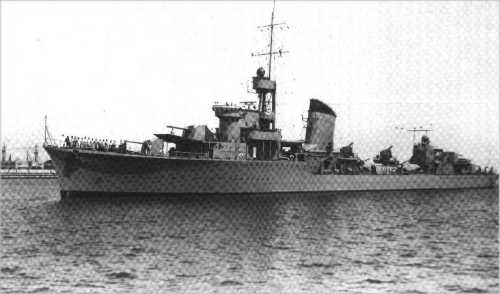 [The composition of the convoy is currently not known to us.]

The convoy was dispersed shortly before midnight during the night of 18/19 September.

HMS Janus returned to Plymouth on 18 September, ORP Grom on 19 September and HMS Jackal on 20 September.

On departure from Halifax the convoy was escorted by the destroyers HMCS Fraser (Cdr. W.B. Creery, RCN) and HMCS Saguenay (Lt.Cdr. G.R. Miles, RCN). They parted company with the convoy on 20 September.

Around 1830/28, HMS Amazon and HMS Juno parted company with the convoy. They took the merchant vessel Arandora Star with them to Plymouth. They arrived at Plymouth very early on the 29th.

The convoy continued on to Liverpool escorted by ORP Grom.

This convoy departed Southend on 21 September 1939 and was dispersed on 24 September 1939 though quite a number of ships had to proceed to ports on the east coast of the U.K.

The convoy was escorted by the British destroyer HMS Jackal (Cdr. T.M. Napier, RN) and the Polish Grom (Lt.Cdr. A. Hulewicz).

They remained with the convoy until the evening of the 24th of September when the convoy was dispersed.

HMS Jackal and HMS Janus returned to Plymouth in the afternoon of the 25th.

9 Oct 1939
Around 2100 hours the British destroyers HMS Griffin (Lt.Cdr. J. Lee-Barber, RN with Capt. G.E. Creasy, MVO, RN aboard), HMS Gipsy (Lt.Cdr. N.J. Crossley, RN), HMS Keith (Cdr. H.T.W. Pawsey, OBE, RN), HMS Boadicea (Lt.Cdr. G.B. Kingdon, RN) and the Polish destroyer Grom (Lt.Cdr. A. Hulewicz, ORP) were ordered to leave Harwich and establish a patrol in the North Sea. Shortly before that, a German He 59 seaplane dropped two magnetic mines nearby, but there was no time for searching. HMS Gipsy hit one of those mines which tore her into two pieces. Most of the survivors were picked up by HMS Griffin and HMS Keith. (1)

6 Nov 1939
Blyskawica (Porucznik Marynarki Tadeusz Gorazdowski, ORP) and Grom (Komandor Podporucznik Aleksander Hulewicz, ORP) received orders to find and rescue downed British pilots in the Dogger Bank area. The Polish ships were attacked by two German He-115 hydroplanes. One of them dropped a torpedo aiming for Blyskawica. The destroyer turned rapidly and avoided the threat.

9 Apr 1940
The Polish destroyers Burza, Grom and Blyskawica were ordered to join the British destroyer HMS Tartar and provide escort for convoy HN-24 (31 merchants escaping from Norway to England, some of them were loaded with Norwegian gold). The convoy reached Britain without any loses. (1)

12 Apr 1940
The Polish destroyers Burza, Grom and Blyskawica entered Rosyth for refuelling. Then they were sent to Scapa Flow. (1)

Bombardment of the Sola airfield off Stavanger.

Early on the 17th this force contacted the submarine HMS Seal (Lt.Cdr. R.P. Lonsdale, RN) which was to act as a beacon to home in the ships.

Between 0513A/17 and 0602A/17, HMS Suffolk bombarded the airfield. Following this she and the destroyers were ordered to proceeded northwards to intercept a reported group of enemy destroyers, the result was that their air cover that was provided during their retirement did not sight the ships which then came under heavy air attack from the German Luftwaffe for about seven hours from 0825A/17 onwards.

The result was that HMS Suffolk was heavily damaged. She suffered 32 dead and 41 wounded. HMS Kipling was also damaged by two near misses.

Air cover finally arrived at 1415A/17 but even then the Germans continued to attack.

19 Apr 1940
The Polish destroyers Burza, Grom and Blyskawica left Scapa Flow and head to Narvik. During a storm Burza was damaged by high waves and forced to return. (1)

HMS Effingham sank the British merhant ship (she had been captured by the Germans when they invaded Narvik) Riverton (5378 GRT, built 1928) inside Narvik Harbour. Otherwise the result of the bombardment was difficult to observe due to the bad visibility. (2)