Monitor of the Roberts class 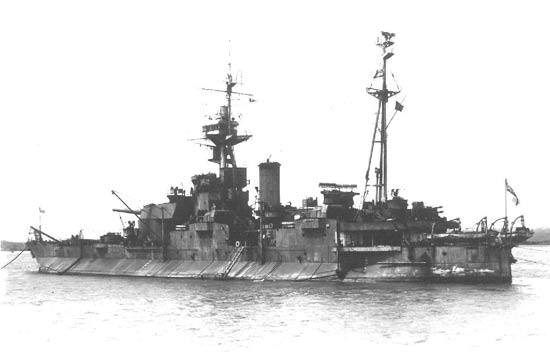 This combined convoy assembled off Oversay on 19 June 1943.

On 21 June HMS Folkestone was detached to return to Londonderry for repairs to defective hull plating.

On 24 June the merchant vessel Dornoch straggled from the convoy. The next day HMS Folkestone was ordered to search for her. She had departed Londonderry to overtake the convoy on 24 June having effected repairs there.

Cover for the convoy during part of the passage was provided by the AA cruiser HMS Charybdis (Capt. G.A.W. Voelcker, RN).

En-route the merchant vessels Baron Ramsay, Merkland and Stanhope were detached to Lisbon as was the Coity Castle which was detached to Huelva.

On 28 June the convoy escort was reinforced by the escort destroyer Holcombe and Viceroy.

The Orangeleaf also was part of KMS 17G as were HMS Abercrombie and HMS Robert.

These were joined by the merchant vessels which had made up convoy OS 50G which had been brought out of Gibraltar by the escortx which took over convoy KMS 17G, except for HMS Columbine which joined convoy OS 50.

The following merchant vessels were then detached to Casablanca; Fort Laird and Fort Senneville.

The merchant vessel Godfrey B. Holt was detached to Bathurst.

9 Sep 1943
Around 1700 hours on this day HMS Abercrombie (A/Capt. G.V.B. Faulkner, RN) drifted into an unswept area and hit a mine amidships. She was supporting the Salerno landings at this moment. It exploded under the starboard bulge abreast of the tripod foremast. The mine opened a hole measuring 20 feet by 12 feet and she took a list of 10 degrees, however, with prompt counter-flooding, she again achieved trim. There was little damage inboard of the bulge. The most significant damage occurred to the fittings. Radar and the main director were put out of commission. She was no longer capable of indirect fire and it was feared that use of the main armament would further weaken her. Her machinery was undamaged so two days later she left for Palermo. She then went to Bizerta and finally to the Taranto dockyard on 7 October.

21 Aug 1944
After the damage from the mine hit on 9 September 1943 was repaired HMS Abercombie arrived at Malta on 15 August 1944. Bad luck continued to follow her as on 21 August, while on an exercise south-east of Malta, she struck two mines. One hit on the starboard bow, creating a hole 16 feet by 4 feet but the other struck the bottom. Although, the hole was only 10 feet by 4 feet, the explosion bent both shafts and broke the starboard support strut. Trawlers found four more German mines in the area. She reached Valetta for another 11 months in the dockyard. After repairs were completed she was sent to the Pacific but had only reached Aden, Yemen when the Japanese surrendered.