Frigate of the Captain class 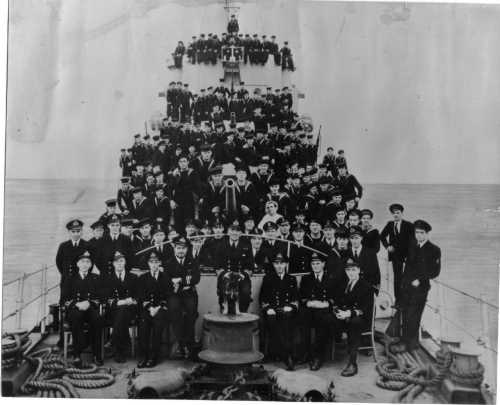 Photograph with thanks to Sheila Baker

Operation Victual passage of convoys JW 59 and RA 59A between the U.K. and Northern Russia, and Operation Goodwood, to provide cover for these convoys and to attack the German battleship Tirpitz in the Kaafjord.

This convoy departed Loch Ewe on 15 August 1944 for Northern Russia.

At 2250B/20, the Archangelsk and the eight Russian destroyers joined the convoy.

Several German U-boats attacked the convoy during its passage. The only success was, U-344 which sank the sloop Kite with two FAT torpedoes (out of three fired) on 21 August. U-344 was sunk the next day by a Swordfish from HMS Vindex and U-354 was sunk on 24 August by HMS Mermaid and HMS Loch Dunvegan.

The convoy arrived in the Kola Inlet on 25 August.

On 2 September 1944, a Swordfish aircraft from HMS Vindex attacked the German U-boat U-394. The German submarine was the sunk by HMS Keppel, HMS Whitehall, HMS Mermaid and HMS Peacock.

The convoy arrived at Loch Ewe on 5 September 1944.

Around 1900B/18, the destroyer HMS Cassandra joined company having first escorted eight Russian destroyers to their rendezvous (see above).

At 0800B/19, HMS Kempenfelt, HMS Zambesi and HMS Cassandra were detached to return to Scapa Flow.

On 20 August the weather was found unsuitable to attack the Tirpitz.

On 22 August another attempt was made to attack the Tirpitz. 32 Barracudas, 24 Corsairs, 11 Fireflies, 9 Hellcats and 8 Seafires took off from the three fleet carriers. During the attacks Tirpitz was not hit. Four German BV-138, one He-115 and two Ar-196 were destroyed. The German submarine U-965 had just left Hammerfest when she was attacked by aircraft from HMS Indomitable. She sustained three dead and eight wounded among her crew and returned to Hammerfest shortly after having sailed. Three British aircraft were lost. Part of ' Force 1 ' then proceeded to a rendezvous with ' Force 9 ' to fuel.

Also on the 22nd, the German submarine U-354 managed to hit and damage HMS Nabob with a FAT torpedo. A T-5 (Gnat) torpedo was then fired to finish off the stricken ship but it hit the frigate HMS Bickerton. The stricken frigate was beyond salvage and was later scuttled by a torpedo from HMS Vigilant. The damaged HMS Nabob was escorted back to Scapa Flow arriving on 27 August together with HMS Trumpeter. On arrival at Scapa Flow they were escorted by the destroyers HMS Kempenfelt, HMS Cassandra, HMS Zest (Lt.Cdr. R.B.N. Hicks, DSO, RN), HMS Venus (Cdr. J.S.M. Richardson DSO, RN) and the frigate HMS Kempthorne. These four destroyers had departed Scapa Flow to rendezvous with the escort carriers and take over escort from the frigates HMS Aylmer, HMS Bligh and HMS Keats which arrived at the Faeroer Islands on the 27th.

On the 24th another air strike was flown off. 33 Barracudas, 24 Corsairs, 10 Hellcats, 10 Fireflies and 8 Seafires were flown off from the fleet carriers but further to the south then the previous attack so as to archive surprise by approaching undetected. This however failed and by the time the actual attack on the Tirpitz started she was completely obscured by smoke the Tirpitz. Two hits were obtained but one bomb did not explode. Also other targets were attacked and some damage was done. Six British aircraft were lost in the attack.

On 26 February part of ' Force 1 ', HMS Duke of York, HMS Devonshire, HMS Myngs, HMCS Algonquin, HMCS Sioux, HMS Scorpion, HNoMS Stord arrived at Thorshavn, Faeroer Islands to fuel. They departed to resume operations on the 27th. HMS Furious and HMS Serapis also arrived at Thorshavn on the 26th but did not departed again. They proceeded from Thorshavn to Scapa Flow on the 28th. They had been joined by the frigates HMS Aylmer, HMS Bligh and HMS Keats.

Also on the 26th, HMS Berwick and HMS Kent were detached to Scapa Flow where they arrived on the 28th.

Also on the 26th, HMS Whirlwind arrived at Scapa Flow having been detached earlier due to engine defects.

Another air attack was carried out on the 29th. 26 Barracudas, 17 Corsairs, 10 Fireflies, 7 Hellcats and 7 Seafires were flown off. Again the Tirpitz was completely covered in smoke. No direct hits were obtained on the battleship but some splinter damage was done. The 7 Seafires claimed results during an attack on Hammerfest. Two British aircraft were shot down by enemy AA fire.

[See the event ' Operation Victual passage of convoys JW 59 and RA 59A between the U.K. and Northern Russia, and Operation Goodwood, to provide cover for these convoys and to attack the German battleship Tirpitz in the Kaafjord ' for 15 August 1944 for more info.] (4)