Minelayer of the Gryf class 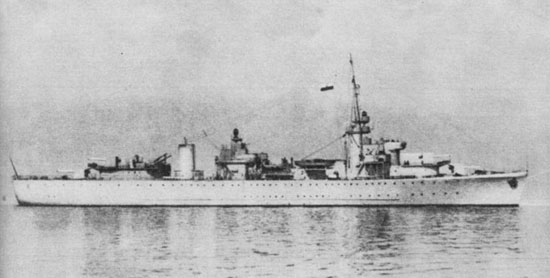 3 Sep 1939
Wicher took part in naval combat off Hela. Two German destroyers, the Leberecht Maa? and Wolfgang Zenker under command of Rear Admiral G?nther L?tjens approached to Polish naval base at Hela and opened fire at 0700hours. Wicher and the minelayer Gryf answered few minutes later. A Polish coastal battery (4 guns of 152mm) was also involved in combat. After short time Germans hit the Gryf twice, but suffered heavy damage on Leberecht Maa?. Wolfgang Zenker (also damaged) laid a smokescreen and both destroyers retreated. The minelayer entered the floating dock for repairs. Later in the morning, Ju.87s of 4/Tr.G.186, an outfit originally intended to embark on the Graf Zeppelin, carried out 2 attacks against the harbour area: At 0910 hrs 11 a/c attacked, Gryf sustained one bomb hit on the bow and several near-misses which set her on fire. The fire reached the AAA ammunition, which detonated, but dock and ship remained afloat. This attack caused 2 deaths. In the second attack, about 1400 hrs, 12 dive-bombers armed with 250-kg bombs targeted both Gryf and Wicher, nearby. The CM sustained one bomb hit which caused her to settle on the bottom of the harbour, burning fiercely. At 1600 hrs, He-59 seaplanes of Ku.Fl.Gr 506 flying out of Kamp-bei-Kolberg, attacked again, and were followed at 1725 by more He-59s of Ku.Fl.Gr 706 which completed the destruction of the wreck. Gryf burned for another 2 days. (1)