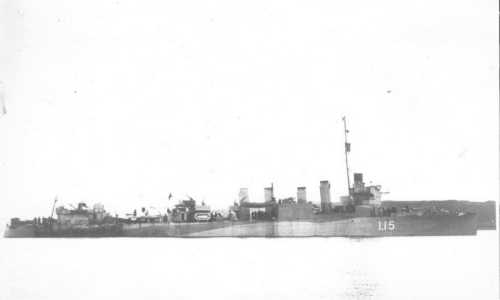 World Ship Photo Library Photograph with thanks to Jan Visser

The convoy was formed at sea at 0830/18 when the two sections made rendez-vous west of Oversay Light.

An additional destroyer, HMS St. Marys (Lt. K.H.J.L. Phibbs, RN), joined the convoy in the afternoon of the 18th.

Destroyer HMS Highlander parted company with the convoy at 0900/20 followed at 1800/20 by the four Canadian destroyers.

Heavy cruiser HMS Devonshire (Capt. R.D. Oliver, DSC, RN) joined the convoy at 1300/23. HMS Norfolk parted company with the convoy at 1600/23 and proceeded to patrol east of the Azores.

The convoy arrived at Freetown on 29 November 1940 escorted by HMS Devonshire and HMS Edinburgh.

HMS Cumberland parted company with the convoy late in the morning of December 4th having been relieved by HMS Hawkins (Capt. H.P.K. Oram, RN).

HMS Hawkins was detached with orders to proceed to Simonstown in the morning of December 8th.

The convoy arrived at Durban on 12 December 1940 escorted by HMS Devonshire.

At 1000/18, the light cruiser HMS Southampton (Capt. B.C.B. Brooke, RN) took over from HMS Devonshire. This last cruiser then set course to return to Durban.

The convoy arrived near Aden on 25 December 1940 but it did not enter the port. HMS Southampton was briefly detached to fuel at Aden after which she rejoined the convoy. The escort was reinforced with the AA cruiser HMS Carlisle (Capt. G.M.B. Langley, OBE, RN) and the destroyers HMS Kandahar (Cdr. W.G.A. Robson, RN) and HMS Kimberley (Lt.Cdr. J.S.M. Richardson, RN). HMS Shropshire was then detached from the convoy and entered Aden.

HMS Carlisle and HMS Kimberey parted company with the convoy on 27 December 1940 and joined a southbound convoy.

The convoy arrived at Suez on 28 December 1940 escorted by HMS Southampton and HMS Kandahar. (1)

Laying of minefield SN 11 off Iceland.

The destroyer HMS Keppel (Lt. R.J. Hanson, RN) departed Scapa Flow in the afternoon to rendezvous with the minelaying force off the Butt of Lewis at 2045/23.

The minelaying force successfully laid the minefield and returned to Port ZA (Loch Alsh) on the 26th minus HMS Keppel which was detached to fuel in Iceland and join the cover force afterwards.

The covering returned to Scapa Flow in the morning of the 29th.

Laying of minefield SN 10A between Iceland and the Faroes.

In the evening of the 7th the minelayers commencing laying minefield SN 10A in Iceland-Faroes gap. Minelaying was completed on the 8th. At total of about 2030 mines had been laid.

The Repulse group was to the north-east of the minelaying to provide cover.

Both forces returned to their bases on December 10th. Weather had been bad and many of the destroyers had sustained some weather damage.

This convoy departed U.K. ports on 18/19 December 1940. Destination for the majority of the convoy was Suez where the convoy arrived on 16 February 1941.

Around 2300/21 all destroyers parted company with the slow part of the convoy.

The destroyers of the fast portion of the convoy were detached during the night of 21/22 December 1940.

At dawn on 23 December 1940 the slow and fast part of the convoy made rendez-vous and proceeded in company.

On the 24th, HMS Naiad parted company to return to the U.K. The heavy cruiser HMS Berwick (Capt. G.L. Warren, RN) and the light cruiser HMS Dunedin (Capt. R.S. Lovatt, RN) both joined the escort of the convoy.

At dawn on the 25th the convoy was attacked by the German heavy cruiser Admiral Hipper. She had made contact with the convoy with radar the previous day and had already made a torpedo attack shortly before 0400/25 but no hits had been obtained nor had the attack been noticed by the British.

Then shortly after 0800/25 she made visual contact with the convoy and it came as a surprise to the Germans to sight HMS Berwick.

Around 0830 hours the Germans opened fire on HMS Berwick but due to the bad visibility she soon shifted target to the troopship Empire Trooper which was not in her assigned station. The troopship was slightly damaged as was the merchant vessel Arabistan.

The convoy was ordered to scatter and HMS Berwick and HMS Bonaventure both engaged the German cruiser as did the corvette Cyclamen briefly.

Meanwhile HMS Dunedin laid a smokescreen to cover the ships of the convoy. HMS Furious flew off a few aircraft but these failed to find the German cruiser in the bad visibility.

HMS Berwick was damaged by gunfire from the German cruiser but she forced, together with HMS Bonaventure, the enemy to break off the action around 0915 hours.

In the evening HMS Boneventure was detached to search for the damaged Empire Trooper.

On the 28th the convoy was reassembled at sea (minus Empire Trooper which was ordered to proceed to Gibraltar via the Azores) and continued on to Freetown where it arrived on 6 January 1941. (1)

Around 2100Z/4, the battleship HMS Rodney (Capt. F.H.G. Dalrymple-Hamilton, RN) departed Scapa Flow to provide distant cover for the operation. She was escorted by the destroyers HMS Inglefield (Capt. P. Todd, DSO, RN), HMS Echo (Cdr. S.H.K. Spurgeon, DSO, RAN), HMS Electra (Cdr. C.W. May, RN) and HMS Brilliant (Lt.Cdr. F.C. Brodrick, RN). On leaving Scapa Flow they were joined by the light cruiser HMS Nigeria (Capt. J.G.L. Dundas, RN) which was to provide close cover for the auxiliary minelayers. HMS Nigeria was already at sea as she had been participating in exercises earlier on the day.

At 0845Z/5, HMS Nigeria parted company with HMS Rodney and her escorting destroyers.

At 1353Z/5, HMS Menestheus exploded a drifting mine in her port paravane which resulted in engine damage. She was unable to proceed and was taken in tow by HMS Agamemnon to return to Port ZA escorted by HMS Charleston and HMS St. Albans. They arrived at Loch Alsh around 1115Z/7.

Mines were laid on the 6th. The intended minefield was now only partially laid.

The minefield was completed in a later minelaying operation (SN 7B). (2)