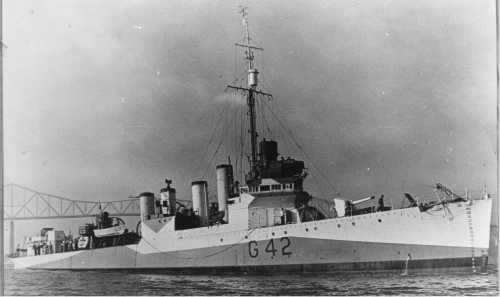 HMS Lincoln after a refit at the Charleston Navy Yard in 1943.

World Ship Photograph with thanks to Jan Visser.

Hunt for the German pocket battleship Admiral Scheer after the attack on convoy HX 84.

In response to the attack on convoy HX 84 by the German pocket battleship Admiral Scheer the Admiralty acted quickly.

At 1050/6 the force split up; HMS Hood, HMS Naiad, HMS Phoebe, HMS Somali, HMS Eskimo and HMS Punjabi proceeded to patrol off the Bay of Biscay to cover the approaches to Brest and Lorient.

Shortly before midnight during the night of 6/7 November HMS Rodney was detached to escort to escort convoy HX 83 and once this convoy was safe, HX 85 from Halifax.

Three armed merchant cruisers, which were on patrol were recalled to port on the 8th. These were HMS Chitral (Capt.(Retd.) G. Hamilton, RN), which was to the northwest of Iceland and HMS California (Capt. C.J. Pope, RAN) and HMS Worcestershire (A/Capt. J. Creswell, RN), which were to the south of Iceland. The light cruiser HMS Southampton was ordered to take over the place of HMS Chitral. She split off from HMS Nelson at 1600/8. HMS Worcestershire joined HMS Nelson and her escorting destroyers around 1500/9.

There were also the destroyers HMS Churchill (Cdr.(Retd.) G.R. Cousins, RN), HMS Lewes (Lt.Cdr. J.N.K. Knight, RN), HMS Lincoln (Cdr. A.M. Sheffield, RN) and HMS Ludlow (Cdr. G.B. Sayer, RN). They were en-route to the U.K. and had departed Halifax on 31 October and refuelled at St. Johns on 3 November. After receiving distress signals from ships in convoy HX 84 they rushed to the reported location. The only thing they found was an empty lifeboat. They then continued their Atlantic crossing and arrived at Londonderry on 9 November.

The destroyer HMS Stanley (A/Lt.Cdr. R.B. Stannard, VC, RNR) had departed Halifax on 1 November and St. Johns on 5 November. Now she and the Canadian destroyer HMCS St.Francis (Lt.Cdr. H.F. Pullen, RCN) escorted convoy HX 85, which had been recalled, back to Nova Scotia.

On 8 November, after machinery defects had been repaired, the heavy cruiser HMAS Australia (Capt. R.R. Stewart, RN) departed the Clyde to protect convoys.

On 11 November, HMAS Australia relieved Renown from covering convoy HG 46 and Renown arrived back at Gibraltar around 1515/12. Renown had been joined at 0807/12 by the destroyers HMS Duncan (Cdr. A.D.B. James, RN) and HMS Forester.

Battlecruiser HMS Repulse escorted by the destroyers HMS Matabele and HMS Electra arrived at Scapa Flow for refuelling around 1100/11.

Battlecruiser HMS Hood, light cruisers HMS Naiad, HMS Phoebe and the destroyers HMS Somali, HMS Eskimo and HMS Punjabi returned to Scapa Flow around 1400/11 for refuelling. HMS Eskimo had suffered weather damage to her asdic dome and had some forecastle deck plates buckled. She was docked for repairs in the floating drydock at Scapa Flow from 13 to 16 November.

HMS Bonaventure returned to Scapa Flow on the 19th with weather damage.

HMS Repulse, HMS Naiad departed Scapa Flow around 1330/12 for patrol and also to provide cover for ships of the Northern Patrol. They were escorted by the destoyers HMS Sikh (Cdr. G.H. Stokes, RN), HMS Mashona, HMS Matabele and HMS Punjabi.

HMS Naiad parted company on the 13th to proceed to Jan Mayen Island where a German weather / wireless station in Jameson Bay was to be raided.

HMS Repulse returned to Scapa Flow at 0015/19 being escorted by the destroyers HMS Ashanti (Cdr. W.G. Davis, RN), HMS Mashona and HMS Matabele. They had provided cover for HMS Naiad during her raid on Jan Mayen Island.

Battleship HMS Rodney arrived at Scapa Flow around 1500/23rd. She had been joined at dawn the previous day by the destroyers HMS Beagle, HMS Brilliant, HMS Bulldog and HMS Electra. (1)

This convoy departed U.K. ports on 7 January 1941 for variuos ports in the Far East and Mediterranean (see below).

Four of these ships departed Avonmouth on 7 January and six sailed from Liverpool. These ships anchored in Moelfre Bay for several days as the eleven ships that were to be sailed from the Clyde could not do so due to thick fog.

The Avonmouth (Bristol Channel) section of the convoy had been escorted to Moelfre Bay by the destroyer HMS Vansittart (Lt.Cdr. R.L.S. Gaisford, RN).

The ships and their escorts anchored in Moelfre Bay from 8 to 11 January. The escorts remained there for A/S patrol and AA protection and were joined by the destroyer HMS Foresight (Lt.Cdr. G.T. Lambert, RN) which had departed Liverpool on the 8th and the light cruiser HMS Naiad (Capt. M.H.A. Kelsey, DSC, RN, flying the flag of Rear-Admiral E.L.S. King, CB, MVO, RN) which came from the Clyde.

When it became clear that the ships from the Clyde were finally able to sail the ships in Moelfre Bay sailed for Lough Foyle (near Londonderry, Northern Ireland) to take on board additional water.

The ships from Lough Foyle and the Clyde made rendez-vous at sea on 12 January and course was then set to Freetown.

The light cruiser HMS Emerald (Capt. F.C. Flynn, RN) departed Plymouth on 12 January. She joined the convoy around noon on the 15th. Shortly afterwards HMS Naiad then parted company with the convoy and proceeded to Scapa Flow where she arrrived around 1430/17.

HMS Phoebe and HMS Fearless also parted company with the convoy escorting the Capetown Castle and Monarch of Bermuda to Gibraltar where they arrived in the afternoon of the 18th. On the 17th they were joined by the destroyer HMS Forester (Lt.Cdr. E.B. Tancock, RN) and on the 18th by two more destroyers; HMS Duncan (A/Capt. A.D.B. James, RN) and HMS Fury (Lt.Cdr. T.C. Robinson, RN).

At Gibraltar the two troopships took on board troops from the damaged troopship Empire Trooper. They departed Gibraltar for Freetown on 19 January being escorted by the destroyers HMS Fury, HMS Fearless and HMS Duncan until 21 January when they parted company. Both troopships arrived at Freetown on 26 January escorted by HMS Faulknor (Capt. A.F. de Salis, RN) and HMS Forester.

Meanwhile convoy WS 5B had coninued its passage southwards.

On the 16 January all remaining destroyers parted company.

HMS Ramillies parted company with the convoy on 17 January.

The troopship / liner Duchess of York was apparently detached at some point.

The Capetown section departed that place on 12 February and the Durban section on 15 February after which a rendez-vous of Durban was effected.

The remainder of the convoy continued on Suez escorted by HMS Australia and HMS Hawkins (Capt. H.P.K. Oram, RN) which joined the convoy shortly before HMS Emerald and the four troopships for Kilindini / Mombasa were detached, arriving on 3 March. The sloop HMAS Parramatta (Lt.Cdr. J.H. Walker, MVO, RAN) provided A/S escort during the passage through the Red Sea. The convoy arrived at Suez on 3 March 1941.

Convoy WS 5BX, now made up of the troopship Aquitania (British, 44786 GRT, built 1914) and Empress of Japan, departed Bombay for Singapore on 5 March escorted by HMS Enterprise. The convoy was joined on 8 March by the light cruiser HMS Durban (Capt. J.A.S. Eccles, RN). HMS Enterprise left the convoy on 9 March. The convoy arrived at Singapore on 11 March. HMS Durban had parted company with the convoy the day before.

This convoy departed Bermuda on 21 January 1941 for the U.K. It was to proceed direct from Bermuda to the U.K. unlike all the other BHX convoys which merged with HX convoys. The convoy arrived in U.K. waters on 9 February 1941.

On departure from Bermuda the convoy was escorted by the armed merchant cruiser HMS Alaunia (Capt.(Retd.) H.J. Woodward, DSO and Bar, RN).

At 1240Q/24, the merchant vessel Oakworth was ordered to proceed to Halifax as she had developed a serious leak in no.1 hold.

The merchant vessel Treworlas arrived at St. Johns, Newfoundland on 30 January 1941 with weather damage. She had most likely detached from the convoy on 27 or 28 January 1941 after the convoy had encountered heavy weather near Greenland.

At 1900N/3, the tanker Athelempress was detached to Reykjavik, Iceland where she arrived on 5 February.

At 0815N/4, HMS Alaunia parted company with the convoy.

Around 1200A/9, the destroyer HMS Lincoln (Lt. R.J. Hanson, RN) was sighted which apparently joined company.

Around 2000A/10, HMS Furious, HMCS Restigouche and HMS Beagle parted company to proceed to Belfast. After escorting the aircraft carrier there the destroyers continued on the the Clyde.

Around 0300A/11, HMS Wolsey was detached to Londonderry.

The Narkunda with HMS Argus, HMS London, HMCS Sauguenay, HMS Viscount and HMS Lincoln arrived in the Clyde in the morning of the 11th. (3)

The merchant vessel Empire Advocate (British, 5787 GRT, built 1913) joined at sea on 25 April near the Azores.

Ocean escort was provided by the light cruiser HMS Dragon (Capt. R.J. Shaw, MBE, RN) until being relieved around noon on the 19th by HMS Fiji (Capt. P.B.R.W. William-Powlett, RN) which then remained with the convoy until May 1st.

On 20 April the Armed Merchant Cruiser HMS Dunnottar Castle (Capt.(Retd.) C.T.A. Bunbury, RN) joined the convoy and she remained with it until May 11th.

20 May 1941
At 21.24 hours on 20 May 1941, the British merchant Javanese Prince is torpedoed and sunk by German U-boat U-138 155 nautical miles north-west of the Butt of Lewis, Outer Hebrides. One crew member was lost. The master, 45 crew members, eight gunners and four passengers were picked up by the British destroyers HMS Faulknor (Capt A.F. de Salis, RN), HMS Lincoln (Lt. R.J. Hanson, RN) and the British rescue tug HMRT Assurance (Sub.Lt. E.E. Litts). All survivors were transferred to the British rescue ship Toward and landed at Gourock on 28 May.

On departure from Bermuda convoy BHX 129 was escorted by the armed merchant cruiser HMS Ranpura (A/Capt.(Retd.) H.T.W. Pawsey, OBE, RN) which was then detached.

On 4 June 1941, HMS Repulse parted company with the convoy having been relieved by the heavy cruiser HMS Suffolk (Capt. R.M. Ellis, RN).

On 7 June the corvettes HMCS Chambly, HMCS Collingwood and HMCS Orillia were detached.

On 10 June HMS Alisma was detached.

On departure from Halifax the convoy was escorted by the destroyer HMCS Annapolis (A/Lt.Cdr. F.C. Smith, RCNR).

The battleships HMS Revenge (Capt. L.V. Morgan, CBE, MVO, DSC, RN) also departed Halifax late on the 10th and joined the convoy at sea early on the 11th after which HMCS Annapolis parted company to return to Halifax.

They had been escorted by the armed merchant cruiser HMS Maloja (A/Capt. V. Hammersley-Heenan, RN) which then parted company.

Around 1200O/18, HMCS Restigouche and HMCS Columbia parted company with the convoy.

In the morning of the 15th the destroyer HMCS Restigouche (Cdr. H.N. Lay, RCN) joined to guide the convoy towards convoy HX 132.