Destroyer of the L'Adroit class 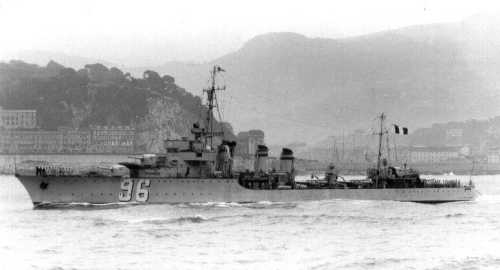 Operation Klaxon, the evacuation of troops from Namsos.

The force lead by Vice-Admiral Cunningham arrived off the Norwegian coast near Namsos on May 1st.

HMS Maori had been sent on ahead and reported fog. HMS Kelly, HMS Grenade, HMS Griffin and Bison were ordered to join her.

When entering the Namsenfjord in fog on 2 May 1940, HMS Maori is bombed and damaged from near misses. She had to retire for temporary repairs but was able to participate in the evacuation during the next night. The evacuation attempt was then postponed to the night of 2/3 May.

On 2 May the force was reinforced by the AA cruiser HMS Carlisle (Capt. G.M.B. Langley, OBE, RN).

In the evening of 2 May the force entered the Fjord to embark troops except HMS Devonshire, Montcalm, HMS Grenade, HMS Griffin, HMS Hasty and HMS Imperial which remained at sea to cover the operation.

A total of 1850 British, 2345 French, some Norwegian troops and 30 German prisoners were evacuated. The evacuation was completed around 0445/3.

Heavy German air attacks developed when the Force was leaving the area. The attacks concentrated on the Devonshire and Montcalm but they were not hit.

The French destroyer Bison was hit at 1010 hours in position 65°42'N, 07°17'E and her forward magazine exploded blowing off the fore part of the ship.The survivors were rescued by HMS Grenade, HMS Imperial and HMS Afridi The wreck was then scuttled by HMS Afridi.

But the attacks continued and at 1400 hours HMS Afridi was hit in position 66°14'N, 05°45'E and sank around 1445 hours. Her survivors were picked up by HMS Griffin and HMS Imperial.

All forces arrived at Scapa Flow in the evening of May 4th or the early hours of May 5th. (1)