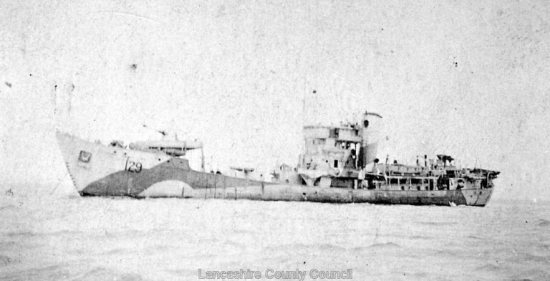 4 May 1943
HMS Northern Spray (Lt. F.A.J. Downer, DSC, RNR) was part of the escort of convoy ONS-5. At about 2000hours, U-707 surfaced after letting the convoy pass overhead, and fired a salvo of three torpedoes, hitting British merchant North Britain. Northern Spray hurried to assist, but the merchant sunk in 69 seconds, and could only pick up 11 survivors. Later on, U-628 was the attacker. After weaving unseen past the escorts, she fired a salvo of torpedoes aimed at five targets, but scored only one hit, at the British merchant Harbury. As she was settling by the stern, the skipper (Cpt. W.E. Cook) gave the order to abandon ship, and it was again Northern Spray that came to the rescue, picking up 42 survivors (7 were missing). Later, U-264 took over in attack, and hit two ships: The American West Maximus (5.561 ton), and British Harperly. Northern Spray rescued 56 survivors from lifeboats of the former (4 crewmen were missing), and 38 from the second. The by then overcrowded Northern Spray was ordered to disengage from the convoy and make for St. John's, which she did safely on May 8th. (5)

After a few hours Northern Spray reports that her Asdic is out of commission and both ships returned to Scapa Flow. (6)